Franco is back! - Streets Of Toronto
Skip to content 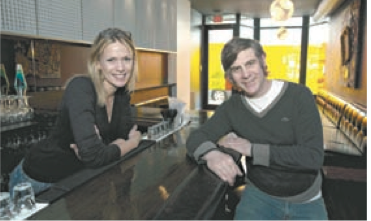 The restaurant is located directly across from Centro in the Yonge and Eglinton area, and should be opening early this month.  “We figured the neighbourhood could really use another Italian restaurant,” Agostino says and laughs. The restaurant takes over for Chakra, an Indian restaurant that closed up three months ago.

After selling his last venture, Imperia in Yorkville, and facing a stressful time in his personal life, Agostino spent the last year in and out of Italy reconnecting with friends and family and working in small villages off the beaten path.

“I ended up cooking with these old women in 10 villages,” Agostino explains. “They make everything by hand, and some of the recipes are hundreds of years old. It was the most fascinating time, just wonderful.”

Agostino plans on bringing in different ingredients and putting them front and centre on the new menu. “Ingredients will be very highly respected on this menu — ingredients and the seasons," he says.  Teh restaurant has 80 seats in the dining room and 40 in the bar area.

Danny Farbman had a culinary pedigree long before opening the doors to his latest eatery, Shoom Shoom, on Bayview Avenue north of Steeles in Thornhill. Alongside his father, Farbman launched and runs the What A Bagel chain in the GTA, and he also opened Mashu Mashu in the lower Forest Hill village. His latest effort doesn’t stray far from a tried-and-true concept: grilled meals and fresh Middle Eastern salads — affordable, fresh and delish.

Shoom Shoom, which translates to “Garlic Garlic,” is a family restaurant with 120 seats open every day, serving brunch seven days a week from 11 a.m. to 3 p.m. “I like this neighbourhood,” says Farbman, of the Thornhill community he is hoping to serve from his new locale.

Grease is the word

The opportunity to sample all the menu items on offer at BMO Field during this year’s Toronto Football Club season was too good to pass up. Then again, after consuming enough greasy food to feed a small village, I felt like passing out.

The event, with chef Robert Bartley expertly guiding the samplers, introduced a number of new menu items alongside the tried-and-true staples that the TFC faithful devour with gusto. The first being something called a Chip Butty. Translation: French fry sandwich with white bread and butter. The “Butty” was followed up by an onslaught that included something called a Scotch egg (hard-boiled egg, ground beef encased in panko bread crumbs and fried), curry fries and fried mac ’n’ cheese fritters. By the time the Nathan’s Famous hot dog was rolled out, it actually seemed like a healthy alternative (It’s not!). This was followed up by a chicken roti that was, that’s right, fried. The star of the day was the simple, and very Toronto, peameal bacon sandwich, along with a tangy meatball sandwich and a grilled vegetable ciabatta.

The concept is a simple one: hand-held food that complements the consumption of cold beer. None of the items required use of a fork or knife, and most would be ideal at the end of a long night at the pub.

Where do the aging patrons of the venerable Queen West hard rock lounge Bovine Sex Club go when they grow up? That question inspired the creation of Watusi, a new restaurant and bar on red-hot Ossington Avenue.

Located in a former karaoke bar, Watusi features a ’50-’60s vibe, and an eclectic dinner menu complemented by serious cocktail offerings. Fans of the hit TV show Mad Men should have no trouble envisioning the concept.

Watusi is the brainchild of North Yorker Darryl Fine, owner of Bovine as well as Shanghai Cowgirl, who often drives Ossington to and from work on Queen West from his home near St. Clair and Christie.

“I noticed this older fellow sitting in front who kind of looked like Frank Sinatra sitting in front of this blacked out karaoke bar,” says Fine. “I stopped and asked him if he was having trouble renting out the space.”

Fine and his wife Jill Dickson partnered up with Alan Thomson (Sotto Voce) to develop the campy cocktail lounge theme. Characterized by a cool, retro design assisted by John Tong, of 3rd Uncle design, Watusi features an upscale, bistro menu for the dining set and a cool cocktail list for the lounge crowd.

“We wanted to do something people weren’t doing,” says Fine. “It is more of a blend of dining and night life. It’s pretty diverse — grown-up Bovine and Cowgirl customers meet displaced College Street hipsters.”

Acclaimed chef Michael Stadtländer will be preparing a special all-Ontario tasting menu at Globe Bistro for one night only along side Globe chef Kevin McKenna.

Tickets for the May 6 event are $175 with proceeds to support Toronto East General Hospital Foundation.  For more information phone 416-466-2000.

The estimable Perigee, in Toronto’s Distillery District and owned by Victor Brown, closed its doors last month. From opening in 2003, Chef Patrick Riley garnered acclaim for his inventive cuisine and expansive tasting menus until his departure in 2007. Chris Brown, one of the two sons of the owner working at Perigee, took over the kitchen in 2007 and it didn’t skip a beat. Michael Brown handled sommellier duties.

CopaCabana, the “authentic Brazilian Churroscaria,” based in Niagara Falls is rumoured to be opening up shop in Midtown on Eglinton Avenue East.