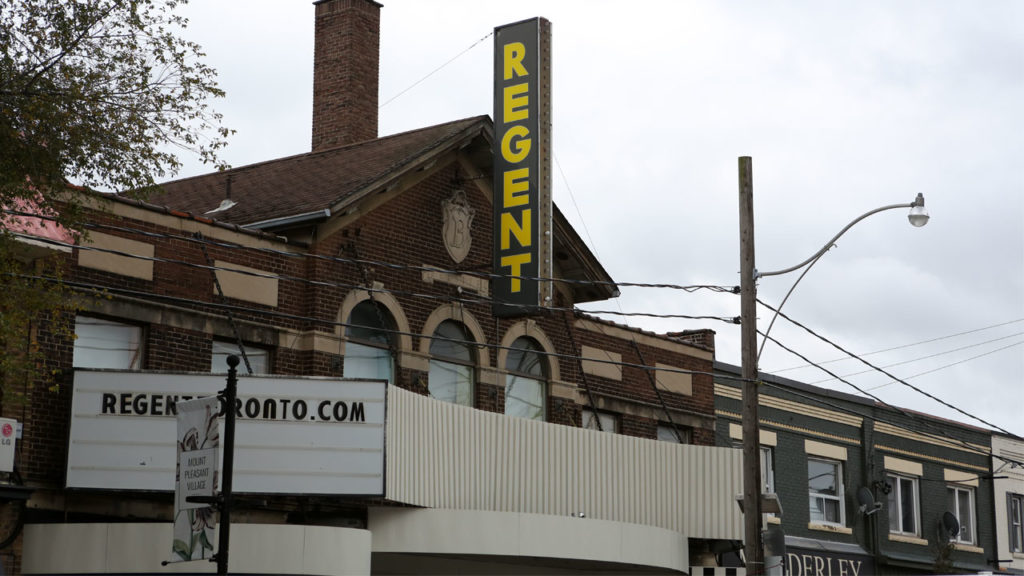 The City of Toronto, alongside local councillor Jaye Robinson, is making a move to designate the building at 551 Mount Pleasant Rd. as a heritage property.

The building, formerly home to the Regent Theatre, was purchased by Terra Bruce Productions for $7.4 million. The plan was to use the space for live theatre — the venue’s original use when it first opened in 1927 before it became a movie theatre.

“Everybody involved recognizes that it has significant heritage value both for the community and the City of Toronto,” said Bob Hallett, Terra Bruce’s chief operating officer. “And that maintaining as much of the various heritage aspects as we can is desirable.”

Hallett also confirmed that there is no plan to add a residential component to the facility.

And that is Robinson’s vision as well. “We don’t want a condo here. We want a theatre,” she said.

“Midtown lacks arts and culture desperately — it’s all downtown. And midtown is growing by leaps and bounds,” said Robinson. “We need amenities and we need infrastructure, and part of the amenities is some arts and culture in this area. We want the theatre, so we’re going to push them [Terra Bruce] and keep them on the straight and narrow on it.”

The new heritage designation, which was scheduled for a vote by Toronto City Council in late September, would afford the property much more protection than the previous heritage listing, Robinson said.

“We’ve been working over the summer with them, the heritage staff as well as the owners. And I think we’ve come to a good place,” she said. “A lot of people really push back when you go to designate because it’s a lot more a clamp down, a lot more forceful, but if there’s some flexibility, then you collaborate. They’ve been great.”

The heritage designation still allows the new owners to do a lot of work on the site, including the interior and back of the building while protecting the heritage attributes and facade.

The theatre was constructed “in 1927 to the designs of architect Murray Brown as a vaudeville theatre and cinema for Famous Players Canada,” reads a city staff report. “The property is a fine and surviving example of an early 20th-century purpose-built theatre along a neighbourhood main street, a typology that was once common but is becoming increasingly rare.”

“This is a very prominent piece of the Mount Pleasant strip that’s been there for a long time,” Robinson said. “And so we’re going to do everything we can to maintain it.”