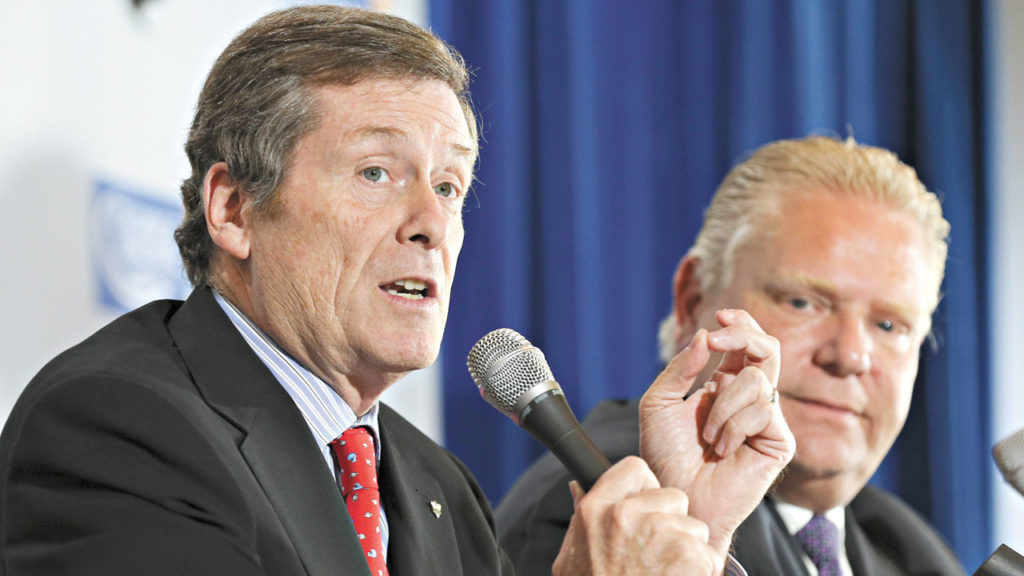 When Bill 39, The Better Municipal Governance Act — how’s that for an Orwellian title! — was introduced into the Legislature on Nov. 16, Mr. Tory endorsed it. The bill allows him as mayor to enforce a bylaw that he deems as a provincial priority if it has the support of only one-third of city council members.

Worse still, he admitted he suggested to Premier Ford this idea of governing with minority support.

Even worse still, he told that to the premier before the October 24 municipal election and didn’t say a word about it on the election trail.

He has lost the confidence of anyone in Toronto who believes in the democratic principle that decisions are made by majority vote, not by some rump faction. Government by a minority is wrong.

As mayor, he has the power to ensure that one-third of councillors are always on his side. He can reward his supporters by offering them committee chairs. The Strong Mayors Act already gives him the power to set the budget, so his supporters could get community facilities denied those in the majority of council.

He has always sold himself as Mr. Nice Guy. Now we know that is not true. He is not someone who can be relied on to accept decisions made by the majority.

His excuse is that he won’t use the power often and that he is enforcing provincial priorities.

Those priorities have been made shockingly clear in Premier Ford’s legislation rolled out since it was elected in June. One clear priority is the dismantling of democratic structures and processes. Many people have been denied the opportunity to address legislative committees on various bills, a previously fundamental principle of provincial democracy.

Bill 23 eviscerates many municipal powers, as well as conservation authorities, but the four days of hearings meant that perhaps 100 or more of those who had asked to speak (the number has been kept secret by the government) were denied that opportunity. Even the Association of Municipalities of Ontario was denied that chance. Not a single municipal council in Ontario could respond to that legislation since the hearings were in the interregnum when the old council was functus and the new council had yet to be sworn in.

Another provincial priority is to wreak havoc on municipal governments, taking powers away from councillors in the Stronger Mayors Act, appointing regional chairs, and stripping from municipal councils about  $1 billion in annual development charge revenues.

A third priority of the provincial government is to align itself hook, line and sinker with the development industry, which has taken out full-page newspaper advertisements lauding Bill 23, a wish list wiping out anything which might stand in the developers’ way. Apart from some provincial agencies, only developers can appeal Council decisions. Residents and community groups cannot appeal.

Those are the priorities John Tory is buying into. None of these issues was mentioned or debated in the provincial or municipal elections. They do not have a public mandate. They surely do not have the support of a majority of those elected to Toronto City Council. Conservative Party legislators support them because their party and Premier require it, but if they had mentioned any of them during the election they would never have been elected.

John Tory does not deserve to be mayor of Toronto. After eight years in office, he has worn out his welcome. If he had any interest in the future of good governance in Toronto, he would announce his resignation before the new council is inaugurated on Nov. 23.

John Sewell is a former mayor of Toronto.