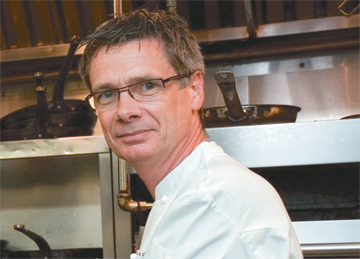 Forest Hill fine dining fave Scaramouche has signed a new lease on their current location, putting to rest talk of the restaurant closing or moving to a new neighbourhood.

“Friends and clients have been asking us where Scaramouche will move, so I’m pleased to finally report that we’re staying where we are,” says Keith Froggett via a press release. “This is a great way for Scaramouche to celebrate its thirtieth anniversary, and we look forward to our next decade of operating a successful and vibrant restaurant.”

Former Centro chef takes over the kitchen at Brassaii

From a venerable dining institution with a quarter-century of fine dining history to a King West hot spot trying to balance upscale cuisine with a lounge vibe, when Bruce Woods decides to make a change, he doesn’t fool around. “It’s been a big part of my life and my career,” says Woods, of his decade in the Centro kitchen. “But I’m having a good time. It [Brassaii] is not as fussy.”

The restaurant underwent a makeover, courtesy of The Design Agency, that plays to the historic property’s brick and wood strengths, and relaunched last month. Woods has been tweaking the menu since taking over the kitchen in December and is looking to align the cuisine with the needs of the majority of the clientele in the entertainment district. “It is not too high end.We didn’t want to scare away the casual client,” says Woods.

“It is great as it is right now,” he explains, “but it is going to evolve into something a bit more complex.” Woods has no problem working in any cuisine, coming from what he describes as “dried-out roast beef and canned peas” while growing up in the small town of Beaverton, Ont. Following his graduation from George Brown College, Woods worked at Centro as well as stints at restaurants in Scotland, Italy, Vancouver and Whistler.

Deep in the dark recesses of La Cascina Ristorante, the Del Russo clan prepare a special pasta with a recipe that has been in the family for generations. A recipe only two people know: chef Luca del Rosso’s mother and grandmother.

“We are very unique,” says Sharifa Jordan, who runs the restaurant with her husband Luca. “The concept is based on agritourismo in Italy.”

According to Jordan, the restaurant’s menu will change daily for lunch and dinner, and everything is made from scratch with local, fresh ingredients and specialty items imported from Italy.

The couple’s first restaurant opened in Woodbridge after Del Rosso moved to Canada from a small town in the Abruzzo region of Italy. But they sold the operation after deciding they wanted to work closer to their home in the Yonge and Highway 401 area. Entrees range from $12 to $37.

Little has changed in the original dining room, says Kaluski, pointing to its Mediterranean menu, its kitchen and wait staff and its warm interior. Even the former owner of 18 years has stayed on as maître d’. One new touch has been the addition of a features menu that looks beyond the Mediterranean and explores cuisine from around the world.

Kaluski also leased the two-bedroom apartment above the restaurant, which he has transformed into a private dining room and a lounge. The two intimate new spaces feel more like they’re rooms in someone’s home than rooms in a restaurant, he says.

After 10 years in business, the owners of Sapori Trattoria decided it was time for a change.With the restaurant’s recent makeover, it has taken on a new name, Osteria, says co-owner Luigi Beccati.

The complete reinvention has taken it from fine dining establishment to casual Italian eatery, he says. It was a natural transition given the economic climate.

Both the aesthetic of the restaurant and menu offerings have changed. However, some of its old favourites are still available upon request, such as the veal chop. Although the new menu has introduced lower prices, the quality of the food remains the same, says Beccati.

Thompson Toronto hotel amongst others might be importing culinary bright lights from south of the border, but the Ritz- Carlton will feature a local chef helming the kitchen of their signature restaurant this summer.

An Aroma Espresso Bar is rumoured to be coming to the Forest Hill Village in the coming weeks, but nothing is finalized. The rumours have been confirmed, and Mark McEwan is indeed opening a new, casual Italian restaurant across from his gourmet food shop in the Shops at Don Mills complex.