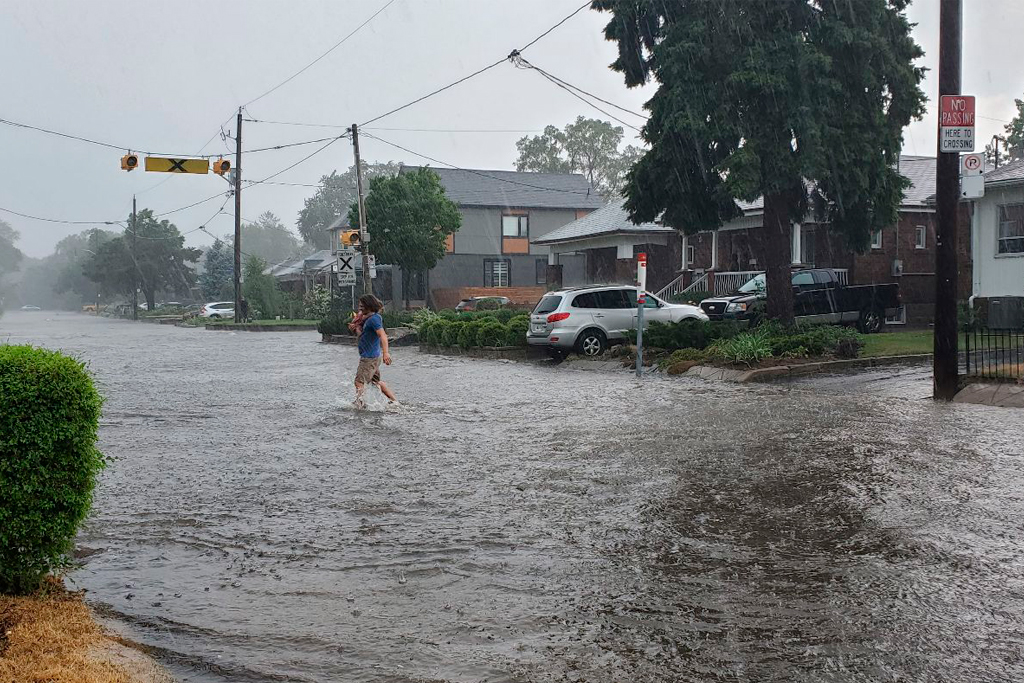 A severe thunderstorm on Wednesday afternoon has resulted in flooding and power outages across  Toronto.

According to the Toronto and Region Conservation Authority, there was 65 millimetres of rainfall within a half-hour period yesterday across the city of Toronto in the area of Highways 400 and 401, Black Creek, and within North York. There were reports that the sudden downpour resulted in broken banks and evacuated townhouses in Black Creek near Weston Road and Humber Boulevard North and Black Creek Drive and Lawrence Avenue West.

our street in toronto after last night’s storm…thankfully our house didn’t flood, but many did. what a mess pic.twitter.com/3znHWk8I5q

At Oakdale Road and Sheppard Avenue West, the flood caused three cars to stall in rising water, and there were reports of stalled cars at Jane Street and Chalkfarm Drive.

In the Keele and Lawrence area, the Toronto Police Operations warned about flooding and advised residents to avoid low-lying roadways, as there were reports a person was spotted in a canoe on the roadway and cars floating away.

One hour rain fall, and flash floods. Don’t do this to your car! I don’t get how he didn’t flood the engine! #toronto pic.twitter.com/l1JVJfL9LA

In addition to the flooding, Toronto Hydro reported power outages across the city, with about 45,000 customers losing power on Wednesday afternoon. As of Wednesday night, they restored power to all but 1,800 customers.

When crews arrive on site, they’re often finding damage like tree limbs on wires & damage that requires complex, lengthy repairs. If you come across crews working in your community, please practise physical distancing & avoid approaching them to help ensure your safety & theirs.

A fire also broke out in the Bethnal Avenue and Ballacaine Drive area in Etobicoke late Wednesday afternoon as a result of downed trees and hydro wires, although no injuries were reported.

The flooding occurred on the seven-year anniversary of the July 8, 2013 extreme weather event that dumped a record 126 millimetres of rainfall on Toronto in about 90 minutes, resulting in the worst flooding the city has endured since Hurricane Hazel in 1954.

7 years ago today, Toronto experienced one of the most severe floods in history. Here are some photos of that day: pic.twitter.com/262Ey45X7b