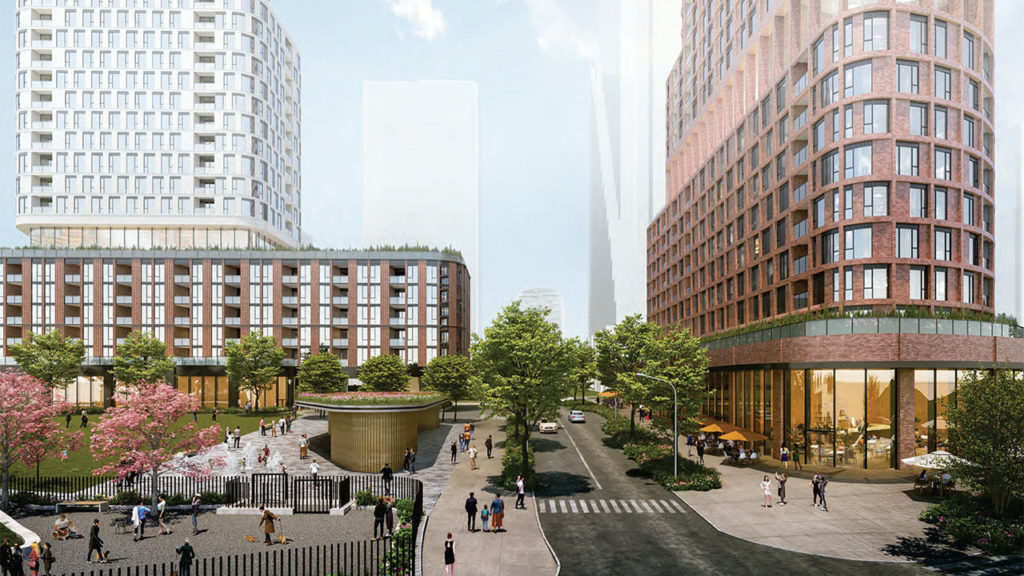 A five-tower condo community is being proposed at Leslie Road and Eglinton Avenue, near the Ontario Science Centre.

The site now holds two car dealerships and is surrounded by greenspace, including Sunnybrook Park and Wilket Creek Park. The proposal submitted in September by Rowntree Enterprises, which has a background in car dealerships, calls for five towers ranging from 13 to 29 storeys, totalling 1,846 residential units.

A 2,734 square metre public park – about 10 per cent of the total site area – is included in the centre of the towers, and two new public roads from Eglinton and Leslie would be created that would go into the site. The proposed complex would be just to the south of Tridel’s Augerge on the Park development, a three-tower complex currently under construction that ranges from 45 and 29 storeys. It would also be north of the upcoming Sunnybrook Park LRT station, though the completion of the LRT was recently delayed until 2023.

City planning staff told Post City in a statement that they will be focused on the configuration of the new public streets, the orientation and size of the parkland, as well as the height and density of the site, the latter of which is projected to be nearly five times the area of the lot.

“(These considerations are to) ensure a pedestrian sense of scale is maintained,” city planner Michelle Charkow said.

Residents, meanwhile, are somewhat concerned about the density but admit that it could be worse.

“We think the density is a bit much and the site planning will need some tweaking, but it isn’t too bad,” Don Mills Residents Inc. VP Brian Story said in a statement.

“A recurring theme with all recent developments is that the local community loses services (car dealership & service centre in this case) in favour of residences. A balance is needed in this regard.”