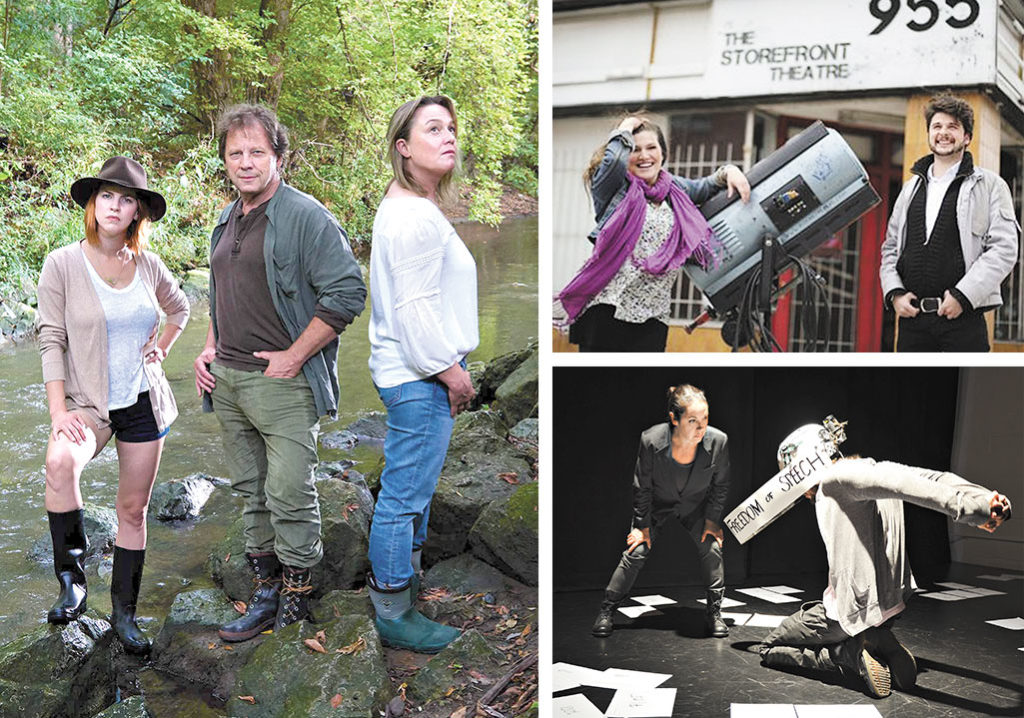 Toronto’s theatre scene, although already robust, is currently being injected with some new lifeblood, albeit on a smaller scale. Over the past several years, a spate of small, independent theaters has been cropping up in abandoned storefronts or on nondescript corners all over the city — and their presence has been embraced by the neighbourhoods they’re moving into, creating an even stronger sense of community and bolstering an appreciation for the arts. Here are five small storefront theatres in Toronto making big waves in the city.

The intimate theatre sits just 80 patrons per night, which provides an up-close experience ripe for drawing the viewer in. The intimate yet exciting off-off-Broadway experience is in large part what inspires Coal Mine and their robust productions that don’t shy away from depicting the darker side of life. Coal Mine Theatre has had to move around a bit this season. The first show, The River, arrived to rave reviews at the end of 2015.

The remainder of this season as well as the 2016 season will unfold at 1454 Danforth Ave., beginning with Shakespeare’s The Winter’s Tale, directed by Graham Abbey. The show runs Jan. 28 to Feb. 21.

The new show stars a who’s who of the Toronto theatre scene such as  Tom McCamus, Michelle Giroux, Lucy Peacock and Brent Carver (www.coalminetheatre.com).

Storefront Theatre
The aptly named the Storefront Theatre, founded by Benjamin Blais and Staceylee Turner, opened on Dec. 21, 2013. Located at 955 Bloor St. W., just west of Ossington subway station, the independent theatre space has already become embedded in the community. What was once a neighbourhood drugstore turned empty storefront is now a thriving part of the city’s theatre scene.

In addition to events and productions, on the first Monday of every month, aspiring playwrights and actors can participate in the Storefront’s Sing for Your Supper program, wherein they meet, share ideas and workshop new scripts before an audience.

Red Sandcastle
Leslieville is home to Red Sandcastle Theatre, a 50 to 70 seat theatre with a philosophy of “Anything is possible,” something that is reflected in the whimsical nature of the theatre’s productions. Founded in 2011 by artistic director Rosemary Doyle, Red Sandcastle kicked off its theatrical programming with Susanna Hamnet’s Nearly Lear, a kid-friendly version of King Lear, which was followed by 42 productions in the first year. Stage productions aren’t the only thing going on at Red Sandcastle.

The space welcomes everything from art shows and open mic nights, to book launches and kids’ camps, proving it’s a venue committed to promoting creativity across all avenues and also to fostering a sense of community.

Next up at Red Sandcastle will be the children’s theatre production Jack and the Beanstalk, Jan. 7 and 8.

Unit 102 Theatre
For Unit 102 Theater Company, the idea is small stops at square footage. This is a theatre company that thinks big, with take-no-prisoners productions to match, productions that suck you in, keep you reeling and send you on your way a happy ticket holder.

Located in the Theatre Machine, tucked away in an industrial area at Queen and Dufferin, Unit 102 was formed in 2009 by Luis Fernandes, Jesse Hughes, David Lafontaine, Scott Walker and Jenny Westoby.

The theatre is known for a mix of contemporary works with some Shakespeare thrown in.

Their next production, Adam Rapp’s Red Light Winter, opens on Jan. 8, and it runs until Jan. 23.

Aluna Theatre
Aluna Theatre, a Canadian/Columbian theatre company located on Wiltshire Ave., was founded in 2001 as a way to better represent cultural diversity on the Canadian stage. The focus here is on Latin Canadian and women artists, with a priority to allow each character who graces the stage to exist outside the confines of labels, boxes or other preconceived notions of who that person should be. This ethos has moved Aluna Theatre to create some truly fresh and compelling stories that coax audiences to shift their perspectives and really think about what cultural diversity means. Aluna will be presenting two productions, The Refuge of Freidel and their acclaimed What I learned from a decade of fear, as part of the Progress Festival taking place at The Theatre Centre. They run January 20-23 and January 21-24 respectively.

Some of the most promising and exciting theatre in the city is happening at the Theatre Centre, a new arts incubator at 1115 Queen St. W. For instance, Butcher, a recent production by Why Not Theatre that ran into November, is being hailed as one of the best plays of the year.