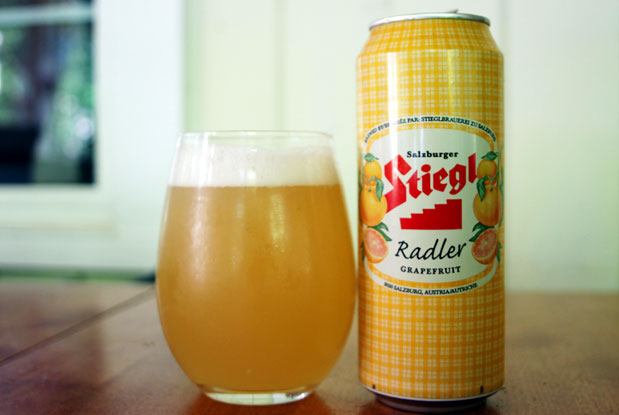 “Beer with fruit; German tradition; premixed beer cocktail; refreshing; juice beer; official drink of cyclists.” Such was the seesaw stream of thoughts that tormented me this week while preparing to write about the Stiegl Grapefruit Radler. This grapefruit version of the radler — a premixed beer cocktail — is currently available at the LCBO.

The made-for-TV version of the cocktail’s origin is that Franz Xaver Kugler, a Bavarian barkeep, found himself the victim of his own success when 13,000 cyclists showed up at his country pub outside of Munich one June Saturday in 1922. To deal with the overwhelming crowd, he cut his limited beer supply with lemon soda and claimed that it was a special cocktail, called Radlermass, that he had invented for the day (“radler” is German for cyclist, and “mass” is German for a litre of beer.) There are references to the cocktail, though, that date back at least 10 years before this.

Stiegl’s version combines Stiegl Goldbräu lager with natural grapefruit juice in a half-and-half split. This drink has a light, citrus-zest aroma, with a palate-refreshing carbonation, and the flavour is a well-balanced combination of sour-sweet grapefruit with mildly bitter lager. The pairing tastes natural, without any of the synthetic off-notes that tend to plague the current fad of citrus beers.

When summer eventually arrives, the Stiegl Radler will be one of the ideal antidotes for those 30-plus, humid, endless afternoons. It’s also only 2.5 per cent alcohol, so while I won’t recommend it as a (safe) pre-cycling beverage, it will work well as a post-excursion refreshment.

Cans are available at the LCBO, and many bars will have Stiegl Radler on tap, but I don’t know of any that are taking the traditional German approach to half-strength beer, which means serving it in a one-litre stein.

In addition to covering beer, new restaurants and food trucks for Post City, David Ort writes about food and drink for several Toronto publications including Spotlight Toronto and his own site, Food With Legs. For more of his thoughts on food, beer and life in general, follow him on Twitter.