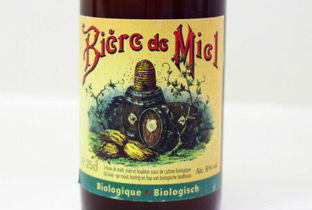 The LCBO’s featured brewery this season is Brasserie Dupont, and all four of the special release beers are worth a taste. The Moinette Brune is a nice Belgian brown ale, and the Monk’s Stout is interesting, but it’s the Cervesia — and especially the organic Bière de Miel — that stand out.

Honey beer has no particular historical connection to spring, but the floral lightness of the style and the fact that it’s based on a product that is so intrinsically tied to warm weather always makes me think of the season.

The Bière de Miel won prizes and international recognition for the brewery, but it was discontinued when the Dupont family took control of the business in the early part of the 20th century. It was revived in the late ’90s with a close approximation to the original recipe. While craft beer in North America usually means new breweries experimenting with an eclectic mix of styles, Europe more often sees cases like this, where successful and established brewers pull from a deep back-catalogue.

Naturally, the beer pours a light amber gold that reminds me of fairly light honey. On the nose I get plenty of the aromas of flower-based honey, backed by a slight funkiness and bitter orange peel. The flavor comes through surprisingly dry with a subtle reference to bubblegum balanced by a touch of hop bitterness. A final fermentation in the bottle turns any residual sweetness into alcohol (eight per cent by volume) and gives the beer a refreshing mousse — and keeps it well clear of cloying.

Spring also brings the return of warm afternoons and simple, fresh fruit desserts. The Bière de Miel will match excellently with both.

At under three bucks for a small bottle, this is a great example of one of beer’s strongest suits: the opportunity to try a well-crafted and world-class product without paying the price that goes with those adjectives when they describe wine.

In addition to covering beer, new restaurants and food trucks for Post City, David Ort writes about food and drink for several Toronto publications including Spotlight Toronto and his own site, Food With Legs. For more of his thoughts on food, beer and life in general, follow him on Twitter.