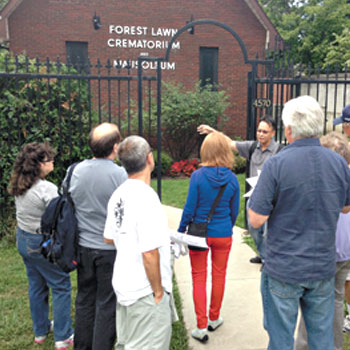 “Watch out for the brambles,” warns Raymond Jean — one of the few cautions he offers a group of residents, a city councillor and the councillor’s staff as he leads them fearlessly on a three-hour tour  beneath Yonge and 401. And, yes, it really is much wilder down there than you might imagine.

The group has come in search of a pedestrian and bicycle route and to explore Raymond’s outside-the-box solution to the traffic mess above.

“I call it a double crossover,” he explains. “It will convert the Yonge 401 interchange so that all the traffic becomes free flowing.”

Along the stretch of Yonge between Sheppard and the 401, which becomes nearly impassable at rush hour, the single greatest source of congestion is the lineup of cars trying to turn eastbound onto the 401 from southbound Yonge.

His idea is to have the southbound lanes of Yonge go underneath the northbound lanes for a short distance, providing an entry ramp to the highway that doesn’t hold up traffic in either direction.

It took several explanations before I grasped the concept. But after that, it seemed simple.

Problem solving is Raymond’s hobby, and he stares this one in the eye each morning while walking from his West Lansing home to the subway station, en route to his job as a software engineer.

To be seriously considered, the idea needs a green light from city and provincial traffic engineers. That could come as early as this fall.

If there’s any reluctance, I suspect the naysayers will be invited on a hike they’ll remember for a long time.