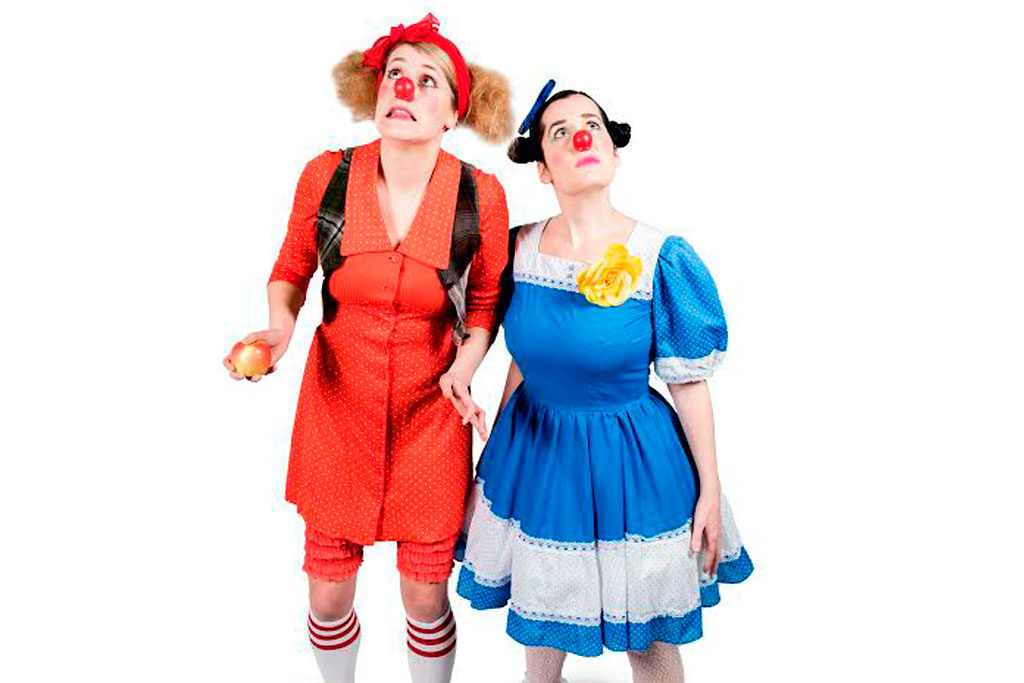 Toronto's clown duo, Morro & Jasp, are back in action with a new show, Stupefaction, kicking off today at Streetcar Crowsnest, and they're calling this one their largest and most complex show to date.

"Stupefaction is our biggest show yet, meaning we have more production elements and a cast beyond the duo. We are playing with how the other characters, including the space, have an impact on or reflect our relationship as Morro and Jasp," says Heather Marie Annis who plays Morro.

Annis and her clowning partner Amy Lee, who plays Jasp, met in 2002 while studying theatre at York University.

"The thing that made us really become a team was when we were partners for a scene study of Judith Thompson's Lion in the Street. We loved each other's intense commitment and love of playing, even in a really dramatic scene," says Lee.

At York the pair also met Byron Laviolette, who is their director. Laviolette had seen them perform a duo piece at a student festival and approached them about clowning. He had written a short for two boys named Morris and Jasper, but changed it when he saw Annis and Lee's dynamic.

In their current show, kicking off tonight and running until June 24, the clown sisters are looking for meaning through a series of bizarre encounters with strangers that they interpret as signs from the divine. The pair try to create rules of a new belief system, but run into conflict when deciding who or what they are worshipping.

"We are looking at belief systems. We, humanity, tell stories to try and understand why we are here, what is the meaning of life, and what our purpose is. Some of these are religious, some secular, some scientific, some economic. These stories then have an impact on our societies and on us as individuals," says Annis.

Stupefaction is their most existential and philosophical show to date, but of course, it's still funny.

"There are some big questions that we are grappling with and such questions don't really have definitive answers, even though sometimes society approaches them as they do. At the end of the day, the only thing we really know is that we have each other. So let's get together, share, talk and have a good laugh while we're at it," says Lee.

On stage, Annis and Lee will be joined by three cast members, Sefton Jackson, Elliott Loran and Anand Rajaram.

"All three of them are super talented, incredible collaborators and fearless performers. Throughout the process, they have helped us hone the script and story, as well as taken ideas for very archetypal roles and made them into interesting and unique characters," says Lee.

The clown duo is also up to some exciting stuff off-stage. They are releasing their video game, Morro and Jasp: Unscripted, later this week which will be available on the App store. Then in the fall they will be playing Of Mice and Morro and Jasp in high schools. They say they have some other shows in the works too, but are keeping it hush hush for now.

Morro and Jasp in Stupefaction is playing at Streetcar Crowsnest at 345 Carlaw Ave. from June 14 to 24.