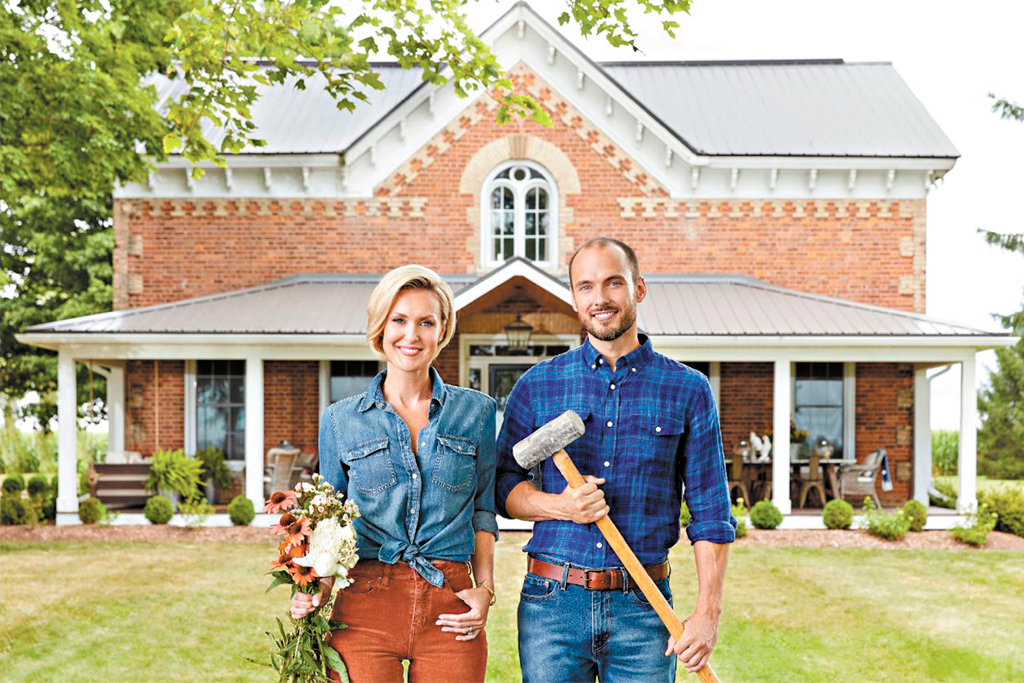 Everyone loves a good home renovation show, but this time HGTV Canada is going beyond the regular storyline viewers are accustomed to with its new series Farmhouse Facelift. The show follows artisan contractor Bill Pearson and his sister and interior designer Carolyn Wilbrink as they find historic farmhouses across Ontario and breathe new life into the vintage spaces.

Both Pearson and Wilbrink grew up on their family farm in Waterdown, Ont., where they learned to restore and reclaim the charm of these types of heritage properties. The series kicks off on March 3 at 10 p.m. on HGTV Canada, and the siblings will pair together Wilbrink’s renovation and design plans with Pearson’s custom artisanship to give these local farmhouses a facelift.

We caught up with Wilbrink to chat about the other duo she’s a part of — CW Design and Co. with her husband Craig. When the couple embarked on their own massive farmhouse renovation project, it sparked the idea to start a company that would highlight Craig’s millwork, metal fabrication, installation and business knowledge along with Carolyn’s passion for design and renovation projects. Here, Carolyn dishes on their love story.

We met when I was 16 years old. Craig worked at a car stereo shop and I tagged along with a friend of mine to visit the shop. When I got my driver’s licence, I went back to purchase a car stereo for my first car and we totally hit it off. The only thing was he had a girlfriend and I had a boyfriend. We stayed friends and I would often pop by to see him at work. Then I ran into him at a bar in Burlington one night and we danced for hours. That was definitely the night that Craig became interested. I even kept the dress I wore that night as a memory.

We started hanging out just after I turned 19, but our first official date was on Nov. 1, 2000. Craig took me to a restaurant in Mississauga called Outrigger. I have no idea why he chose that place but we can honestly remember every detail about what I was wearing and even what he ate. During dinner we talked a lot and Craig made me laugh like always, but then there was a very special connection that happened. We locked eyes and then I told Craig I was starting to fall for him. I had never met anyone who made me feel so comfortable just being me and I just knew in that moment that I had to let him know. Then he told me that he was just about to tell me the same thing.

Craig bought me a dirt bike for my college graduation gift so that I could come along with him and his buddies when they rode. He would always ride it up this steep hill for me to get into the pits and then one day he told me I had to do it myself. He told me whatever I did, not to lean back. So I was just over half way up the hill when my front tire caught a root and I leaned back! I ended up head over heels with my bike all the way to the bottom. I was clearly shaken and an absolute muddy mess after that with a massive bruise on my right hip but Craig would not let me give up. He told me to walk up the hill (while he rode the bike back up for me) and get back on and ride around until I felt better. That was the first time I realized that he wouldn’t let me fail and that he always pushed me to do better because he truly believed I could. Craig’s most memorable moment would be our first New Year’s Eve together. His friend was house-sitting a huge home with a full dance floor and karaoke bar and a massive hot tub. I grabbed the mic and sang “Johnny Angel” to Craig and everyone started clapping and whistling. He was obviously pretty taken aback but it was when I was the first one to jump out of the hot tub and do snow angels in my bikini that Craig said he knew that was it for him.

Craig proposed to me the night before my 20th birthday. He had surprised me with a weekend away to his family’s cottage in Long Point. While Craig was making me dinner, he was super nervous and kept dropping the dishes and fumbling with the cutlery and I couldn’t quite figure out what was going on with him. He mentioned during dinner that he wanted to go for a walk on the beach and watch the sunset which I thought was super sweet. We were about 20 minutes into our stroll with our puppy and then Craig turned to me and got down on one knee and popped the question. While he was telling me how he wanted to spend the rest of his life with me, our puppy Brodie began frantically digging a huge hole kicking up sand all over the both of us. It was actually quite comical. We both started laughing and then I said yes!

We were married in Waterdown on June 28, 2003 at the same church as my parents. We had a beautiful day and spent our reception at Rattle Snake Golf & Country Club in Halton Hills. It was probably the most memorable of all of our friends’ weddings. One of our guests had a little too much to drink and grabbed a tiki torch and streaked across the golf course. Thank God it was at the end of the night because I almost died. We couldn’t afford a honeymoon as we had just bought our first home (a townhouse in Stoney Creek) so instead we spent a few days at the cottage. We finally did get our honeymoon seven years later when I gave Craig a trip to Negril, Jamaica for his 30th birthday.

We have four incredible kids — Jackson, 16, Brooklyn, 14, Case, 8, and Hunter, 7. They definitely keep us young and they still think we’re pretty cool. We love having family move nights, kitchen dance parties, making up fun games and helping them make movies.

We do the best we can to carve out our own time, especially with being so busy with four kids. We’re a team here at home and at work so we definitely rely on one another, which sometimes can become difficult especially when we’re exhausted. But we work every day at putting our marriage first. Craig is my rock and I couldn’t imagine doing this parenting gig and our crazy chaotic life with anyone else. With the pandemic though, it has been hard as we really do live for our date nights so we’ve had to get creative.

It’s no surprise that we live in a 165-year-old farmhouse in Lynden. The crazy part is that when we bought it, we had absolutely no idea that it had actually been built by my great, great, great grandfather. We found out about a month after we moved in when we found an old article about the home, so I truly feel like it was meant to be and that makes this farmhouse even more special.

Love, empathy, honesty, kindness and forgiveness. No matter what kind of relationship you’re in, you need those five ingredients. We’ve definitely had our ups and downs and we’re far from perfect, but we’re in it for the long haul. He’s my best friend before anything else. We also love trying new and exciting things and pushing each other to our limits. It’s probably one of the biggest reasons that we are where we are today.

Living it up in San Diego on the beach, that’s our dream! But if I could find a farmhouse on the beach, it would be a million times better.