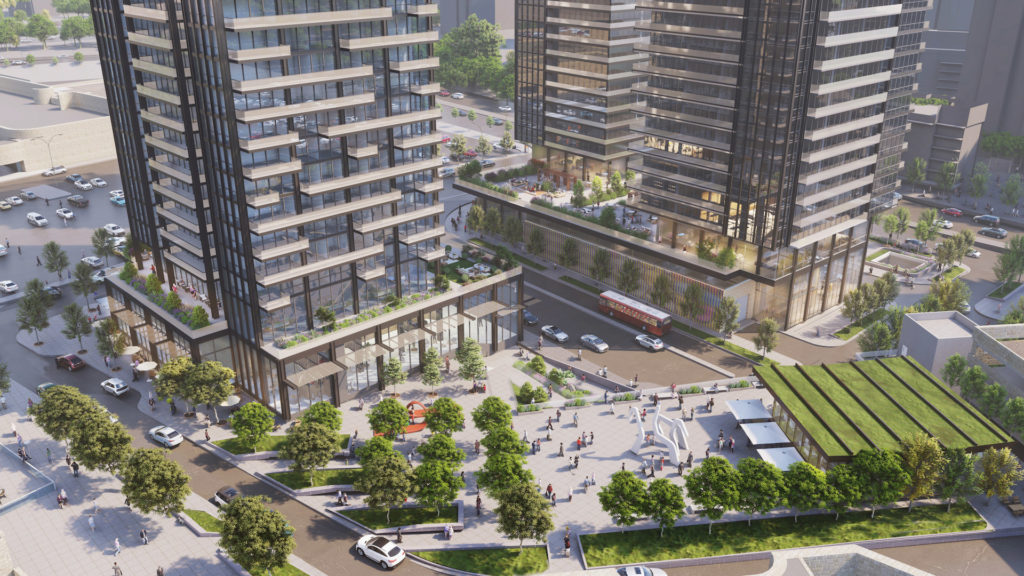 A rezoning application has been submitted to the city that seeks to kickstart what is a planned four-phase process of transforming the site of Fairview Mall in North York.

The mall is located at 1800 Sheppard Ave. E.  According to the rezoning application submitted to the city of Toronto by mall owners Cadillac Fairview on April 20, the shopping centre is 77,622 square metres and sits on an 18.8-hectare site that also contains surface parking areas, parking structures, an internal private road network as well as TTC Line 4 Don Mills Subway Station and a bus terminal.

The application, for the first phase of the development, seeks to replace existing parking lots, driveways, and a portion of a five-storey parking structure on the mall site with three high-rise buildings of 58, 48, and 38 storeys ranging from 133 meters to 197.6 metres in height.

The proposed condo and rental development, located at the south side of the mall with frontage on Sheppard Avenue East and adjacent to Don Mills Subway Station, is known as Phase 1 of a four-phase proposed master plan concept of the site that seeks to replace the surface parking areas around the perimeter of the mall with a new network of streets as well as 4,700 new residential units. The proposed master plan concept also envisages the creation of three new public parks totaling 7,840 square metres of parkland  as well as 10,700 square metres of private open space.

According to documents submitted with the application, the proposed master plan concept “will activate the edges of what is currently an automobile-oriented site, further leverage the higher-order public transit connectivity offered by the Line 4 Don Mills subway station and contribute to the achievement of a complete community in the immediate area.”

According to the press release, the three buildings in phase one will be comprised of two condominium buildings and one residential rental building. A new pedestrian plaza will be situated between the TTC station and the residential buildings.

The North York mall may have been the last holdout in the great condo takeover as most other spaces already have residential construction ongoing or are in one stage of the development process or another. Tens of thousands of residents will soon reside on former parking lots at every mall, including Yorkdale, Bayview Village, Centerpoint, Galleria, Dufferin, Sherway Gardens, and others.

The application for phase one of the Fairview Mall condo development has been received by the city and is currently being circulated to various city divisions for feedback.