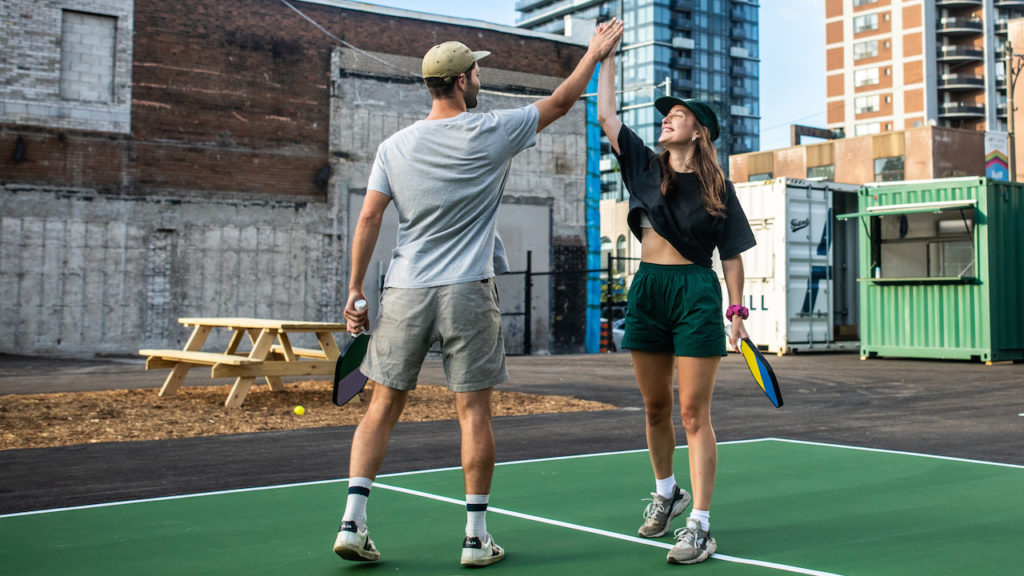 Trailblazing entrepreneurs Matt Rubinoff (Stackt Market) and Drummond Munro (Superette) have taken over the space at 2400 Yonge St. to create the city’s first pickleball club with a focus on inclusivity and good times.

Murno says, the inspiration for Fairgrounds was his own upbringing, which included plenty of time spent in posh and exclusive private clubs. Fairgrounds aims to bridge the gap between exclusive sports clubs and poorly maintained public courts by offering a space where anyone can play pickleball on freshly painted and well-maintained courts. There are no membership dues, just pay-as-you-play drop-in fees and no dress codes.

There will also be plenty of opportunities for social events, as well as on-site food, beverage and retail.

“We didn’t understand why there was nothing between inaccessible private clubs and public amenities,” Munro says. “Pickleball has become this great equalizer of a sport because it’s a really flat learning curve and it’s all ages, all demographics, and we decided to launch a new type of club.”

Pickleball is a rapidly growing sport across the globe – something that Munro attributes to the sport’s inclusivity.

“Pickleball is this great equalizer sport where you can pick it up really quickly. The learning curve is relatively flat and you can have fun almost instantly,” Munro says. “It’s not like tennis where if one person doesn’t know how to play, you’re not going to get a rally. It’s just this really fun, hyper-inclusive and not overly serious sport that everyone can sort of grab onto.”

Tuesdays at Fairgrounds is free for anyone that wants to try pickleball (the club will even match you with a few partners if you don’t have someone to play with). Every other day of the week, there is a $10 drop-in fee per person per hour, and there is four people to a court.

The space will also include a place to hang out, purchase food and beverages, and buy a few branded goods (some of those options can be seen on the Fairgrounds Instagram page). Weekly social events and tournaments are part of the plan too. While the current focus is on pickleball, Munro and Rubinoff plan to expand the concept to other racquet sports.

2400 Yonge St. has been a potential construction site for several years without any development headway. Caught between development projects, this particular stretch of Young and Eglinton is a stark contrast to the newly painted orange, green, red, and blue hues from the Fairgrounds courts (thanks to the team Design of Brand, the company behind brands such as Superette, Greenhouse Juice and Othership).

Fairgrounds will occupy 2400 Yonge until the end of the year with the possibility of extending into next year, but the current space is likely temporary. Munro and Rubinoff are scouting out other sites within the city for a more permanent location.

Fairgrounds officially opens on Aug. 22 and will stay open until midnight daily. You can check out the space and book your pickleball experience via the Fairgrounds website launching on the same day.