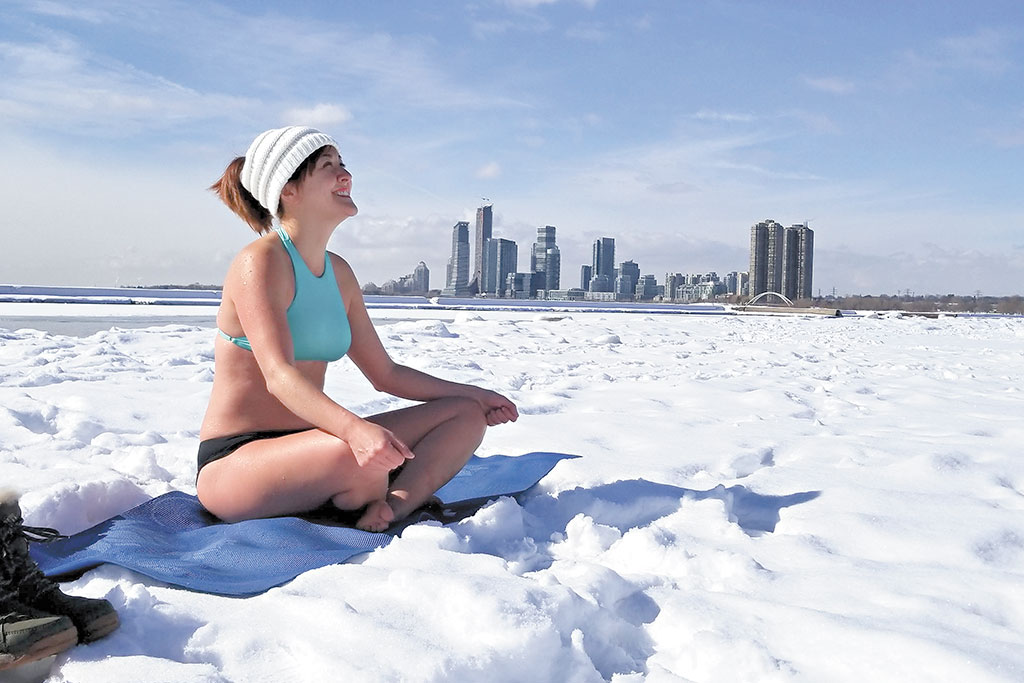 There’s a new trend in Toronto for braving the cold winter months — getting colder.

From jumping into an ice bath to standing in a chamber where the temperature sits at -160 degrees Celsius, extreme cold therapies are gaining traction across the city. Sounds a bit crazy, but evidently there are many mental and physical health benefits that can result from it.

Mayte Morelos, a midtown real estate agent, says she’s never been a fan of the cold. Having been born in Mexico, the hot summer sun was more her thing. Yet a few years ago, she found herself in an ice bath learning the Wim Hof Method.

“It’s a breathing technique that you do prior to doing cold exposure. Both the breathing and the cold exposure are designed to take your body into really stressful situations,” she says.

She breaks the Wim Hof Method down into three pillars — the breath work, the cold exposure and the mindset. The name of the method comes from an extreme endurance athlete who discovered the technique.

“[Wim Hof is] from the Netherlands, and he would just jump in Amsterdam canals in the middle of the winter. Of course, he started getting a lot of media attention, and they started daring him,” says Morelos.

Those dares involved climbing Mount Kilimanjaro in a pair of shorts, swimming under ice for 66 metres and even running a half marathon in the Arctic Circle while barefoot. He did them all.

Of course this caught the attention of scientists, and Hof agreed to participate in some studies. The Radboud University Medical Center in the Netherlands determined that Hof had gained control of his autonomic nervous system (a control system that acts largely unconsciously and regulates bodily functions), making his immune system smarter. That’s when he started training others.

“I have trained with him personally, myself, in his home in the Netherlands and in Poland,” says Morelos who is now a Wim Hof instructor who hosts workshops twice monthly in Toronto. The next one is March 21 and details can be found at www.wimhofmethod.com.

Morelos says to come prepared for an intense physical experience.

“In my workshops, we do ice baths. So when people go into an ice bath, I put them in there and then I’m coaching their breath,” says Morelos. “Their breath is very different from the breathing technique that we do prior to it. It’s a much slower, calmer breath.”

According to Morelos, the method lowers inflammation levels, increases energy, produces dopamine in a natural way and trains the circulatory system.

Of course jumping into an ice bath isn’t safe for just anyone. Morelos says people with epilepsy or cardiovascular issues, pregnant women and anyone battling a cold should not try the cold exposure.

The risks and benefits are similar to cryotherapy. The method is different but components are the same, such as what happens inside your body during the cold exposure.

“When you go into the cryotherapy chamber, the surface of the skin is exposed to the lower temperature for three minutes and it stimulates the body’s natural healing abilities,” says Nicole Bassels, a co-owner of Cryomend at Bayview Avenue and Manor Road. “Your blood vessels constrict, and then the blood rushes to your core to protect you from going into hypothermia. When you exit the chamber, your blood vessels dilate and reoxygenated blood flows through your body releasing endorphins.”

Bassels says she has athletes who come in for cryotherapy once a week as a recovery tool after training, to tackle joint and muscle pain. Other clients who use it as a mood enhancer for general well-being and to help with depression and anxiety come in twice a week.

To get started, she tells her clients to come in every day for 10 days to reduce the pain and inflammation, then move to maintenance.

Bassels herself goes into the chamber once a week and says she would like to try the Wim Hof Method, but doesn’t like ice baths.

“I find cryotherapy is much more tolerable because there is no moisture attached. So when I’m taking a cold shower or I’m taking an ice bath, I find it difficult.”

Another easy entry point for those looking to try cold exposure is hydrotherapy — the series of hot, cold and relaxing pools found at many spas such as Body Blitz, the Scandinave Spa and the new Nordik Spa set to open in Whitby this fall. The benefits are similar to other cold therapies, as hydrotherapy is said to energize the body, improve blood circulation, release endorphins and help detoxification.

“Tradition suggests that the hot stations be followed by immersing oneself in cold water,” says Mylisa Henderson of the Scandinave Spa in Blue Mountain. “This step causes the skin’s pores to close, thus shutting in the heat.”

A typical hydrotherapy circuit will include hot, cold and relaxing pools along with a steam room, sauna and resting area.

“These refreshing stations promote a shift in blood pressure, encouraging the body to flush toxins, the muscles to release tensions, allowing you to fully engage in the benefits of the circuit,” says Henderson.

No matter the method, extreme cold therapies are quite the experience. When Morelos tried her first ice bath, she says she felt a level of presence within her body that she had never experienced.

“As soon as I got out of the ice bath, there was just a surge of incredible energy and a lightness that I had never felt before. So that definitely got me interested.”