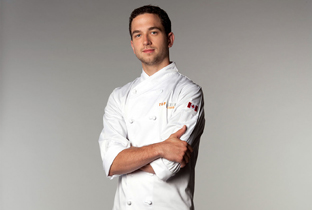 Back in February, when chef Carl Heinrich announced he was leaving Marben to start his own project, the obvious speculation was that he had probably done really well on Top Chef Canada. It turns out he did: yesterday’s season finale revealed that he is officially Canada’s top chef and claimant to the $100,000 prize.

The next question on everyone’s minds is, of course, when he and his business partner Ryan Donovan are going to open their upcoming Toronto restaurant. In an interview with The Grid, Heinrich indicated that the new restaurant at Yonge and Richmond will be called Richmond Station. It’ll be a 100-seat restaurant opening in mid-August or so, and will focus on ingredient-driven, farm-to-table cuisine.

West coasters, meanwhile, are surely gloating (Heinrich was born in B.C., and last year’s winner, Dale MacKay, is based in Vancouver). Still, we think Heinrich said it best: “Toronto is the best culinary city in Canada right now.” Amen to that.