Everyone loves Hilary - Streets Of Toronto
Skip to content 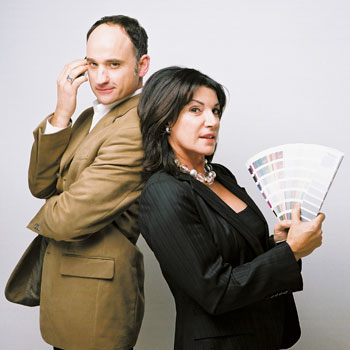 To stay or to go? It’s a theme that has resurfaced a number of times during interior designer and TV personality Hilary Farr’s career.

Back in 1994, when the now star of the W network’s hit TV show Love It or List It was living in Los Angeles working as a stager, Farr decided “to go” and moved to Toronto.

“We had riots, earthquakes and it was getting smoggier,” says Farr. “I had decided I had enough.”

Then in 2007, when auditions were being held for Love It or List It, Farr, after a push from a friend, decided “to go” and audition.

She promptly landed the designer gig on the show.

Still going strong after five seasons, her co-hosting duties have made her a household name for fans of the household renovation series, on which, coincidentally, Farr is now advocating homeowners to stay in their homes and “love it.” Her co-host, David Visentin, a realtor, encourages clients to go and “list it.”

“I think it resonates because it’s everyone’s dilemma — ‘What do we do?’ ” says Farr, referring to the huge success of the design show. “[People think], ‘I know that this house should or could work, but on the other hand, is it worth it to put money into it?’ I think that [reasoning] comes along with the insane property values.

“There’s always this fear because people are looking for the potential value of their home and terrified of making the wrong move.”

That fear probably explains why most of the homeowners featured on the series don’t hesitate to vehemently air their frustrations to Farr upon inspecting her renovations.

“It never ceases to amaze me that homeowners can get that pissed off,” she says, though she understands their misgivings. “We’re in and out in three weeks. It’s not a long-term relationship … I do empathize. It’s very different than a real renovation, and usually you would hold their hand every step of the way. It’s a shock for them the next time they see their home. It’s ripped apart, and I’m usually giving them bad news. They don’t have a lot of time to prepare and they’re on-camera. Mostly, I don’t take it personally.”

On her chemistry with co-host David Visentin: “What you see is what you get. We adore each other.”

Her English roots (she grew up in London, England) might explain her keep-calm-and-carry-on demeanour, but Farr also has plenty of what she calls “practical training” to draw upon to help make those insightful decisions for her clients.

Initially interested in pursuing theatre, her first dabbling with interior design came from helping her mother hunt down unexpected pieces of art and other accessories to decorate her childhood home.

“My mother was mad for interior design,” says Farr. “I’d come home and find that she had rearranged the living room again.”

Finding that interior design was actually a good segue from theatre, Farr pursued the craft.

“It started in L.A. I [decorated] a house for myself. I was also working with people who were staging for movies and TV, and that got me interested in doing that, and I worked with them on quite a few projects.”

One house led to another house and more and more clients, and suddenly Farr had herself a successful career as an interior designer.

When she moved to Toronto in 1994, she became the first local designer to stage homes.

“Staging is to create a sense of a home,” explains Farr. “It gives the buyers a sense of what could be, giving them an emotional reaction  like, ‘This could be my home.’ ”

Staging in Toronto just made sense to Farr.

“The first thing I noticed here was that the houses on the market, compared to the ones in L.A., were extraordinarily interesting with lots of value. So I started buying houses, fixing them, renovating them, and that led to a huge business in staging.”

Her business was so lucrative that, when her friend suggested she audition for Love It or List It, she demurred.

“Well, first I thought [auditioning] was the dumbest idea ever, but I also had a lot of projects on the go. [My friend] pushed for it, and I ended up getting [the job].”

Farr, together with Visentin, turned out to be a casting coup for the show. Their chemistry undoubtedly is what helps make the Gemini-nominated Love It or List It one of the highest-rated reality shows for HGTV.

“There’s a genuine deep affection between us and a really good, genuine, healthy competition,” Farr says of her relationship with Visentin. “What you see is what you get. We do bicker. We are exact opposites. We adore each other. We make each other laugh a lot.”

When asked how many “love its” there are to “list its,” Farr isn’t sure of an exact score, but does assert, “I’m definitely in the lead.”

However, she does admit to being consistently surprised when it comes to the homeowners’ final decision whether to love it or list it.

“You really don’t know. We don’t know. We know when you see it. Sometimes I’m surprised when they love it, and conversely, when I think I did a spectacular job, and they still decide to list it.”

Perhaps what’s not surprising is Farr’s favourite part of the show: the much-anticipated reveal of her strenuous renovation.

“Nothing beats that. Whether with the show or my clients, it’s just wonderful to see that.”

And so where does Farr shop when it comes to creating those spectacular transformations?

Elte (80 Ronald Ave.) is “always a go-to place,” says Farr, who also enjoys working with local artists and “rooting around” the stores on Yonge Street, like L’Atelier (1224 Yonge St.).

Another favourite store of the Yonge and St. Clair resident is Boo Boo and Lefty (1198 Yonge St.), which, Farr says, carries “simply lovely and livable pieces that work perfectly with my design aesthetic.”

And if that style solution from Farr doesn’t cut it for you, don’t fret: she has a product line launching in October and a book is in the works.