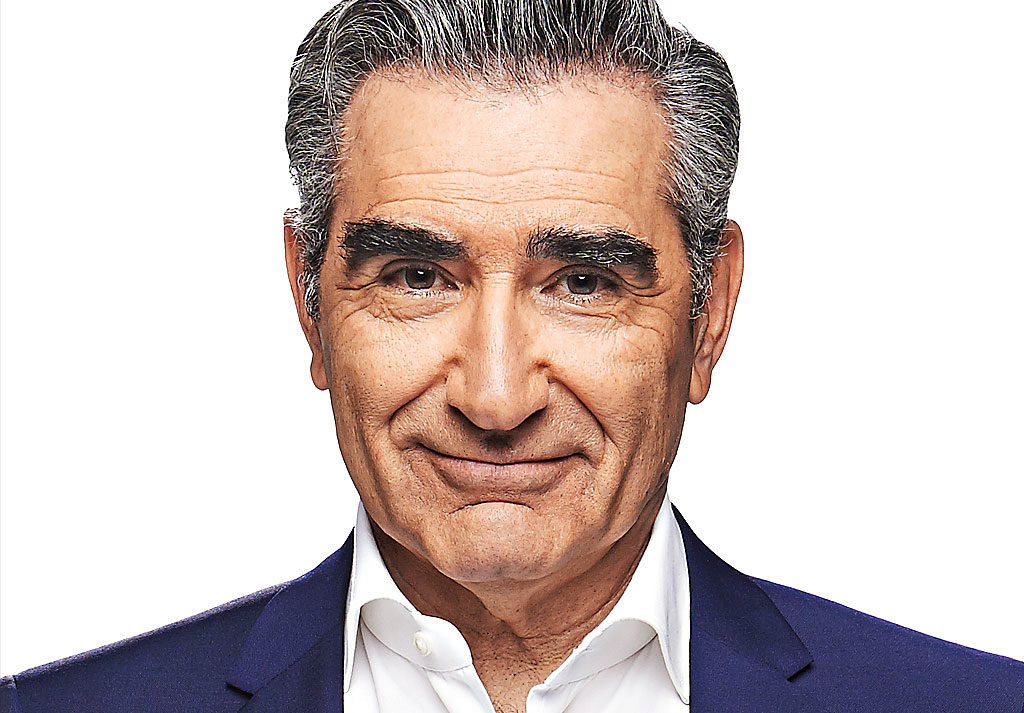 The final episode of Schitt’s Creek airs on April 7, so we decided to look back at this interview with co-creators and co-stars Eugene and Dan Levy from 2015 when the show was just getting off the ground.

Meeting Eugene Levy for the first time, the fact that you’re in the presence of one of the most brilliant comedic minds in entertainment history — to say nothing of Canadian entertainment, for that matter — doesn’t initially register. There’s the sudden welling up of hero-worship, then shortly thereafter, the realization that this is the same guy who redefined sketch comedy as a member of Second City and one of the stars of SCTV followed by his work in the acclaimed mockumentaries of filmmaker Christopher Guest.

This was the scene at CBC headquarters, where I and a few other journalists had gathered to meet not just Levy, but his son Dan, Annie Murphy and another Toronto native, Catherine O’Hara — SCTV alum and fellow comic genius seen just as frequently in Guest’s films. We were all there to discuss the launch of the CBC’s latest prime-time offering: Schitt’s Creek, a laugh-out-loud study of what happens when a super-rich family settles into, well, a slightly more humble lifestyle.

The show, which premiered in January, has already garnered significant attention, pulling in more than a million viewers for each of the first two episodes. The gangbusters start prompted CBC to green light a second season in quick fashion.

“I had been playing with this idea of what would happen to a wealthy family that lost its money,” Dan says. “It stemmed from just being so aware of how rich people live their lives — reality TV, it’s just in your face whether you want it to or not. I thought it could be a funny premise for a show if it was approached in a very real way…. That’s when I went to my dad, because he’s the best at bringing the reality of a humorous situation out, and we started to explore what that show could be.”

The elder Levy describes the comedic formula as using the most basic, humble elements of dialogue possible, an explanation that resonates with the character-driven portrayals he’s given.

“We knew we wanted it to be a character-driven show, and it was imperative that the audience have an emotional involvement with the characters,” Eugene explains. “We like to play with reality and grounded situations, not so much heightened, sitcom filler. That’s its own art form and that’s great, but it’s not necessarily my cup of tea.”

“We lucked out with the entire cast; everybody’s so brilliant at doing this.”

If Schitt’s Creek is making waves, it’s the result of that finely tuned, well-balanced blend of talent and madness.

When the Levys dreamt up the character of Moira, the family matriarch, their casting choice was easy.

“In the case of a character like Moira, Catherine [O’Hara] would have been the first choice and was the first choice, because she’s going to bring stuff to the mix that you just can’t get from somebody coming in and trying to give you what’s on the page, so to speak,” says Eugene.

It’s a pedigree of talent, he says, that calls back to what made the films of Christopher Guest — films such as Best in Show and others that won acclaim from fans and critics alike as a result of their remarkable use of improvisation.

They’re not just hilarious, they have a sophisticated edge but one nonetheless grounded in very real-feeling, dynamic relationships between their characters. The script is secondary; the way the actors play off of each other is what makes it brilliant.

“We were lucky to have a cast of characters in [Christopher Guest’s] movies that could pull that off,” Eugene says, shining the spotlight on his castmates.

“Schitt’s Creek is kind of the same thing. Generally we lucked out with the entire cast; everybody’s so brilliant at doing this.”

Eugene portrays Johnny Rose, the patriarch of the Rose family, a wealthy clan that loses all its largesse and, in a bid to rebuild their lives, relocates to their only remaining asset: a town they once purchased as a gag, Schitt’s Creek. But though the theme rings with a certain TV familiarity, it’s the subtleties that make Schitt’s Creek stand out. The actual situation in this particular sitcom is secondary to the work of the actors.

Among the other, well, human characters that might be familiar to audiences — Chris Elliot (known for his roles in There’s Something About Mary, Groundhog Day and his comedic sketches on Late Night with David Letterman), for example, plays the town’s embattled mayor and Rose’s nemesis — there’s another presence in the show that viewers, especially here, will recognize: their own backyard.

Filmed on location in Goodwood, Ont., and at the Pinewood Toronto Studios in the Port Lands, the show offered an opportunity for the stars to work closer to home for a change, or in O’Hara’s case, closer to her beloved summer digs in Muskoka.

“I got to go to my cottage, which was part of the appeal of working on this, too. Aside from all the other lovely things about working on this show; just a bonus,” she says. “But then I’d drive there and I’d have like a Monday call, 7 or whatever, and I took all the back roads, which I’ve never driven on in my life in Ontario. So beautiful—really beautiful! The farmland, the rolling hills; what a great way to go to work.”

In pitching the riches-to-rags story, the CBC, Dan says, jumped at the opportunity.

“They just understood it. They understood what we were going for, and there was no pushback in terms of changing the creative direction of the show,” he says. “I think that’s really what gave us the confidence to say, ‘Yeah, let’s do it.’ I don’t think the show would have been the show that it is had they not been so supportive and encouraging and trusting — above and beyond, trusting.”

With CBC on board, Eugene was able to return to his base in North Toronto, his Rosedale home where he raised Dan and his daughter Sarah.

Still, Eugene notes, don’t expect to see any references to certain notorious local celebrities or anything else that just screams, “This show was filmed in Toronto.”

When asked if audiences might ever see such a moment in Schitt’s Creek, Eugene smiles a little, seemingly expecting it.