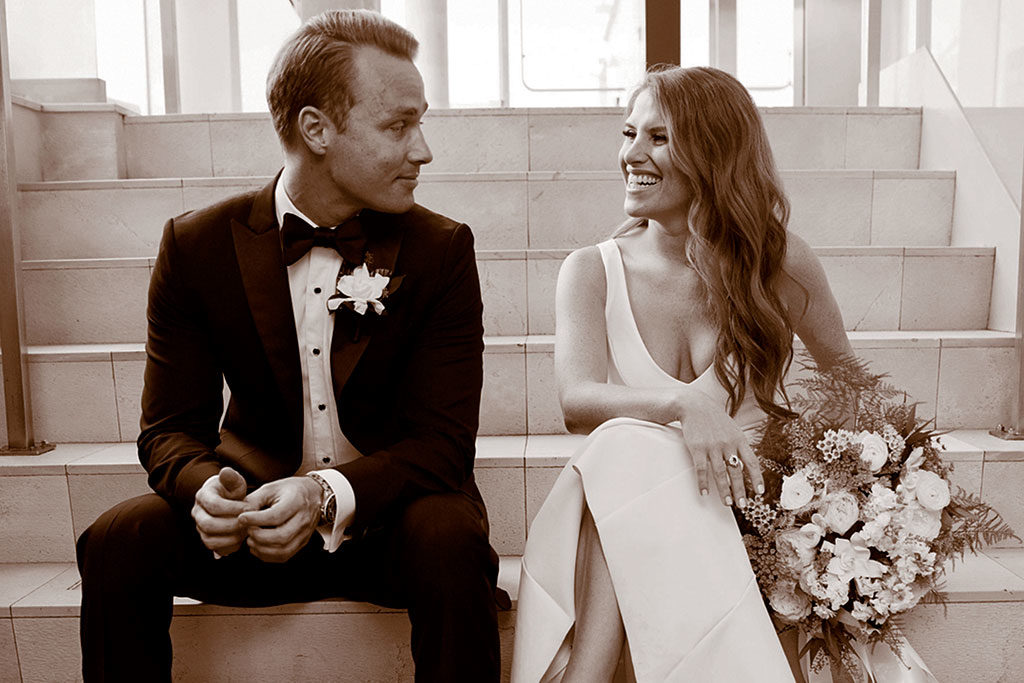 Devon Soltendieck, who first came to fame in 2004 after winning MuchMusic’s VJ Search, has now become a staple on T.O. televisions. That competition kicked off his career and also introduced him to his future wife, Ashley Applebaum.

After a three-year stint as a news reporter and anchor for CP24, Soltendieck then hosted Pop Quiz, a pop culture game show.

He is now a senior entertainment reporter for etalk, which airs weeknights on CTV.

Soltendieck kicked off awards season coverage live from Los Angeles at the Golden Globes and will continue to support the etalk team as they cover the Grammys and the Academy Awards this February.

How they met
Ashley and I met when we were both working at MuchMusic. She was my publicist at the time and part of her job was accompanying talent to events. The first chance I had, I used that loophole to get her to spend an evening with me at an event. After some work on my part and a few drinks for both of us, she finally agreed to go on an actual date with me.

The first date
A few days later we went to my favourite bar at the time, Souz Dal, on College Street. I remember two things from that night: First, I was not just late, but, because of a subway delay, I was very late. I think it was close to 40 minutes, so she wasn’t exactly thrilled. Second, I laughed more that night than I had in years. I’d never met someone who I connected with so quickly and deeply. It was exciting, scary but, most of all, pretty magical.

The courtship
Ashley and I got serious pretty quickly. It just instantly felt different than any relationship I’d ever been in. It’s been a wild ride. We’ve travelled the world together, lost family members together, we’ve seen incredible successes and some incredible failures together, but through it all we’ve always remained a team. I’m lucky to have a wife and partner who truly understands and knows me.

The proposal
My family owns a country home an hour north of Montreal, so many of my best childhood memories originate there. It’s also where my and Ashley’s families met for the first time, so I knew I wanted to propose up north. On Thanksgiving weekend in 2014, while on a hike to our favourite lookout point of our lake, I pulled out some plastic cups, a bottle of bubbly and the ring out of my backpack. Then I got down on one knee and proposed. I had also secretly planned for her parents to come in from Toronto and sneak into the cottage while we were hiking. So by the time we got back, both families were there to celebrate. It was an amazing night.

The wedding
We wanted our guests to feel like they were going to a great party where two people also get married. The Thompson Hotel in Toronto couldn’t have been a better choice. They were incredible. We had about 60 friends in our suite until about 5 a.m. It was a very memorable night.

The home
We’ve been at Avenue and Eglinton for two and a half years. Before our wedding we had just gutted the home, so we decided to spend the honeymoon budget on our basement. It’s the best money we’ve spent. We don’t regret it for a second.

Balancing work and marriage
We both work in the same business, so it’s a language we’re both fluent in, so to speak. Travel is a big part of my job at etalk, but when I’m not on the road, I’m with Ash. We spend 99.9 per cent of our time together, so much so that we’re starting to worry about losing friends. We both love our careers, but we love each other more.

Shared hobbies
I’m very passionate about fitness, and I’ve finally convinced her to wake up at 5 a.m. every day with me and do CrossFit. We love it. We have similar and separate interests, but I’d say our number one hobby is spending time together at home, cooking with a glass of wine in our hands.