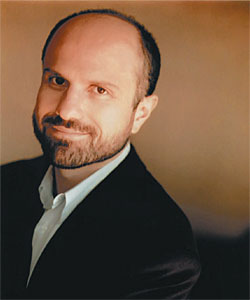 STROLLING ALONG ST. CLAIR on a glorious spring morning after coffee at a neighbourhood café, Enrico Colantoni rhapsodizes about the city that raised him.

“When I was little and my older brother was in high school at Oakwood Collegiate, he always volunteered to walk me to St. Clair Elementary,” he says.

“It wasn’t until later that I realized I was just a great excuse for my brother to cut class and hang out in the pool hall that was next to my school.”

Shrewd siblings aside, growing up near Bathurst and St. Clair was a safe, happy existence for the 46-year-old star of the hit CTV cop drama Flashpoint. In fact, once he starts reminiscing, he can’t stop.

“Back then, rush hour really was just an hour. You could set your clock by rush hour on our street — I wasn’t allowed to play outside between four and five p.m.,” he says.

Today, Colantoni is back in Toronto, and he still drives by his childhood home from time to time. The pangs of nostalgia get him every time. “I always tear up,” he says. “The tree that was in the front yard is gone now.”

Some of his tales from childhood make Toronto sound like a small town. “My parents were very frugal, and my dad only ever gave me a dime when the ice cream truck came, even when the prices went up,” he says. “The ice cream man must have taken pity on me, because he would give me a smaller cone than any of the other kids, but he never turned me away.”

After a brief stint at the University of Toronto’s Erindale Campus, Colantoni followed a well-trod path into show business. He left Toronto for New York City, then moved on to Los Angeles.

In L.A., he developed a respectable acting career, becoming best known for his work as Elliot on the ’90s sitcom Just Shoot Me and, among younger audiences, as the father of the eponymous teen sleuth on the mystery series Veronica Mars.

But Toronto’s charms kept Colantoni yearning for home. “It’s funny because I had started to feel nostalgic for home a few years ago,” he explains. “I’m just an Italian kid from Toronto. Los Angeles was starting to wear on me.”

Colantoni says he didn’t realize what he had until it was gone. “The diversity in this city is such a gift. Growing up in Canada, you get a better sense of the world in general. The U.S. is more isolationist, where most people don’t care about the wider world,” he says.

Flashpoint offered Colantoni the very opportunity he was hoping for — the chance to return home. “Sometimes the fates just start bringing you luck,” he says. It seems appropriate, too, that Colantoni is here to work on such a Toronto-centric show as Flashpoint (plus, his big brother was a cop for 30 years).

The show chronicles the assignments of an elite tactical policing unit called the strategic response unit, which is partly based on the Toronto Police Force’s emergency task force. Colantoni plays the brusque but compassionate sergeant in charge of the unit. Each episode opens with a quick slice of a high-stakes, sometime violent scenario, then flashes back to several hours earlier. The episode then unfolds on the events leading up to that climactic moment.

Flashpoint never hides the fact that it is set and shot on location in Toronto, although since the series was picked up by CBS last year, the script no longer refers to the city by name. (Street names, however, remain mostly intact.)

Toronto audiences seem to appreciate the familiarity of the setting, and so does Colantoni.

“There are all these references that are like inside jokes to Torontonians,” he says with a laugh. “We have to disguise it a little for the American audiences, but we know what’s really going on. But seriously, I think there’s something a little bit futuristic feeling about the show, and that’s partly why it’s been such a success in America.”

Indeed, the show is successful on both sides of the border. It has consistently led its time slot in Canada, and when Flashpoint debuted south of 49th parallel last summer, it led its Friday night time slot with well over seven million American viewers. Ratings have risen steadily over the course of the show’s run, especially stateside.

Back in Canada, Colantoni has been staying in an apartment near Dufferin and Bloor, but he’s been looking for more permanent digs, and he’s pleased to learn that he has arrived home during a good time to purchase real estate. “I made an offer on a place last week,” he says secretively. “I hope it wasn’t too low!”

He takes pleasure in visiting places that were favourite haunts, such as beloved family restaurant La Bruschetta (1317 St. Clair Ave. W.) and the gelato emporium La Paloma (1357 St. Clair Ave. W.), and seeing that they are still doing well.

But there’s more to it, he says. For one thing, he says, you can walk just about anywhere in the city, something Colantoni missed during his west coast swing. “After walking everywhere in Toronto and New York, I tried walking when I first moved to L.A.,” he says. “There are all these long stretches of road that look the same forward and back. After 20 minutes of getting nowhere, you feel like you’re trapped in some surreal nightmare.”

Colantoni is especially excited for his kids to visit him in Toronto. (He has a son, 11, and a daughter, 9, who live with their mother in Los Angeles.) “I really want them to have a larger reference of the world,” he says. “And this city really has everything. I think it would be great to explore with them.”

Since returning, Colantoni has been thrilled to reconnect with old friends and family. In a twist worthy of a Hollywood romance, he’s recently started a relationship with an old friend from school. He’s demure about it, but his eyes radiate happiness. “It’s really great,” he says, smiling shyly. “She’s known me since I was young and all bright-eyed and bushy-tailed, so there’s no pretension about anything.”

He’s also written a screenplay inspired by his childhood and set in his old neighbourhood. Nothing’s set in stone yet, but he’s in talks with producers to get it filmed. (In Toronto, naturally.) “I’ve been trying to write it for years, and it finally all came together when I came back to Toronto,” he says. “There’s something about this place.… I don’t think I could write elsewhere.”