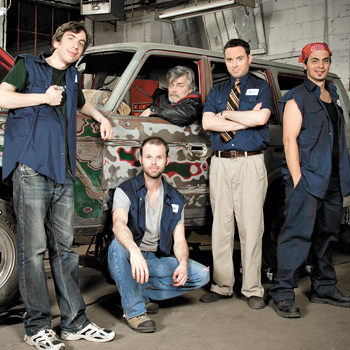 What can you do in seven minutes?

In comedy, it’s enough time to deliver a good stand-up set or perform a sketch or two. But in the world of the sitcom, it’s just act one of a three-act structure that usually runs about 22 minutes. Traditionally, the storyline needs to stretch out to about a half an hour to allow for enough character development and narrative beats.

But the Internet is changing all of that. The last decade has not been kind to the traditional sitcom. Reality programming and a shorter attention span make it difficult to get that sitcom idea up and running.

So if you’re a bunch of funny guys with a proven track record, what do you do? Give up? No. You embrace the brave new world of the webisode.

And that’s exactly what sketch troupe the Imponderables have done. The group has been the next big thing since 2004 but never got the big TV break everyone predicted. So they did it their own way — on the web, where no one could stop them.

The series, called Bill and Sons Towing, is a 10-episode sitcom that features the members of the group as four brothers that have taken over their ailing dad’s (played by Nicholas Campbell) towing business. Of course, the brothers have differing approaches on how to get this accomplished. Brother Eric, played by Eric Toth, is a failed MBA grad who tries to apply professional business principles to a dodgy business. Brother Dave, played by Dave Brennan, is the sweet-natured idealist who wants nothing more than to be liked by the customers — even if they take advantage of him. Brothers Jon and Tony, played by Jon Smith and Tony Lombardo, are the lazy dim bulbs who just don’t take the business all that seriously and never met a beer they didn’t like.

Episodes run about seven minutes and are best watched sequentially. I watched the first three and found them affable, with a nice loose charm, but nothing that broke any new ground, especially for the uncensored platform of the Internet.

Then I watched episode four.

To say it rocked my world is a complete understatement. Titled “Bikini Calendar,” it takes off in a direction so nervy and unique that it could hold its own with any episode of Curb Your Enthusiasm or Louie. I don’t want to spoil it for you; watch it yourself and see if you don’t agree.

Bill and Sons’ office really looks like a down-at-the-heels towing garage, and the whole enterprise reminds me of the early days of Taxi. It still needs its Andy Kaufman character to take it to the next level, but the group has managed to corral acting greats such as Sonja Smits and Jayne Eastwood.

The Imponderables aren’t the only Canadian comics using the new short  format. Guidance is a 15-episode series that stars Adam Cawley, Rob Baker and Pat Smith as inept, even amoral guidance counsellors in a big city high school. And then there’s Comedy Bar, the web series about the people who run … Comedy Bar, the club on Bloor Street West.

Consider these shows the next time you have seven minutes to spare. You won’t be disappointed.