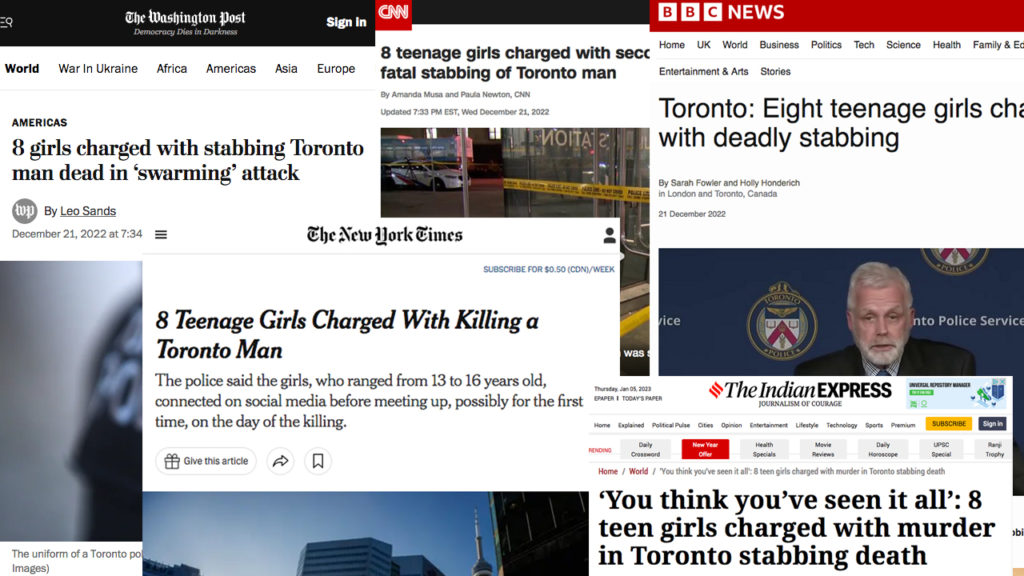 The case of eight teenage girls charged with second-degree murder in the death of a Toronto homeless man is set to return to court today. The “swarming” attack by the teens — some as young as 13, rocked Toronto and consumed the nation, as people tried to come to terms with this senseless crime. But now the scandal has spilled beyond Canada’s borders, with high-profile international media taking notice.

Prominent newspapers and websites from the U.S., the UK and even as far as India have reported on the crime which took place on Dec 18.

In the United States, NBC, CNN, The New York Times and The Washington Post were just a few of the outlets that posted news of the incident and while these articles contained the facts of the case, more than 300 comments were posted on The Washington Post’s website following the article.

“Trashy parents spawn trashy children. Perhaps the parents should be put on trial,” read one comment.
“What is happening in Canada? First a multiple shooting at a condo and now a teenage swarming knife murder,” commented another.
“Seems like a gang initiation ritual or something. Recently been reading about quite a few violent incidents in Canada. Perhaps the crime wave is getting bigger up north. Chicago feels safer now,” read another comment.
Over in England, the BBC was quick to pick the story up, “Toronto: Eight teenage girls charged with deadly stabbing” read the sensational headline. Other UK news outlets were quick to follow suit.

Eight teenage girls have been charged with murder in the Saturday night stabbing of a 59-year-old man in downtown Toronto, authorities said. Police said the girls, aged between 13 and 16, seem to have met online before meeting in person on the night of the attack, possibly for the first time.

“Group of eight teen girls murder homeless man ‘to steal his bottle of alcohol'” read the headline from the Daily Star.

Police have charged eight teen girls with the murder of a homeless man. A 59-year-old man, who has not been identified, was stabbed near the central Union train station in Toronto, Canada. A report from Buzz.Ie claims emergency services were called at 12:17am on Sunday (December 18) in the York Street and University Avenue area.

The article posted by British tabloid newspaper, The Sun contained a video and the headline: “Deadly ‘Swarm’ Eight teen girls ‘stab homeless man, 59, to death’ after meeting on social media to ‘swarm’ victim outside train station.”

EIGHT teenage girls have been accused of stabbing a homeless man to death after “swarming” him outside a train station. The teens, aged between 13 and 16, are believed to have met on social media before setting out to attack the 59-year-old in a plaza near the main railway station in Toronto, Canada.

“You think you’ve seen it all: 8 teen girls charged with murder in Toronto stabbing death,” read the headline from The Indian Express.

‘You think you’ve seen it all’: 8 teen girls charged with murder in Toronto stabbing death

Eight teenage girls who apparently met on social media have been charged with second-degree murder in the stabbing death of a 59-year-old man in Toronto, police said Tuesday. Investigators allege that the girls assaulted and stabbed the man in the city’s downtown core early Sunday morning.

Today’s court hearing is expected to set dates for all bail hearings in the case.