Edge: From Orangeville kid to WWE champ - Streets Of Toronto
Skip to content 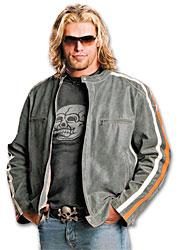 Toronto’s testosterone levels are set to spike tomorrow when WWE Smackdown comes to town. We caught up with Edge, the current WWE heavyweight champion, who opened up to us about making it big, the Edgucator (his signature move) and his Mount Everest aspirations.

How did a boy from Orangeville become the WWE World Heavyweight Champion?

I won a contest by the Toronto Star. You had to write an essay about why you wanted to be a wrestler, and the winner would get free training. So I thought, "OK, this is my shot." So I wrote this essay and the manager said, "Come on down so we can take a look at you." So I went down the next week, no insurance on my car, made it down there. They called me and said, "OK, you’re the guy, we’re going to train you for free." Coming from a single-parent household, I would not have been able to afford the $3,000 at 17 years old to start. I would have eventually done it somehow, but that sped up the process massively.

What was your argument in your essay?

I basically said I’m willing to starve to make it. It didn’t expect it to be all limousines and things like that. I assumed it was going to be pretty lean for a long time, and maybe for the entire career. But I just wanted to do it.

And was it pretty lean?

It was pretty lean for the first five years or so. A good payday was $75 a night, but you’d have to usually drive 20 hours to get to it, so you’d spend more than that in gas. I remember doing shows in little pubs and taverns in Toronto where I’d pay for my wrestling licence, which was $75, and then get paid $40. You did it to cut your teeth and get some form of experience and just get your name out there.

What was your big break?

I went to college for radio broadcasting at Humber with the mindset of "OK, this will help me with my delivery and my timing," because you’ve got to hit a radio spot right at that point  — "OK, 30 seconds, you gotta hit it!" — and so if I got injured wrestling at least I had a backup plan. A week after I finished college, with my marks hanging over my head so I was stressed, I got a call from WWE. They said they needed someone to fill in at Copps Coliseum. I didn’t have a car and my buddy had to come pick me up. I was 22 and just went out and did what I could to make an impression. After that I went to Japan, all across Canada to get more experience, but at least [the WWE] knew I was alive. About a year later, I got signed.

But then in your WWE debut, you legitimately injured your opponent, right? Yeah, I had probably the worst debut you could imagine.

How awkward was that conversation afterwards?

Well, they took him to the hospital so I didn’t even get to talk to him. The really awkward moment was where the ref was like, "He’s knocked out." And I’m like, "Oh god! This is my debut?" I think you can actually see me say, "Oh sh*t". And I was genuinely concerned for him, too. After that, there are only two ways to go: up, or out of the company. Luckily, they kept me around.

Your finishing move is called The Edgucator. Remind me how that one goes?

Well, I have a few. The main one is called "The Spear," but yeah, I cheesily tried to incorporate "Edge" into as many moves as I could. There’s "the Edgecution," "the Edgucation," "the Edgumatic." I also have "the Con-chair-to," which is hitting a guy with two chairs, but now because we don’t hit people in the head with chairs, I do it to the knees and stuff like that.

Man‚ you need a brand manager for all these moves.

So now that you’re the world heavyweight champion, what’s next on your to-do list?

Honestly, it’s going to sound stupid, but this is the tenth time I got it. I always said I’d do it once, so anything else from here is like bonus. Honestly, now I’m starting to think of things I want to do after. I want to train and make an attempt at Everest. I don’t know if I’ll ever be able to do it, but I think it would be cool to give it a shot. I still love it, it’s the greatest gig in the world for me, but I know my body can’t keep up with what my mind is telling me.

Are there any surprises in store for your return to Ricoh Coliseum? Well, I’ve never been to Ricoh, not for a Marlies game, not anything, so I’ll try to plan something out. I think it might be a fans’ choice match, where they get to decide what they see. So that should make it fun. I’ll find some way to make it fun. I’ll get a hockey stick or we’ll use the boards or something. I’ll find a way to put some Canadian flavour in it.