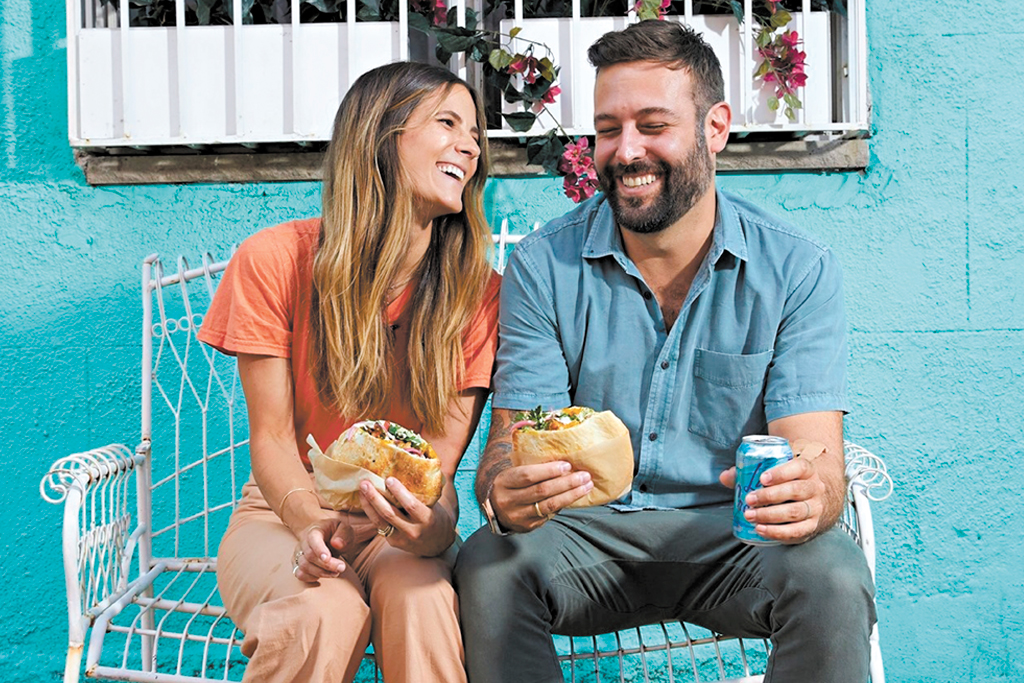 Top Chef Canada host Eden Grinshpan has a new cookbook, Eating Out Loud, out just in time for the holidays. The Toronto-born chef now calls New York home, and that’s also where she met her husband Ido Nivron. The pair and their daughter are currently back in Grinshpan’s hometown staying with her parents in North York during the pandemic. Here’s the story of how they met.

I was visiting Israel for a couple weeks, and the last night I was there I went to a birthday party for a friend at a bar in Tel Aviv. These two girls at the bar heard me speaking English, and they started talking to me about a great guy in N.Y.C. After talking to me for a bit they thought we would be a great match, so they messaged Ido on their phone on Facebook. They sent him my name and he added me as a friend the day after. I flew back to New York the following day, and we met in person for our first date four days later.

We went to this small bar in the lower east side called Marshall Stacks. We both went on this date not thinking it was a date, more of a hangout, so neither one of us really looked at each other’s Facebook profile. I arrived early and already had a glass of wine before he got there. I remember seeing Ido for the first time. I was like, “Oh my God, he’s hot!” The second he walked in it turned into a date that I was not expecting. Ido felt the same. We talked all night and stayed until the bar closed. It was the best night. It was like hanging out with your best friend.

After that date we were inseparable. We spent two weeks together, and then Ido had to go to Israel for a work trip for a week. When he came back, he proposed to me the morning he landed.

Ido landed around 6 a.m. and came straight to my apartment. He immediately suggested we go shopping for breakfast ingredients at my favourite grocery store, Essex Market in the lower east side. He wanted to make me shakshuka. When we got to the grocery store he asked me where in the market I do most of my shopping, and after I showed him, he got down on one knee and asked me to marry him. I was in complete shock! It was the most amazing, exciting and romantic moment of my life.

We were married at the Gramercy Park Hotel in New York City. We went on two honeymoons. The first one was to Jamaica for four days, and the second one was a year later, and we went to Thailand for two weeks. Both were magical.

We have one kid. Her name is Ayv Rose Nivron, and she is three and a half years old.

Date nights are so key and so important. I know it sounds predictable, but it is true, and I am not talking about double dates or group hangs. I am talking about just you and your partner, talking, exploring and trying something new or fun together. When we can, we also love to book little weekend trips together.

We love spending quality time as a family, going out for meals, love to cook, going on long walks and window shopping, cuddling and watching movies together, as well as dancing and just having fun and being spontaneous. We bring out the kid in each other, and I love that about our relationship.

Communication, for sure. We never let anything build up and always talk. We make time for our relationship. Even just having a coffee together in the morning, lots of hugs and kisses. We also plan little adventures together, like a spontaneous afternoon of shopping and an early dinner.