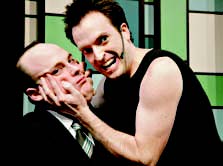 I CAUGHT THE opening of the new Second City revue, 0% Down, 100% Screwed, a show I was looking forward to seeing for two reasons.

First, topical satire thrives best in an environment where there’s a lot going on, and with the recession, a new U.S. president, and the recent parliamentary squabbles, there’s sure been enough raw material to inspire a legion of pointed sketches. In addition, the show is directed by Melodie Johnson, known for her uncompromising attack as a performer, writer and director.

I was not disappointed, for the most part.

The first three sketches set a high standard. Yuppies on a chain gang sing about oil prices and job losses. This sketch is followed by a neat two-hander between a cabbie from Gaza and a downsized Bay Street type commiserating over their problems. The piece nicely illustrates how spoiled we are even in our “tough times.”

The hilarity continues with an up-to-the-minute sketch about a meeting in Ottawa between Obama, his team and the Harper cabinet. Diplomacy turns to insult as the clash of personalities becomes ugly and hilarious. There’s a joke about a humidor that made me burst out laughing, but it creeped out the audience; time will tell if it stays in the show.

The revue then turns away from its stated theme into more general satire, which is usually the case in Second City shows. It would be tough to sit through two hours of material on any single topic. The writing is strong, and the cast is able, although not everything works equally well.

Marty Adams once again proves himself to be the cast’s most valuable player. Even though he’s lost some weight lately, he still uses his girth to ample comic effect. He’s wonderful in a sketch about a fundraiser in which 50 per cent of the prize goes to the winner and 50 per cent to the charity. The winner is expected to give his winnings back to the charity, but nope, Adams isn’t having any of it. He’s keeping the money, to the chagrin of the other charity-goers. Best line: “It’s my right to blow the money on something stupid, like an RRSP.”

The big closer of the first act features another standout in the cast: Reid Janisse, who plays an American TV host brought in to juice up a CBC commentary show.

The second act opens with a kids’ puppet show in which the puppeteers let their private and personal lives leak out into the performance. It’s a brilliant conceit, made even better by the bravura physical comedy of the cast members’ marionettes. I enjoyed a monologue by Caitlin Howden as a bitter, suicidal Wal-Mart greeter fed up with her life. It’s a lot funnier than it sounds.

There’s also a timely bit on the impending closing of Guantánamo prison that imagines what might happen to torturers now out of a job. My favourite sketch of the evening was a character study of two thugs, beautifully played by Adams and Darryl Hinds, who are too polite for their own good — a masterpiece.

It was Second City’s 35th anniversary in the city, and the current show captures many of the strengths that have made it a Toronto institution. Now if they can only keep the humidor joke…