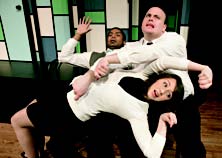 EVERYWHERE I GO, I get asked the same question, “How’s the recession affecting comedy?”

Ah, yes, the recession. A topic that has officially replaced the weather as the starting point of small talk from coast-to-coast. The quick answer is: not that much.

The truth is that this recession has not affected all of us equally. Sometimes a simple luxury can be less expensive than a complicated necessity. On the retail level of putting customers into seats, not much has changed. It’s always been hard to sell tickets. When times are bad, comedy clubs don’t do much worse, but when times bounce back, they don’t really improve much either.

On the plus side, it’s important to remember that the product is inexpensive. Only the hard-core unemployed can’t find the $15 for admission. I spoke to a major theatrical agent, who told me that a price point of $30 seems to be the threshold at which consumer resistance now stands. But, interestingly enough, Seinfeld, Russell Peters and Dane Cook tickets have been flying off the shelves at up to $200 a pop.

Perhaps comedy (and entertainment in general) has crossed over in our media-rich environment from luxury to necessity. The young, of course, are the biggest consumers of live comedy, and for many of them, the recession is business as usual: they’ve always lived on ramen noodles. Your portfolio can’t take a beating if you didn’t have one to begin with. If you still live at home, you’ve always enjoyed the paradox of being poor with a large disposable income.

Then, there’s the theory that during hard times people crave laughter and escape. This is based on the evidence that movie tickets soared during the ’30s, mostly for comedies. And, the film business is posting record sales over this past year. But it also applies to a lot more than comedies. It’s the price point theory in action, again. At less than $15, movies are a bargain when compared to travel and expensive meals.

But if we venture beyond the retail level of comedy, the effects of the recession begin to become more apparent. During the past year, I opened up new clubs in St John’s, Calgary and Edmonton. The franchisees in these places had a hefty price tag to meet, which could only be secured by bank financing. I doubt whether that would be possible in today’s economic climate. And if you’re a fan of comedy on TV, watch out. It’s brutal out there for producers. It doesn’t matter how great your comedy idea is, networks are in no position to finance it.

So with the recession as the number one topic on everyone’s lips, will you see a number of recession-themed routines at your local comedy club? The current Second City show has at least two recession-specific sketches in its show, and they get big laughs. But it stops there. And local stand-ups are shying away from the topic, except for the odd reference. “It’s a downer, period,” one local comic told me. “Why remind them of the very thing they’re here to forget?”

Recessions are not new to me. I’ve been in business for more than 30 years. I weathered the bad times of the dot-com bust and the recession of 1981. That was the year when comics had to sleep in my club to prevent the sheriff from locking us out for nonpayment of rent. Ah, memories.