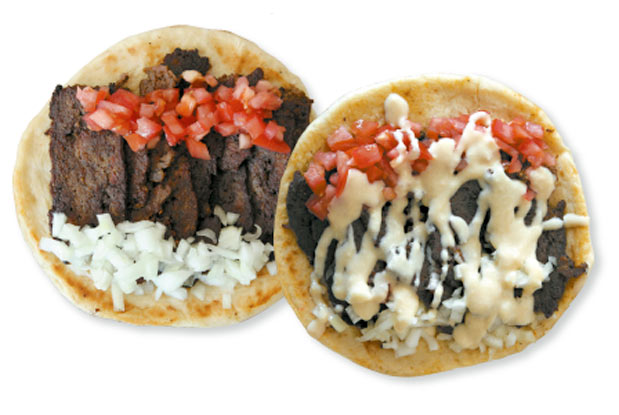 Canadian food is disgusting. As a nation, we are stoically proud of this fact. Few countries are as talented at taking gross food and making it even more gross than it was previously. We think tomato juice should have clam juice mixed into it. Our French fries come drenched in gravy, with cheese curds that squeak. And when a pita wrap is put into the hands of a Nova Scotian, it ends up drowned in a sauce that’s so sweet it simply defies common sense.

Until recently, many Torontonians were unaware that Nova Scotia had a distinctive take on the gyro (or, if you’re Turkish, the doner kebab, or, if you’re Arab, the shawarma), known variously as an East Coast donair, a Halifax donair or a Nova Scotia donair. This food is as Canadian as poutine and equally as obnoxious.

The East Coast donair is what happens when you take some pita bread, put meat on it (usually beef) and apply too much of a sauce made from evaporated or condensed milk. Add some chopped onions and tomatoes. Do not add tabbouleh, pickled beets or tzatziki.

Historical accounts of the donair are fuzzy. One version contends that they were invented in the ’70s by brothers Peter and John Kamoulakos. They had been trying to sell standard lamb-based gyros, but pitas stuffed with meat and yogourt were somehow not as easy to sell as pitas stuffed with meat and yucky-yummy white sauce. The new sweet-drenched pita was a hit, and the brothers’ business went on to become a huge success as Mr. Donair. Meanwhile, Nova Scotia chain King of Donair claims to be the progenitor of the whole thing.

These donairs have been available in Toronto for years now at places such as Little Italy’s College Falafel, but they were recently ushered into the spotlight when Nova Scotia expat Geoff Hopgood opened Hopgood’s Foodliner in February and put them on the menu. Then The Fuzz Box opened in April, billing itself as the first place in the city to specialize in them.

In Nova Scotia, donairs are widely regarded as an ideal post-binge pick-me-up, but they make for a great appetizer at Hopgood’s Foodliner ($12 for two). Sure, they come served on a crinkled paper bag, but the trashiness is mostly just for show: Hopgood uses sous vide and other elaborate cooking techniques to make them. The result is one of the best things to eat on the entire Roncesvalles strip.

At Hopgood’s, donairs are made with a mixture of ground beef and pork that’s seasoned with oregano, garlic and paprika and sliced thin, like gyro meat. Set atop fluffy, house-made pitas, they come with appropriately copious amounts of white sauce made with evaporated milk, sugar, garlic and vinegar, then topped with chopped onions and tomatoes. This uppity version of the donair tastes remarkably true to something you’d find in Halifax.

Fresh off Hopgood’s buzz, The Fuzz Box opened to a fair bit of media attention due to the fact that the owner, first-time restaurateur Neil Dominey, claims he’s the only one in Toronto (other than Hopgood) who’s making East Coast donairs properly. There are several requirements, he says: the meat should be spicy; the toppings should consist only of chopped tomatoes, chopped white onions and sauce; the pita should be thick and moist; and the meat should be cooked on a spit.

Donairs toe the line between good and gross rather
frustratingly, as any proper Canadian dish should.

The donairs at The Fuzz Box ($4.99 to $8.99) are big, messy and meaty. Very few people will need a large one to themselves, but no matter which size you get, your body will not thank you for putting one of these into it. The trick is probably to indulge in a few drinks beforehand as a preparatory relaxant. It’s what everyone in Halifax does before eating donairs. And while Hopgood’s donairs are straight up good, these ones toe the line between good and gross rather frustratingly, as any proper Canadian dish should.

The meat in Dominey’s donairs is made of ground beef mixed with spices and bread crumbs. It’s oven roasted, then seared on a flat top grill. Dominey dismisses the blatant contradiction in not using a spit by promising that he will, eventually, incorporate some kind of rotisserie into the process. His sauce, meanwhile, is made with evaporated milk, sugar, garlic powder and vinegar.

His product is fine, as far as trashy products go, but his attempts to downplay College Falafel, which has been serving East Coast donairs since 2004, should be taken with a grain of salt. The donairs there come on a thin pita — too thin, Dominey says, for Haligonian tastes — and toppings include lettuce and tabbouleh, which he says make them too similar to a gyro.

But College Falafel co-owner Bardhyl Musa is merely bemused at the notion that he’s somehow not doing things properly. The confidence is not unfounded: his restaurant is pimped out with handwritten letters from East Coasters who say that his donairs remind them of home.

Now, handwritten letters are one thing, but live customers are another. When I ask about the donairs — “do these come with the supersweet secret sauce?” — Musa doesn’t even have a chance to answer.

“Yes,” a nearby customer exclaims, nodding with a passion singular to weird-food enthusiasts. “It’s the one.”

Originally from Albania, Musa doesn’t centre his business around these donairs, but they are here for $6.99 a pop. He’s secretive about how they’re made (this much is certain: the beef is cooked on a spit), but the sauce is sweet enough to be considered sufficiently obscene, which is really all that matters. Toppings are optional: tomatoes, red onions, tabbouleh or lettuce, and, yes, it’s all packed inside a regular thin pita, which Musa says absorbs the sauce better.

Musa’s donair is noticeably different than Dominey’s or Hopgood’s, but it hits the same notes, so any debate about “authenticity” is mostly irrelevant. Musa also makes a tastier, if less substantial, donair than Dominey.

Now that the secret’s out — that pita wraps can indeed be made to suit the irreverent Canadian palate — East Cost donairs are bound to start popping up all over the place. And although that may be bad news for healthy digestive tracts, it’s certainly good news for the hangover afflicted.