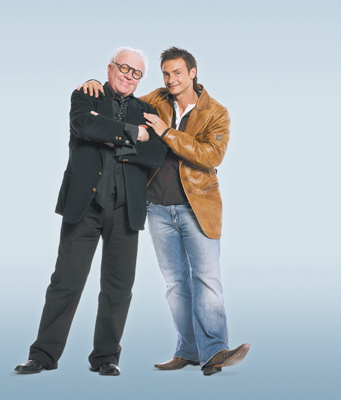 “I COULDN’T STAND working with Robert every day,” Marc Anthony sighs when asked what he didn’t like about the new reality TV show Superstar Hair Challenge, airing on Slice this August.

Robert is Robert Gage, the legendary Yorkville stylist, who has been cutting and combing Forest Hills’ finest coiffes for a quarter of a century. He’s also the city’s first “celebrity hairstylist.” A title that Anthony also currently holds.

“I’m just kidding. I’m kidding,” Anthony laughs, “Robert was a blast. I met him on the first day of filming, and by the middle of the second day, it was like we’ve known each other for years.”

This was in January 2007, when they joined TV host Karen Bertelsen for the taping of Slice Network’s Superstar Hair Challenge. They were hired to judge hairdressers from across Canada in the dynamic — and often dramatic — seven-episode show that premiered this summer.

The show follows a simple-yetsuccessful reality TV model where the contestants compete in challenges such as making over three single women who are ready to tackle the dating scene. After each episode a contestant is eliminated.

Gage says it boiled down to the one the judges liked the least. “And we would argue about it. We would get around the table and scrap about it: ‘You’re falling in love with this person!’ ‘No I’m not, I just think that the hair is really good.’” He pauses and laughs. “It sort of must be like the [Conrad] Black trial, the people on the jury. It must be like that.”

Gage says it’s true he and Anthony bonded instantly. “I just liked him,” he says. “We’re both successful in a monetary sense. He’s rich, rich, rich. We’re both from a hairdressing family.

We both understand how the business works. It’s always better when your clients look better, when you make them more beautiful, more in step with their life. There’s no sense in doing a faux hawk on a banker. There are just certain things that are appropriate. You have to be a witness to what is out there so that you can tell what is going to work on this person or that person.”

Both Gage and Anthony are born and raised Torontonians and have seen the city blossom along with their careers.

Gage is the famous hairdresser who ran the Rainbow Room, a popular hair salon in Toronto in the ’80s and ’90s, and became the king of Forest Hill gossip thanks to his well-connected clientele. He’s also quick to clear up rumours about himself. A recent article in the Toronto Star stated Gage is 65 years old. “Well … I do not charge $120 — I charge more — and I am not 65,” Gage asserts.

Gage is approachable and friendly, both with his clients and his staff. He jokes with everyone and he knows how to compliment women. “I was surrounded by beautiful women my whole life. Beautifully dressed, fabulous makeup. I’m used to beautiful women. I grew up with beautiful women,” he says. The beauty of hair is in his blood. His mother, his grandfather and his uncle were all hairdressers.

Anthony, 38, has a distinguished hairstyling pedigree as well. His parents owned a small salon in North York. “I remember being there when I was four or six years old, being a part of the salon,” he says.

When his father passed away, Anthony (just 16 at the time) put his career plans on hold and took over the family business.

The business thrived and Anthony decided to branch out opening his current salon at Avenue Road.

He also developed his Marc Anthony True Professional Hair Care products, which he sold in only three stores. Today he sells his products in 30 thousand stores worldwide. He has 30 people on his hairstyling team, and in the fall he’s opening another location in Yorkville on Avenue and Bloor.

A youthful father of two, Anthony makes for an engaging TV persona. He has an assured manner when discussing his own celebrity and that of his clients, who include Paris Hilton and Coldplay.

“Not very often will you find a boring hairstylist. They’re usually off the wall. Totally unlike normal people.”

Gage and Anthony consider Toronto a fashion-forward place. “We have the most fabulous group of people,” says Gage. “We have the super, super, super… super rich. We sometimes have traffic jams in front of [the salon] with limousines.”

Robert Gage’s salon is a discreet, ivy-covered building in a series of quiet, elegant two-storey townhouses, right off of the bustling Yonge St. strip. “It’s a great area,” says Gage. “And this is a funny salon compared to all these modern ones, sleek and white. Here you have rooms and staircases. It’s a former house of horizontal refreshment.”

Anthony’s Avenue Road salon (one of the sleek ones) no longer takes appointments. But if he did, he would sit down with his new client and have a conversation first. He calls this an “event appointment” and says its main purpose is to figure out what it is exactly that his prospective client wants.

He also notes that when he started his clients used to be specific but also less open-minded. “Now, it’s transitioned completely. When they sit down with me they are all ears and want to hear me design a look,” he says.

“This kind of business is about couture,” says Gage. “There are hairdressers in this town that are famous. Or have been. That basically give the same haircut to every person, long or short, same haircut that is not spectacular.”

It was the lack of the spectacular that would eliminate contestants from Superstar Hair Challenge.

“There was this guy. He was a fabulous hairdresser and did a haircut that he loved, but it didn’t work for the model. It was ugly,” Gage says.

Not that Gage would openly say it was ugly. He knows how to spare someone’s feelings. It’s Anthony who is the tough one.

“He seemed to relish in getting rid of people,” says Gage. “I didn’t want to hurt their feelings too much. Some of the girls had their hair just clipped right off! They would burst into tears right in front of a camera,” says Gage.

Anthony is sympathetic though. “The competition became more and more difficult because you saw how hard they wanted to win and how much effort and passion they’d put in and how hard they were working,” he says. “But every show someone had to be sent home. It had to be done.”

Anthony says he was looking for a hairdresser who was, above all else, talented technically. Someone who was passionate, and very humble. Someone who dressed the part. A successful competitor had to have that charismatic star quality: “An average plain personality doesn’t cut it.”

“There were some crazy personalities [on the show], but then hairdressers usually have crazy personalities, so that’s to be expected,” says Gage, agreeing with Anthony. “That automatically makes good TV. Not very often will you find a boring hairstylist. They’re usually off the wall. Totally unlike normal people.”

With the opening of Anthony’s new salon in Yorkville, this begs the question. Is the real superstar hair challenge the competition between their salons?

It doesn’t bother Gage that Anthony is opening a new salon on Avenue Road, which is relatively close to Gage’s hair palace. They have very different clientele, people who seek them out because of their individuality.

“The great thing about us — being on the show and being co-judges — is that we were different ages, different background,” says Gage. “We didn’t feel like competitors. In fact one of my clients lives right next door to Marc’s salon.”

Anthony agrees. "We will be closer and therefore we will see each other more often,” he says. “The exchange of ideas between years of wisdom combined with new innovative approaches will certainly help to enhance the future of the salon industry and take it to new heights.”