Drawn to Disney - Streets Of Toronto
Skip to content 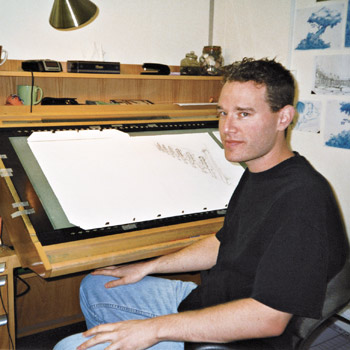 LOOKING BACK ON the span of his 20- year career in the animation business, Andrew Wolf pinpoints the moment he first felt successful. It was 1996, and he’d just been hired by Disney.

His first movie was Beauty and the Beast: The Enchanted Christmas, which featured the voices of Jerry Orbach (Law & Order), Haley Joel Osment (The Sixth Sense), and Paul Reubens (Pee-wee Herman).

Although he was nervous when he started, he soon settled in at Disney, and over the following decade, he worked on 16 other titles, including Return to Never Land, Bambi II, The Jungle Book 2, Tarzan and Jane, and Winnie the Pooh: A Valentine for You.

His role as the layout artist was similar to that of a cinematographer, he says. “We study and interpret the storyboard and set up the shot for all of the other departments. We decide on the camera angle, the staging of the characters, any and all camera moves as well as drawing the actual background,” the 42-year-old explains.

His passion for drawing started in childhood and led him to enrol in visual arts at Earl Haig Secondary School. Teacher Gary Low was among the first to encourage him to pursue animation as a career.

“He really knew what he was talking about. He was an accomplished artist who was very skilled,” says Wolf. “He had succeeded as an artist and told me that I could as well.”

Wolf attended Sheridan College, majoring in interpretive illustration. He started with Disney in 1996, when the company opened a Toronto studio, and worked with the company for three years.

When they shut down in 1999, he relocated Down Under, as the lead layout artist at Disney Australia. During that time most companies were shifting toward 3- D animation, but the Sydney branch remained one of the studios that stayed with 2-D animation. That unique arrangement attracted some of the world’s most talented artists in the field to the Sydney branch.

When the studio shut down in 2006, Wolf returned to Canada and began working at Corus Entertainment for the Nickelodeon show Wayside. Since then, he’s gone back to freelancing for various international studios, including some in Toronto, and on private commissions. He remains mum about a current personal project involving a series of illustrations, saying he’s in the works of a potential book deal.