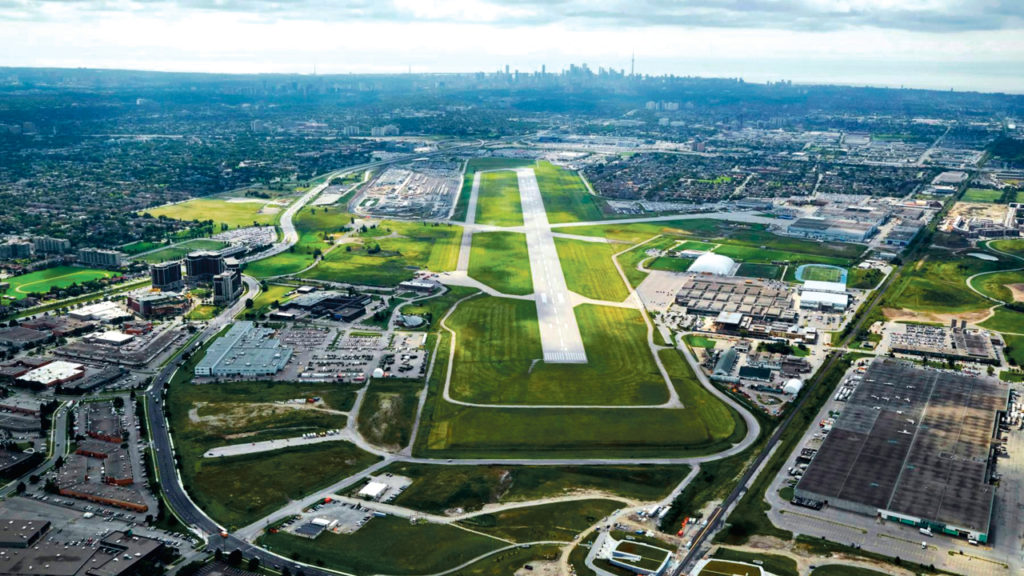 Local residents have gotten the first look at a potential entirely new community just east of Downsview Park that is shaping up to be one of North America’s largest development projects.

A framework plan for Downsview Parklands was released in early October, which shows how developers Northcrest and Canada Lands hope to build the project over the next 30 years.

Downsview Park is a large urban national park located in the Downsview neighbourhood near the intersection of Keele Street and Sheppard Avenue West.

The site was home to a Canadian Forces base and a former airport as well as an airport manufacturer.

The idea is to develop on the Bombardier airstrip, which will be vacated in about 18 months, in addition to federally held land in the adjacent area, totalling about 528 acres.

Local councillor James Pasternak said that it is likely the largest development project in North America, if not the western world.

“It’s very difficult to get your head around how large it is,” he said. “​It is truly daunting.”

The lands already have one of its first commercial deals — a $200 million movie studio investment, according to Pasternak.

“What we’re looking for is a development of the future, a transformative development where they’re building livable communities,” he said. “The risk is, if it’s not done properly, it’s just going to be a condo junkyard.”

Pastnernak noted that the densification of the area has to be held under control by the city of Toronto. The first step in making all of this possible has already been achieved, Pasternak said. The city has reached a settlement to rezone the area to mixed use in exchange for the 12 million square feet of employment lands and under the condition that a new community centre will be built.

Now, the next step is to change the area’s 20-year-old secondary plan to allow development on the land, which currently isn’t possible, according to Pasternak.

If it can be done properly, the new community would be well served by transit. It is at the nexus of three Toronto Transit Commission stations — Wilson, Sheppard West and Downsview Park — and is near main arterial roads such as Sheppard, Keele and Allen Road, not to mention Highway 401.

However, fatigue is already growing among residents toward the monster plan.

Local resident Patrick O’Neill is a part of the Downsview Lands Community Voice Association, and he said he has been on the file for about eight years. Over that time, his group has grown cynical over the plans, given its size and aspirations, where the residents’ voices can feel lost in all of the chatter.

“There’s no way you can make much sense of it,” O’Neill said. “There’s so many sides to it. It’s so huge.… It’s too much. It would take a lifetime to understand it.”

The residents’ group is mostly concerned about Downsview Park and hopes to build more access to it and gain the 100 acres, which was originally promised for the park when it was built, but it never materialized.

As for the plans east of the park, O’Neill said it is too early to give any input.

“It’s a waste of time to say what you would like because it has to undergo so many approvals from so many different sources,” he said. “There’s so many cooks in the kitchen.”