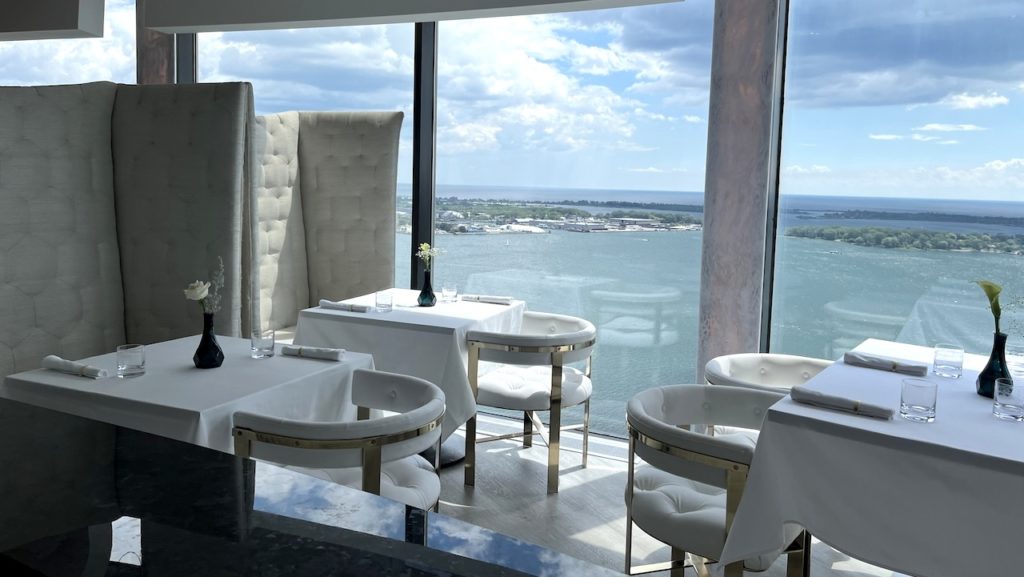 Toronto Italian restaurant Don Alfonso 1890 is officially back, having opened up its internationally-acclaimed restaurant inside the Westin Harbour Castle, complete with a stunning 360-view of the city and lake.

Nick Di Donato and the Liberty Entertainment Group team were looking for a permanent solution following a pop-up at Casa Loma. The team found it inside the iconic Westin Harbour Castle, in the space formerly occupied by the restaurant Toula, and it is quite the breathtaking space.

“Location and ambiance are critical to our success. We were very fortunate to find the 38th floor of the Westin Harbour Castle,” Di Donato says. “It’s a 360 view of the city and the lake. So it’s got spectacular views. It’s a beautiful space in terms of the bones that we have.”

For the new eatery, the team wanted the kitchen to stand out in the city’s restaurant scene while maintaining the same level of luxury guests have come to expect from Don Alfonso.

“We want to keep it consistent with the brand that people have become accustomed to in Toronto. So it’s a very contemporary style because it is a very contemporary cuisine style for Italian cuisine. So, you know, those elements will stay the same. Part of our design work at Liberty Entertainment Group is always to bring art into our restaurants. And the artwork that we’re bringing in is by Damien Hirst, who’s a renowned artist from abroad,” Di Donato says. They’ve also added jaw-dropping chandeliers that hang between rosette ceilings inside the space.

“And the interesting thing is we were able to take a space and really create a kitchen where people can actually walk through and see our culinary team in action. And I think it’s going to be one of the most extraordinary kitchens in the world because our kitchen is actually within the restaurant that has a view of the entire city.”

The new space, which just opened its doors and reservations to the public, accommodates 80 people, and the restaurant features the tasting menu that has won many awards in Italy and beyond. Reservations can be made via OpenTable.