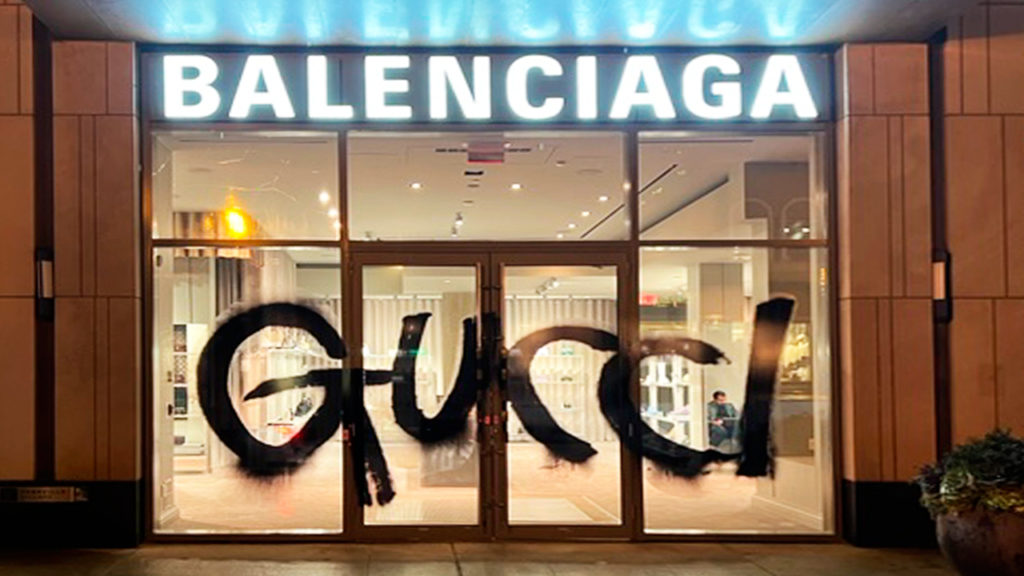 If you passed by the new Balenciaga store in Yorkville this week and thought a die-hard Gucci fan or graffiti artist with a sense of humour had visited recently, you’re not alone.

Stores across the continent were faux vandalized as part of a collaboration between Gucci and Balenciaga, and it’s so realistic-looking that it even had security guards patrolling Madison Ave. in New York City concerned.

The collab, cleverly named The Hacker Project, includes 74 activations in cities all over, including the new Balenciaga pop-up in Yorkville, open until Jan. 15.

If spray-painting entire storefronts seems a little elaborate, it’s for a reason – the collection, created by Balenciaga’s creative director Demna Gvasalia and Gucci’s Alessandro Michele, is supposed to explore ideas of “authenticity and appropriation,” including counterfeit culture, in the fashion industry.


The collection from the collaboration includes hybrid designs featuring iconic prints and silhouettes from both brands – such as a signature Gucci bag emblazoned with the Balenciaga logo over top.


Items from the collection are priced similar to equivalent items from each brand, so buyers who are lucky enough to get something from this limited edition collection can tell themselves they’re getting two for the price of one.

They say imitation is the sincerest form of flattery, so the Gucci and Balenciaga creative teams should be proud – according to Retail Insider, the graffiti added to the Yorkville pop-up was spray-painted over by a bona fide graffiti artist in pink just one day before the official opening on Monday, and it all had to be removed and redone.