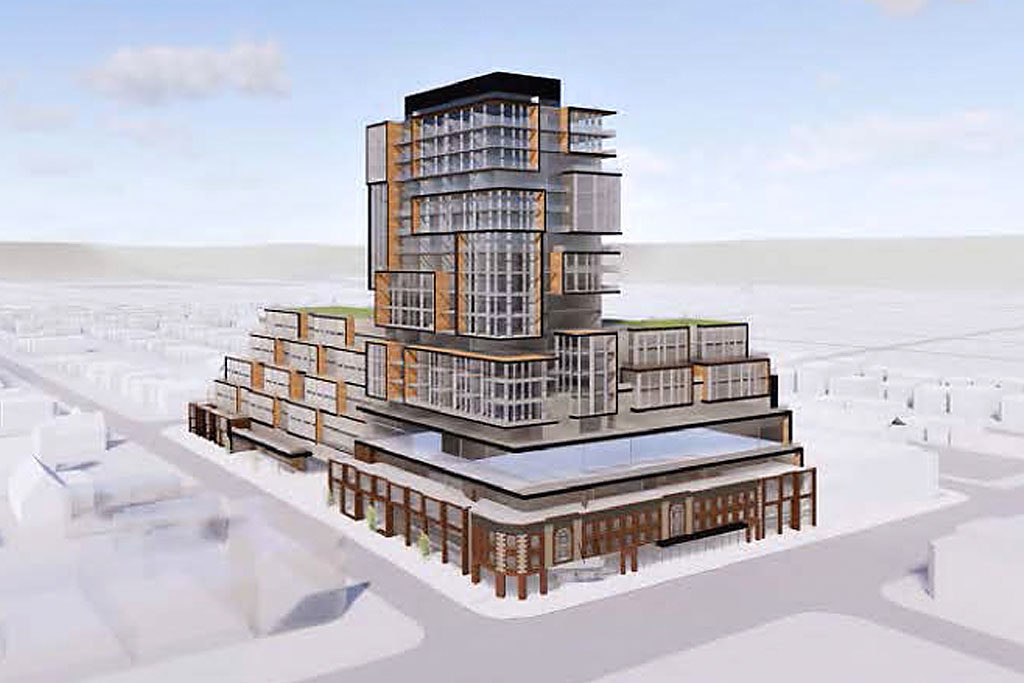 In the following days, and before any sale was finalized, the developer, under the name 2500 Yonge Street Ltd., submitted a mixed-use residential development plan including a highrise tower for the site.

The plan incorporates the city-owned parking lot at 20 Castlefield Ave.

“This is the second highest growth area outside of the downtown area, and we realize that there are significant deficiencies to support the level of development that we are seeing,” explained Al Rezoski, manager of City of Toronto Planning for Ward 16.

The significant deficiencies mentioned by Rezoski are not easy to overcome. By using land that could be utilized to deal with school and park shortages among other things, large-scale developments will be hard-pressed to get the support of the residents.

“We are seriously parkland deficient, and there will be more people moving in to the new buildings."

“We are seriously parkland deficient, and there will be more people moving in to the new buildings,” said Linda McCarthy, vice-president of the Lytton Park Residents’ Organization.

Schools, parks and transportation are just a few areas that need to be addressed if development is to continue at all.

Councillor Josh Matlow has attempted to address the fast pace growth in the area with the Midtown in Focus plan, which was scheduled to head to council for a vote at the end of July.

Although, he said the city doesn’t have the legal ability to put a freeze on development, he has included in the plan a list of sites where there are clear infrastructure deficiencies as well as a “motion to formally request that the province of Ontario allow for a freeze on development in this area until the necessary infrastructure and social services catch up with the pace of growth.”

The Green P parking lot in question is one of the largest surface area lots in midtown, lots that are being eyed for development as open land runs dry. That is when things get complicated.

The question is whether the parking lot should have been put up for sale at all.

According to the Midtown in Focus documentation, the land is designated as a city-owned opportunity site.

These are defined as “sites that provide opportunities to create new functional parks and open spaces.” In other words, it should be used to address the already established deficiencies in the area, not as part of a residential development deal.

“The intention is that it would be considered for parkland,” said Rezoski.

“We have this legal issue now: the developers are submitting an application saying that they had permission from the city to purchase that property. The situation is under legal review.”

On July 20, part of the confidential instruction to staff was made public: notice was to be given to the purchaser that the c​ity does not approve the sale between the Toronto Parking Authority and 2500 Yonge Street Ltd. (the agreement was dated Dec. 22, 2016).

The Yonge-Eglinton Secondary Plan will determine building heights and was set to be debated at council the week of July 24.

“[The recommendation will be] that the sites around the Capitol Theatre will allow for seven- to eight-storey buildings along Yonge Street and to the west. Within the neighbourhood designation, there will be a maximum of four storeys per building,” said Rezoski.

This is great news for McCarthy, who believes that the Capitol Theatre is crucial to the character of the neighbourhood as a whole.

“It needs to be maintained,” she said about the theatre. “We are not opposed to development, but if you are going to build around it, then it should reflect the character of that building.”

When the developer bought the Capitol Theatre block in 2015, meetings between the local councillor, the developer and local residents’ associations did take place to determine what could be built there. But according to McCarthy, those discussions abruptly ended.

“We have heard nothing at all since then, so we have just been waiting,” she said. “And this item pops up at council about the Green P parking lot on the agenda, and the very next day the developer submits the plans to the city for what they are proposing to build there.”

With the city’s decision on the development in limbo, residents have found other ways to fight against it. Rezoski points out that the hurdle for all future developments in Toronto is “the existing planning legislation [that] allows us to place an H [a hold on the application] on every development if there are any community facilities that need to be built as part of the development.”

C​ity council was scheduled to vote on the secondary plan revision at the end of July.