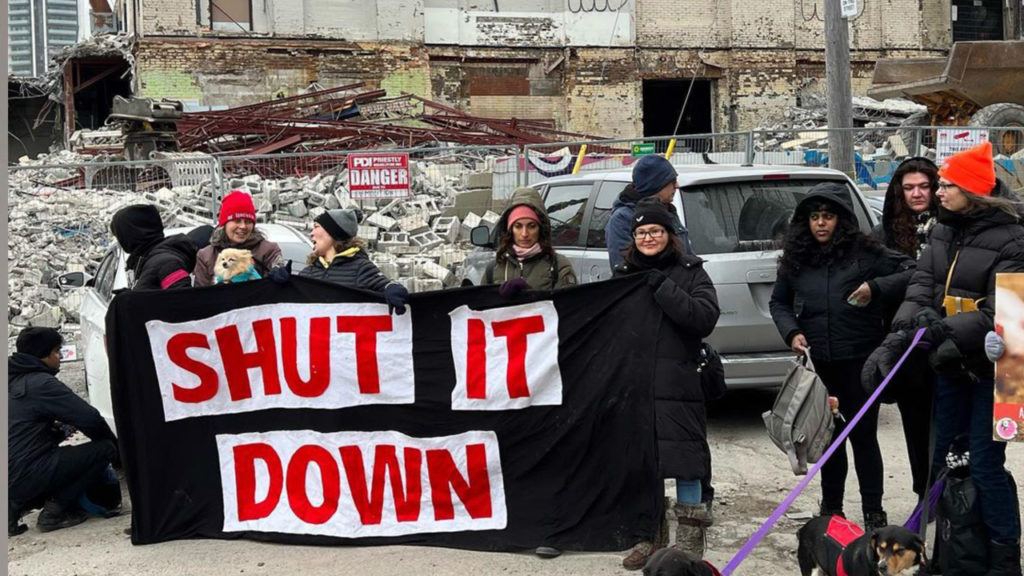 Over the years the slaughterhouse located at 2 Tecumseth St. in Toronto has had its share of bad press. From complaints about the “wretched” smell to PETA protests, the factory known then as Quality Meats was in operations for more than 80 years before finally going bankrupt in 2014.

Now, Animal activists from across North America are celebrating as news of the former slaughterhouse’s leveling is set to take place in a few weeks time to make way for a massive mixed-use development.


On Wednesday, animal activists joined Toronto Pig Save “to celebrate” the bulldozing of the former slaughterhouse.

From 2011 until 2013, the activist group held a minimum of three weekly vigils at Quality Meat Packers, “to bear witness to farmed animals transported to Toronto area slaughterhouses,” according to Toronto Pig Save’s website. The group now holds weekly Pig Save vigils at a slaughterhouse located in Burlington.

“Many people who joined us at the weekly vigils became vegan and animal activists and organizers,” said Anita Krajnc, co-founder of Toronto Pig Save.

The new community planned at 2 Tecumseth St. includes a mixed-use development that will span nearly 1 million square feet across five five architecturally distinct buildings including two towers, one mid-rise and two low-rise. According to developers TAS, it will also inlcude nearly 1.5 acres of public realm improvements and new parks as well as a four-meter-wide bike path.