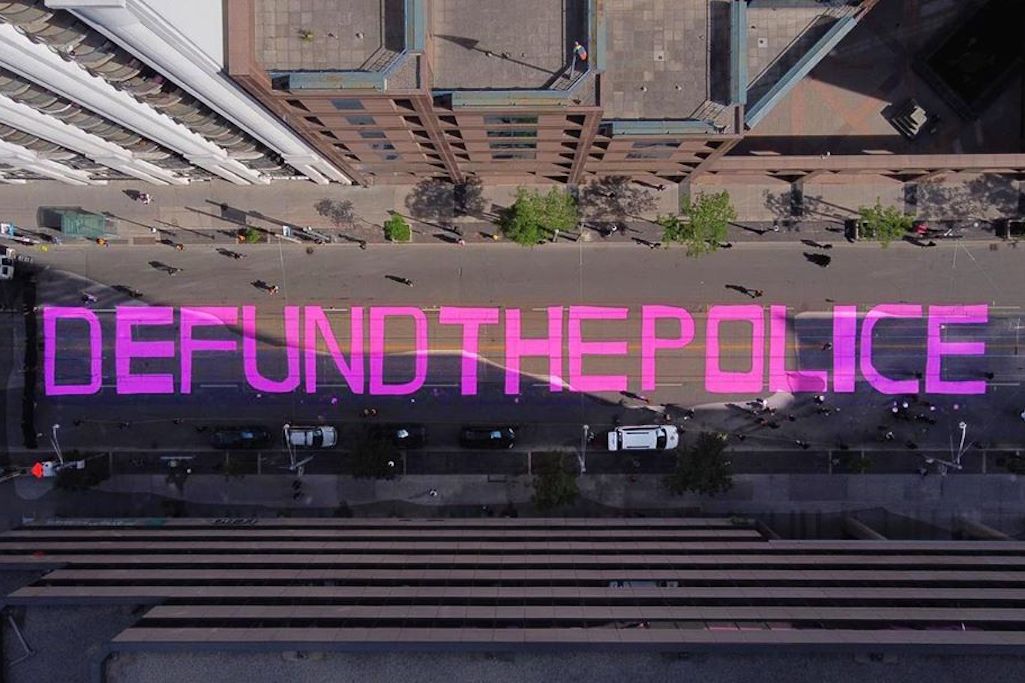 Protesters from across Toronto gathered in front of police headquarters on Friday, where the message “defund the police” has been painted in large pink letters. The massive demonstration includes a peaceful sit-in, followed by a march to city hall.

The event, planned and coordinated by Black Lives Matter Toronto (BLMTO) and Not Another Black Life, is calling for police reform and an end to anti-Black racism in Toronto and around the world.

BLMTO members are demanding a significant portion of the Toronto Police Service (TPS) budget be reinvested into Black, Indigenous, racialized, impoverished and other targeted communities. Syrus Marcus Ware of BLMTO shared some of their demands at the sit-in.

“Immediately we demand a redirect of a minimum of 50 per cent of the $1.1 billion TPS budget toward the communities that they have devastated. By investing in secure long-term housing for street-involved and unhoused communities, investing in food security programs, public transit, public health, public libraries and community-led anti-violence initiatives,” Ware said.

The group has put their vision for an anti-racist Toronto down in writing at defundthepolice.org.

Friday’s rally also commemorates Juneteenth, otherwise known as June 19, 1865, an important holiday in the United States that celebrates the liberation of Black individuals still enslaved at the end of the American Civil War.

The Toronto protest is just one of many that have taken place since the killing of George Floyd on May 25 in Minneapolis. Floyd was killed by an officer who had pinned him down and held a knee to his neck for nearly nine minutes. His death set off a chain reaction of protests and public outrage in the U.S. and around the world.

.@notanotherblk is holding space in front of toronto police hq (40 college street) until 6 PM to demand police abolition and the prioritizing of black safety and care. if you can come thru, bring a sign, bring chalk, bring your voice pic.twitter.com/dYRXdoYF4o

Before Friday’s event, the names of Black individuals victimized by police brutality were painted to surround the protest’s call to action. BLMTO members arrived early to tackle the task, as well as paint Xs on the pavement to facilitate safe social distancing during the sit-in.

Of course, Toronto is not the only city painting messages of solidarity with the Black Lives Matter movement on city streets. ‘Black Lives Matter’ was painted in large yellow letters in Washington D.C. just outside the White House in early June.

Toronto Mayor John Tory also released a statement supporting the recommendations as some positive “first steps,” but noted that more is needed.

“I am continuing to work with members of the Police Services Board and City Council to make sure we are doing everything we can to stop anti-Black racism and to dismantle systemic racism in our city,” the statement reads. “I fully support accelerating the pace of police reform in Toronto and I believe the recommendations going to the board this week will result in real tangible changes that will produce more accountable policing.”

The Toronto Police Services Board will be taking action this week to confront anti-Black racism. Please read my full statement here: pic.twitter.com/O5g4SC6Qwc

Other local councillors have also thrown their support behind the call to defund the police. Toronto city councillor Josh Matlow is currently working on a motion to cut the police budget by 10 per cent.

However, after receiving a significant amount of feedback, TPS has decided to host a public forum to take place on the week of July 6 to facilitate “broader public consultation on these important matters.”

In the meantime, people across Toronto are making their voices heard.

Friday June 19th! ABOLISH THE POLICE JUNTEENTH SIT IN! From 12-6pm beginning at College & Bay ending at City Hall. We are occupying Bay st for a peaceful sit in and celebration of Freedom & Liberation, with demands to defund the Toronto police to abolishing the police! (Full demands will be posted soon) Please bring food and water, sunscreen & energy! We will be practicing social distancing so bring a mask & IF YOU’RE SICK, STAY HOME! Information is in the post above & we will be posting general call outs for volunteers to help social distancing protocol & PPE distribution! BE READY! No justice, No peace! #notanotherblacklife #blacklivesmatter