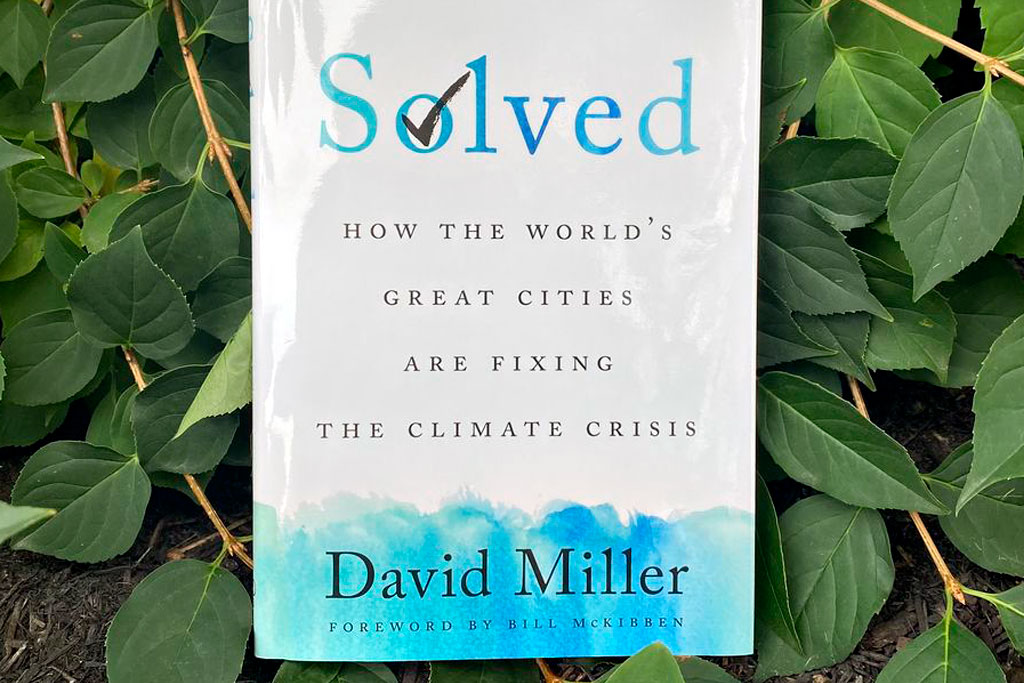 If you are feeling discouraged about how little is being done to combat climate change, David Miller’s new book is a real cheer-me-upper.

“At last, some good news about the future!” writes Bob McDonald of CBC’s Quirks & Quarks. “David Miller delivers the positive news of how cities are taking the lead to become energy efficient, low carbon emitters.”

The book is titled Solved: How the World’s Great Cities Are Fixing the Climate Crisis.

Miller, a former Toronto mayor, now holds a senior position at C40 Cities Climate Leadership Group, which brings together the mayors of the 100 largest cities in the world. He notes that 70 per cent of the world’s greenhouse gas emissions can be attributed to cities, mostly in four areas: generating electricity, heating and cooling buildings, transportation and solid waste.

Zero-emission power grids, buildings, transport and solid waste — all are feasible with existing technology, and all make economic sense.

Take New York’s most iconic structure, the Empire State Building. Its owners spent more than $100 million on energy retrofits — better windows, air and electricity systems, heating and cooling. It was a smart investment: energy costs went down, and profits went up as tenants were willing to pay more for a modern, energy-efficient building.

New York City requires that owners of buildings of more than 50,000 square feet must measure energy and water use annually and disclose the results. Tenants then start to demand changes, and the city has put in place tough renovation and retrofit standards. By 2015, buildings in New York emitted 18 per cent fewer emissions than 10 years earlier.

Toronto has never been given the power by the province to require building energy audits. But Toronto has taken action on its own to reduce emissions from large buildings. Fifteen years ago Toronto Hydro established deep water cooling, using water from the depths of Lake Ontario to cool most of the large downtown buildings, saving energy and money and reducing emissions.

It would be terrific if Toronto had the legislative power to follow New York’s lead. Everyone would benefit — landlords, tenants and, of course, the many people hired for the new jobs required to make the retrofits. Seems like a no-brainer.

Reducing emissions in transportation happens if taxis and buses are fueled by electricity. That is now the case in Shenzhen, China, a city of 13 million. All 16,000 buses are electric, and so are almost all of the 22,000 taxis. Subsidies from the Chinese government have helped make the transition.

In London, England, since 2018, new taxi licences are only given to vehicles that are zero-emission capable. Many cities are using surface rapid transit — Toronto has headed the other way thanks to Premier Ford’s hijacking of the subway system.

Many cities have to worry about coal-fired electricity production but not cities in Ontario: a decade ago then-premier Dalton McGuinty got rid of coal-fuelled electricity generation in Ontario.

Miller’s book is full of examples around the world — in Africa and Asia, too, not just in the developed West — about the progress that cities are making even when state governments are laggards at addressing climate change. Local politicians realize people want to live in cities with clean air and water, and they respond appropriately.

C40 came about with Toronto’s help. In 2004, Ken Livingston, then mayor of London, England, though not enough was being done about climate change so maybe the city government should step up. He and his staff turned to Toronto for advice. Toronto had hosted the Conference of Changing Atmosphere in 1988, and it had established the Toronto Atmospheric Fund. That consultation with Toronto was the start.

It’s good to see cities taking the lead as the so-called “more senior” governments flounder when it comes to climate change.