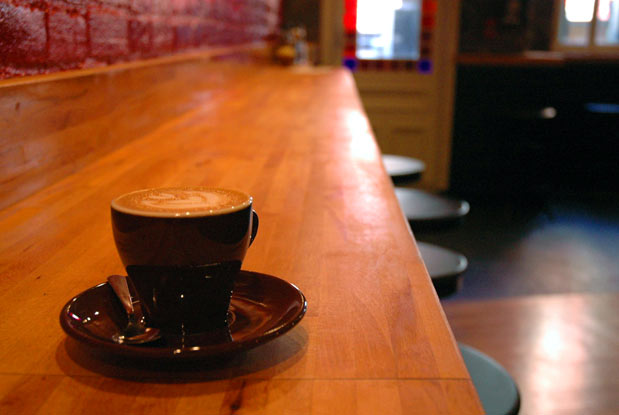 It’s no secret that Toronto is completely inundated with espresso bars, but at least two downtown areas have managed to avoid indie oversaturation: the Financial District and the Entertainment District. Sam James plans to tap into the former with an upcoming shop on the PATH, and Dark Horse Espresso Bar has ventured into the latter with a fourth location, which officially opened on John Street this morning.

Set in the space that formerly housed Smokeless Joe — which relocated to College Street last year — this incarnation of Dark Horse is smaller, seating around 15. Still, it’s a standard Dark Horse through and through, complete with lots of hardwood and pressed tin ceiling tiles. The menu and price points are right in line with the other locations.

Shots are pulled on a Kees van der Westen Mirage espresso machine, similar to the one used at Dark Horse’s original location on Queen Street. Pastries are provided by Circles and Squares, Desmond and Beatrice and other local purveyors.

A menu of paninis and soups is also in the works.