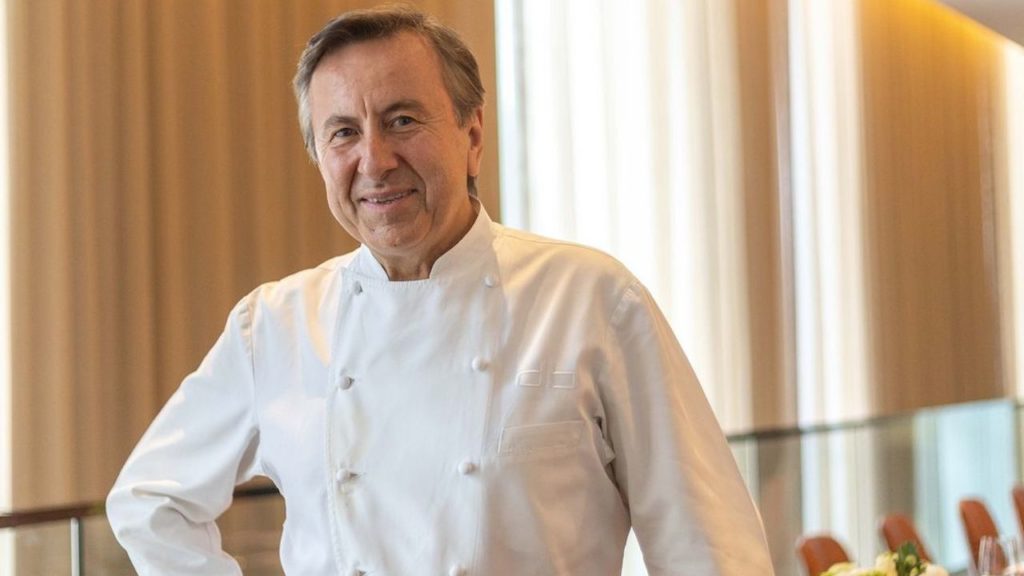 Chatting from his kitchen outside Lyon, France, chef Daniel Boulud, one of the most lauded chefs in the history of his profession, has a smile on his face when asked who does the cooking when his large family gathers around his table for a meal.

“I love the act of sharing with the ones you love,” he says serenely, as the sun shines through his big bay window where, in the background, there are rolling, golden fields. “There’s nothing quite like everyone sitting down together over a plate of something wonderful, so I generally get the task. I also don’t think anyone in the family wants to compete with me, that’s for sure.”

Daniel Boulud isn’t bragging, and he isn’t poking fun at his wife or the nearly 45 mouths he’ll feed later today from his firepit, where he loves grilling meat and fish and making vegetables on his wood-burning outdoor oven, beside his bocce pit. It’s more that the 67-year-old is semi-retired and enjoying the fruits of his longtime excellence in his profession, which includes not only the two-time Michelin-starred Daniel restaurant in New York, but eponymous outposts everywhere from Palm Beach to Dubai, from Singapore to Washington D.C.


On a recent Thursday night in Toronto, his Café Boulud in Yorkville, inside Yorkville Avenue’s Four Seasons Hotel, was an energetic room where patrons were devouring plates of lobster tagliatelle, rotisserie duck and warm madeleines. The restaurant, which is long and winding and warm, sits above the D-Bar, and Boulud says both restaurants will be doing something special this month for the Toronto International Film Festival.

“The energy of Toronto in September is unlike any place in the world,” he says, adding that unique local offerings to expect from him this month include oysters with caviar and crab stuffed with Canadian salmon.

Talking about the Michelin guide that is officially coming to Toronto, Boulud says, “I think the Michelin star is a huge step for Toronto and a sign the city is moving in the right direction.”

Boulud is sheepish about whether or not his own Toronto restaurant might be first up to win the prestigious award that he’s famous for. But he says the energy generated from the award’s arrival will inspire all of the local cooks. “I absolutely hope that one day we might earn the Michelin for Café Boulud—we might not be there yet, but every great food town has to have ambitions,” he says, then anoints the Toronto culinary scene as being on par with any place in the world.

“Toronto for a long time had to look south and look east — meaning they had to look to Europe, America and Asia for concepts, but it’s a testament to the young chefs who’ve worked so hard here for so long because now Toronto is where Americans and Europeans are looking to see what’s next,” he says.

In Toronto, Patrick Kriss — the owner of the highly praised Alo — got his start as a sous chef at New York’s Daniel restaurant, and Le Select (the buzziest new restaurant in town after it reopened this year following its closure in 2020) has Zachary Barnes in the kitchen, another local star who learned how to cook from Boulud.

“I’ve had so much great talent from Canada in my kitchens in New York, and I think of Carl Heinrich from Richmond Station and, of course, Patrick. I’m very proud of what he’s accomplished at Alo and think he’s tremendous,” says Boulud.

He adds that he remains excited by the cooking — and personality — of his friend Susur Lee.

“For 25 years Susur was the ambassador of Toronto and he still is,” Boulud says. “I love his energy and creativity and the videos are incredible that he makes with his son.”

The thought of chef Daniel Boulud watching Susur deconstruct Taco Bell on TikTok is startling, but Boulud says it’s important for restaurants to remain current, and he also wants to debunk the snooty fine dining air. Bouloud says he learned an important lesson during the pandemic, and that was to not take himself so seriously. There are financial goals at all of his restaurants, and supply chain issues and interest rates are impacting the bottom line of his business. Boulud is having trouble finding people to staff his global restaurants and says he’s feeling a burden unlike anything he’s felt before. But Boulud, reached at his farm outside Lyon, with a smile, says he feels gratitude. Cooking once did, and still does, stir his soul.

“I love what I do and think, if anything, that I learned to take a pause during COVID and reflect on how we operate as a business with compassion,” he says. “Compassion for our suppliers, our customers, our winemakers and foragers and for each other. We must do better for each other because there is no reward financially like the gift of serving something with love.”