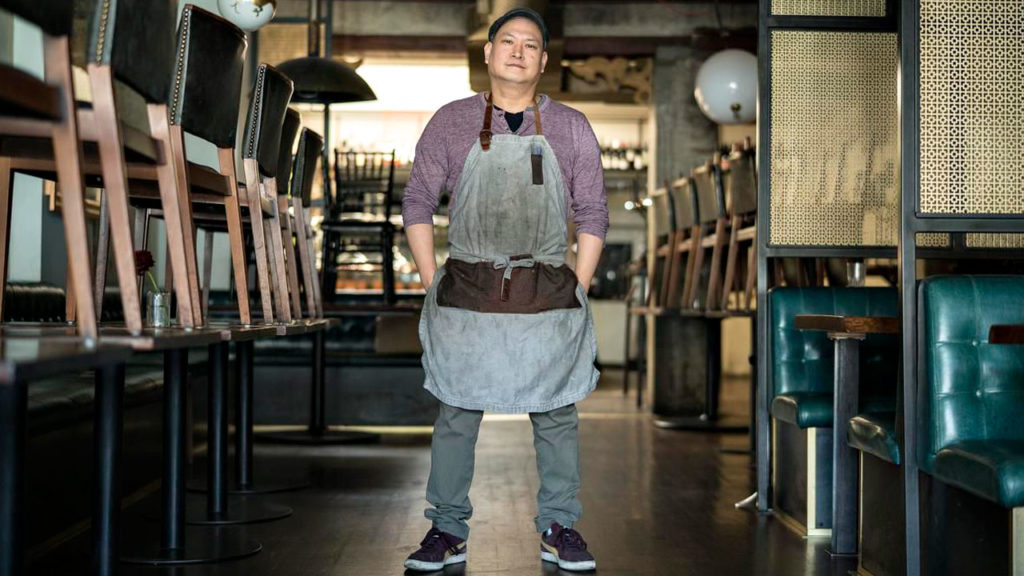 DaiLo sits beside Bar Raval and, along with its owner, Grant van Gameren, chef Nick Liu has transformed west College Street into one of Toronto’s hippest restaurant dining blocks. Liu, 46, has been cooking since attending George Brown College in 1996 and learned his craft at Michelin-starred restaurants like the Fat Duck and also at Niagara Street Cafe, where the food grew to resemble its chef more than the original restaurant concept.

Liu, young and audacious, counted among his peer group rising transformative kitchen stars like Matty Matheson and Scott Vivian, the chef behind Beast, and saw his frenemies open their own spots while he was slower to connect the dots — financing, location, partners — for doing his own thing in the kitchen. The slow burn proved to be beneficial.

“My story reads now like a fantasy, but it’s something I call the ‘beautiful struggle’ and it took a lot of perseverance and resilience — took me sleeping in my car for two days — to open my restaurant,” Liu says over hakka brown wontons and Filipino BBQ pork belly and octopus tacos at DaiLo, where photographs of his parents and grandparents dot the exposed white brick back wall.

DaiLo translates, roughly, to “a nod to the ways and tastes of older cultures and generations,” and Liu, who had opened buzzy pop-ups around town between Niagara Street and now, didn’t find real success until he leaned in on his culture.

He says he thought “good cooking” meant “French cooking” and trained with the best, including Keith Froggett at Scaramouche. But when Liu awakened to the fact that exceptional flavour wasn’t regionally specific and could actually be found in his own home — that the Asian cuisine he grew up with was just as important as the Michelin stars — he found the keys to unlock his happiness, and international success.

“It took me a long time to register that the food I was brought up with was a substantial, meaningful form of cuisine, and I didn’t realize, growing up, I was being raised by so many good cooks with so much good food,” says Liu, who was born in Scarborough and raised in Markham at a time when the town north of the city was all hockey rinks and farmland.

“When we moved to Markham, it was the first time I realized I was an Asian kid. In Scarborough, everyone is just kids and does kid things, but when I moved to Markham as a teenager, it was the first time anyone identified me as a Chinese kid: ‘Nick Liu, do you speak English?’ When you’re younger you want to fit in, and I put my Asian culture aside for a long time, even when I started cooking. I wanted to cook the best French cuisine.”

At DaiLo, Liu cooks the best French cuisine while also incorporating the exact recipes that his parents and grandparents made in his youth. He still has his parents make the hakka brown wontons and serves his restaurant’s most popular dish in a bowl, much like how he ate it when he was five years old. The restaurant, celebrating its eighth anniversary on Aug. 8 — triple eights, which means good luck in Korean culture — has not only gone a long way toward cementing what Toronto cooking tastes like, cutting-edge multiculturalism, but also has influenced a gaggle of rising young Asian stars. As Susur Lee influenced Nick Liu, Nick Liu influences up-and-comers like Colin Li at Hong Shing.

“Seeing what Nick has done has been amazing for me and helped encourage me to try new things while leaning in on my culture but also incorporating my own personality to my food,” says Li, who recently revitalized his menu at his Dundas Street restaurant and fosters a community between his fellow Chinatown restaurateurs.

“It used to be that if someone put pork fried rice on their menu for $8, the other guy would charge $7, and it was a race to the bottom. Now, I feel like it’s more about pushing each other to try new things and a concerted, group effort for us all to reach for the top and, like DaiLo, create something fresh,” says Li.

Words like that, for Nick Liu, mean everything. Liu says his community of Asian chefs has always had to help each other and that kind words from his peers mean more than any critical accolade. Toronto cuisine is continuously being modernized and expanded upon, and with each successful restaurant like DaiLo that transforms a stretch like west College Street, the future of our food gets more exciting.

“It’s not all white kids working in restaurants. It’s Indians, Cambodians, Filipinos, and all across the board, all these ethnic people are starting to believe in the validity of their own cuisines,” says Liu. “It took a lot of hard work to get where I am, and maybe it took me a lot longer than it did some of my peers, but I feel proud of my contribution to Toronto cuisine. All I want is our city’s ethnic chefs to put their story on a plate. That’s where we find something special.”