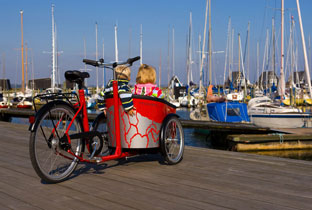 Where some Torontonians see a frame and two wheels, Jeff Scullion sees personality. Which is why he’s opening CycleCouture, his salute to the high culture of urban cycling. "In Europe, in Asia, biking is incorporated into everyday life … it’s part of your personality, the transportation you use," he says. "I’m really trying to bring this to Toronto."

The College and Ossington bike shop will open its doors on Friday, April 1, offering a variety of sleek and sophisticated commuter-type rides, including bikes from two of Copenhagen’s hottest designers — Velorbis and Herskind + Herskind. "These bikes are exactly designed to stand up to salt, to sleet, to snow," he says. "Their gearing is internal, the brakes are all internal, everything about the bike is built to stand up to the climate."

Scullion says CycleCouture will feel more like a gallery space, with select bikes, such as some of Velorbis’ vintage models, featured on the wall. "It’s going to have an uncluttered, minimalist look," he says.

In addition to pedal bikes, the shop will carry electric bikes, which will cost between $3,000 and $4,000. Scullion says he’ll also have the items that help make up an urbanite’s bike personality, including customized baskets, luggage carriers and messenger bags. Finally, he says he’ll be on hand himself, ready and willing to take on bike repairs.