A Q&A with North York General's Dr. Phil Shin on the third wave of COVID, and what happens next - Streets Of Toronto
Skip to content 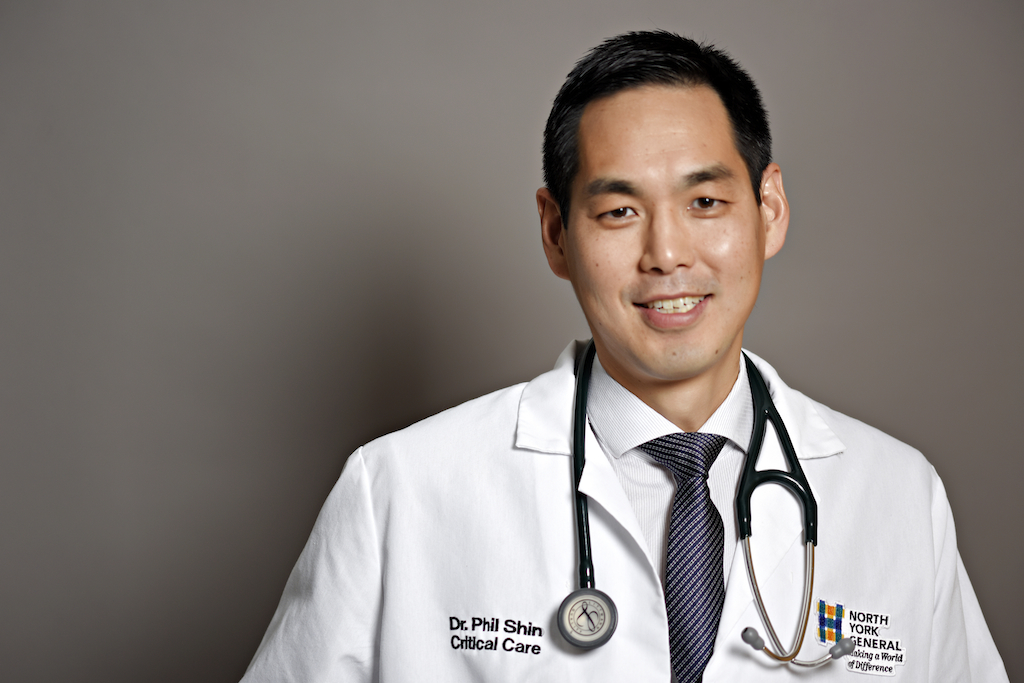 Dr. Phil Shin is the Chief of Medicine and Medical Director of Critical Care at North York General Hospital. With the third wave of COVID-19 rapidly escalating in Ontario and the vaccine rollout scrambling to get back on track, we decided to check in with Dr. Shin to ask him about what he is seeing in the ICU and what happens next.

It sounds as though it is chaos in the ICU these days. Is that accurate?

I wouldn’t quite call it chaotic. I think that it’s really hard for the public to gauge how much activity is occurring within hospitals based on news reports, but the numbers are now higher than 500 patients in Ontario ICUs and we have had more than 50 admissions in the last 24 hours. And I think four in 10 people on life support in Ontario are on ventilators because of COVID. Those are really remarkable statistics. And I think it certainly makes many of us anxious about where things are going to peak. Resources are, for sure, strained, and at this point over a year in people are understandably tired, and I know that’s for the entire population, and for sure for healthcare workers. And I know that in the last 24 hours, the province has decided to not only just open up some beds at SickKids, but actually move some patients there. So there’s a lot of movement and activity. I do think that there are still processes that we prepared for that we’re still implementing. So I think chaos may not be the best word but you know, certainly a flurry of activity.

Explain from your point of view the new variants — the difference in patient care and how rapidly it escalates?

In some ways, I think the variants aren’t a surprise because we knew this virus is going to mutate over time. It’s an RNA virus and we knew that Coronaviruses do mutate. I think it does for sure seem at this point to be more transmissible number one. And number two, the people coming into the hospital are younger. And number three, from an ICU standpoint, they’re more likely to get sicker to the point that they’re needing ICU care. I don’t think it changes fundamentally any of the treatments that we’re giving them. We’re still giving them the same treatment in the hospital. I do think it’s true though, that some of the younger patients are progressing to severe disease so that more of them are needing to go on heart lung machines, which puts strain on the tertiary care hospitals.

Is there a shortage on a type of medicine being used in COVID-19 treatment?

There are a few treatments that have become standard of care. Dexamethasone, which is a steroid, is not in short supply. It is an immunosuppressant, anti-inflammatory that is given to almost all patients in hospital. The specific medication that you may have heard concerns about is something called tocilizumab, which is a monoclonal antibody that acts on the body’s immune response to infection. And over the last week, it has been more difficult to obtain access to medication. In fact, as of today, we have had to adjust the dose we are giving patients in order to preserve supply as much as possible. I know that there’s a real concern that we may not have enough doses in the days ahead.

How is non-COVID patient care being impacted right now?

Until this week, we have only had minor reductions in non-COVID care such as surgery over the past month at our hospital. Unfortunately, all Ontario hospitals have been directed to ramp down all elective surgeries and non-urgent non-COVID case as of this Monday. This development is terribly unfortunate, but we now need to redeploy staff, and also use most of our in-patient beds for COVID patients who are being admitted to hospital.

On a personal level, would you recommend any changes to what we’ve been doing with masks, distancing etc.?

I’m not sure I would recommend anything different. I think it’s totally understandable that after a year of this pandemic, people are likely somewhat tired of hearing the same messages and trying to adhere to the same practices. And then to see us in a third wave again, I think these messages have less effect over time. I think this stay at home order is a drastic measure. At the same time, it’s really hard to know what other options we have when hospitals are really at risk of being overcome with COVID volumes in the coming weeks. The main messages remain the same: to try to socially distance as much as possible, to avoid unnecessary contact. I know it’s terrible for children and elderly, especially. But I don’t think that there is really much other choice, at least over the next month.

Now that the vaccine rollout seems to have really escalated in the last couple of days, what’s your gauge in terms of how fast that might impact the numbers?

I think things will get worse before they get better over the next four to six weeks. At the same time, if we are able to continue with this increased vaccine rollouts I’d be hopeful that by that point in time, we start to see some improvement. We can look to countries like Israel, for example, that is vaccinating more than half their population and over about a two-month period. They have had a dramatic reduction in cases, hospitalizations and deaths. I think it’s important for people to remember that the development and deployment of this vaccine within less than a year is a remarkable medical and scientific achievement. And these vaccines are remarkably effective. And I do think it’s the light at the end of the tunnel for the city and the province.

Lastly, how’s everyone holding up in the ICU? It must be immensely difficult for those healthcare workers and for you.

Certainly I have a few thoughts about that. I’m also sensitive to the fact that this pandemic is really wreaking havoc on everyone, not just healthcare workers. I see families and children that I know suffering from mental illness, small businesses really struggling. And so certainly, I don’t think that the focus should only be on healthcare workers. At the same time, I work alongside people every day who are emotionally exhausted, and they’ve had really not that much control over their work environment with so many challenges over the last 13 months. It is difficult, and I know people have heard that quite often over the past year. But I am hopeful that we will get a break in the next couple of months because I think everyone in healthcare needs it.