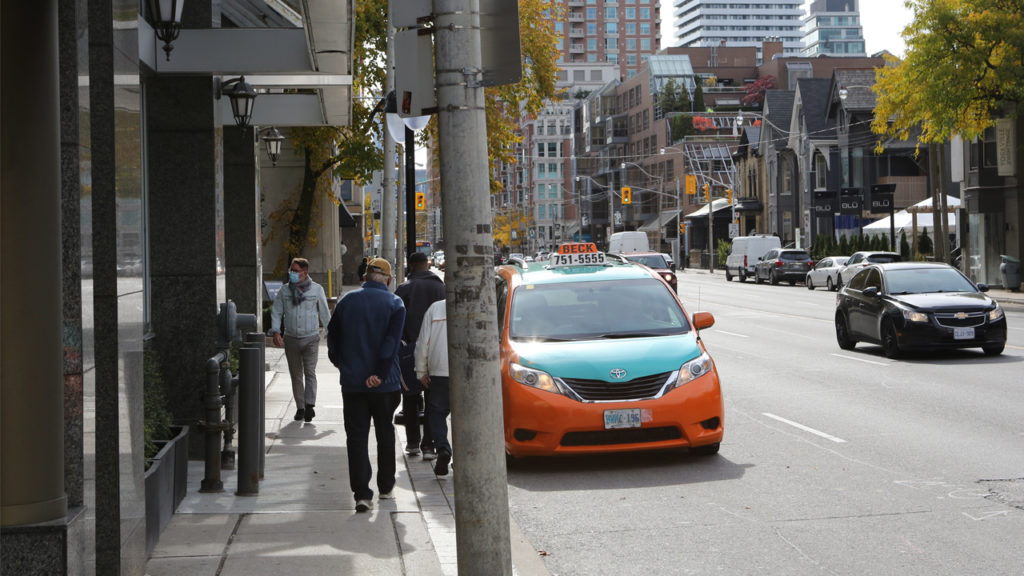 A stretch of Avenue Road in downtown Toronto could see some changes in the near future to improve pedestrian safety, but is it moving fast enough?

The city is currently undertaking a study of Avenue Road between Bloor Street West and St. Clair Avenue West to determine if any changes should be made. The road currently holds six lanes of traffic and its sidewalks are narrow in parts, below the standard width of 2.1 metres.

This has posed safety issues for pedestrians and cyclists. Last year, a teenager died on his bike from a collision at Cumberland and Avenue, adding to a growing list of collisions in the area due to cars.

“Avenue Road is a very hostile roadway,” said Arlene Desjardin, the co-chair of the Avenue Road Safety Coalition (ARSC), a group advocating for better safety in the area. “The cars are just driving too fast.”

The city found in 2017 that about 85 per cent of the vehicles on the 2.1 km stretch of Avenue Road routinely travelled above the 50 km/hour speed limit. This has resulted in cars sometimes losing control and mounting the sidewalk, according to Desjardin.

Since that study, though, little action has been done to improve the road’s safety, according to Desjardin, despite a vote by city council in October 2021 to make “immediate safety improvements.”

“There have been no immediate safety improvements on Avenue Road,” Desjardins said.

Instead, the city has opted to continue studying what could be done. Options to improve safety include widening the sidewalks, reducing the number of lanes of traffic, adding bike lanes or lowering the speed limit. As part of its process, the city opened an online survey to the public that ended in late May, and will hold a public meeting in July.

Despite the lack of action, making changes to Avenue Road is very much in mind for local councillor Mike Layton, who recognizes that up to 10 new developments in the area will add even more pedestrians and make change more necessary.

“We don’t have the sidewalks to hold the people,” he said. “More and more people walk that neighbourhood and more and more are getting forced out into traffic. That’s a dangerous situation to be in.”

He’s split though on what to do. ARSC provided a vision in 2021, along with Brown + Storey Architects, that would drastically change the area in favour of pedestrians, increasing the sidewalks by 240 per cent, adding 580 new trees and reducing the street to four lanes of traffic.

Layton said the mockups are a “visionary guide” for what could be possible, but noted that it would be difficult to achieve due to the need to move hydro infrastructure such as stormwater drains. The city plans to do a major reconstruction of Avenue Road in about 10 years that could include permanently widening the sidewalks but hopes to implement short-term changes in the meantime to address the safety concerns.

The plans come as the city has received some criticism on traffic mobility after the reinstatement of pandemic programs such as CafeTO and ActiveTO that allow more street life but also impede traffic movement. Blue Jays president Mark Shapiro recently wrote a letter to city council calling on it to scrap the ActiveTO program that closes down major roadways, such as Lake Shore Boulevard, at times to allow pedestrian and cyclist use.

Shapiro said the closures discourage those in Toronto’s peripheries from attending baseball games. Looking around the city, it is not uncommon to see cars backed up for kilometres.

Layton, though, says that car-friendly infrastructure can’t be “sacrosanct” and never be touched. To him, nothing will change if cars are prioritized instead of people, and so the city needs to continue to offer options to “entice” drivers away from their cars, such as better transit or bike lanes. If you build it, they will come, it seems — or could it be that they have no choice?

“We need to grow and evolve,” Layton said. “Do we have to wait until somebody dies?”