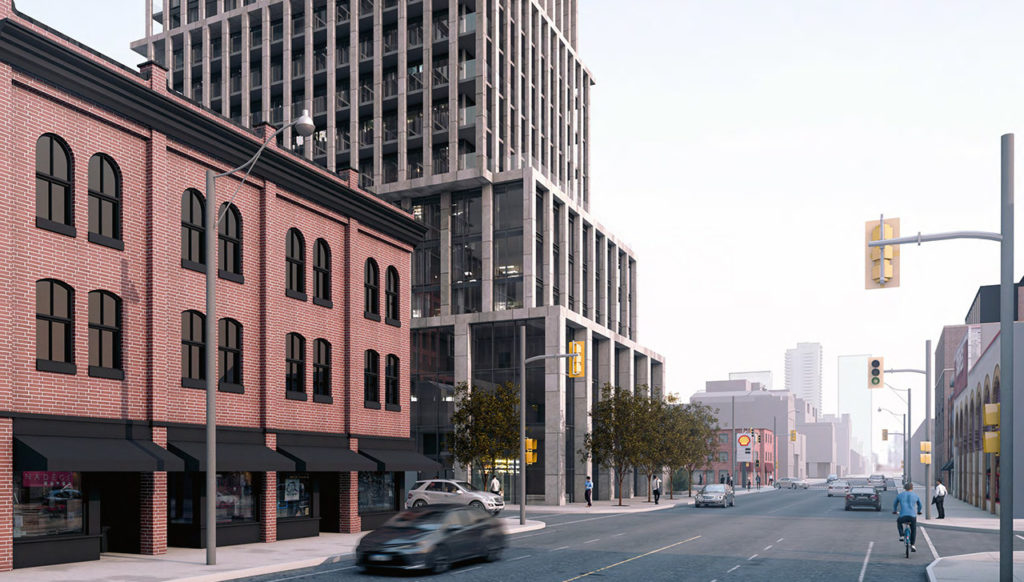 A 19-storey mixed-use building is being proposed for the Rosedale neighbourhood on Yonge Street, potentially adding another large building to the area.

The proposal for 1087 Yonge St. from Zinc Developments, designed by architects-Alliance, calls for a six-storey base and a 13-storey tower on top of it holding 143 residential units. The units would be comprised of ​​six studios (four per cent), 89 one-bedrooms (62 per cent), 32 two-bedrooms (22 per cent), and 16 three-bedrooms (11 per cent).

The site at Yonge and Price streets is currently home to a single-storey Sleep Country shop and a Running Room, as well as a three-storey mixed-use building behind.

Local councillor Mike Layton said the proposal is a bit more aggressive than city staff would want but there is talk to move an adjacent Green P parking lot to underneath the building, opening up the surface lot for a new park that would be a significant size.

“That’s a pretty good outcome,” he said. “Not to say the height is correct.”

Nevertheless, Layton said a tall mid-rise was instep with how the city expects the area to grow. A 10-storey building is in the works across the street at 1140 Yonge St., and a 21-storey building called The James at Scrivener Square a little north has already been approved, which means three corners of the intersection will be under constructed or newly constructed in the next three to four years, Layton said.

ABC Residents Association co-president Ian Carmichael said that the proposal at 1087 Yonge St. is beyond what current planning policies envisioned, voicing concern the view corridor up the street of the clock tower may be impacted.

The James, in comparison, is set back from Yonge St. to protect that view corridor in Rosedale, while initial mock up images of the Sleep Country site don’t show much of a set back, which Carmichael said planning policies hope to avoid.

“At first glance, this development is certainly far in excess of what we would expect,” he said, noting that the building height allowed in the current policy framework is about 20 metres, while this proposal calls for over 66 metres.

A preliminary report of the proposal will be presented to community council as the next step for the development.