Comic Stripped: T.O. comedian Tim Steeves and the return of the comedy album - Streets Of Toronto
Skip to content 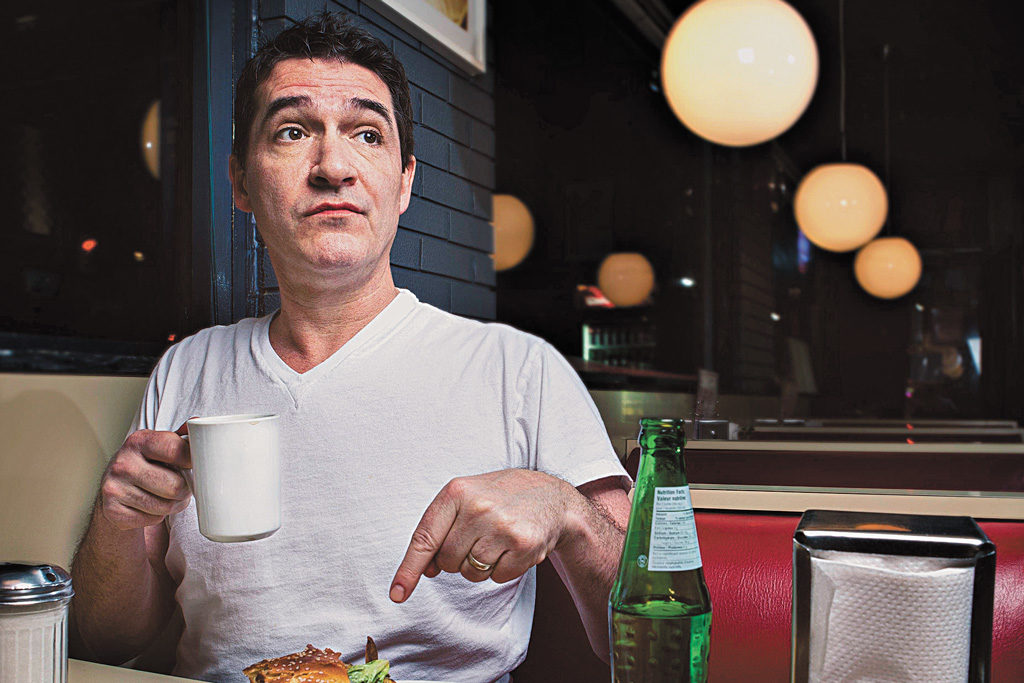 I’m in my rec room surrounded by bowls of stale potato chips, pretzels and maybe a taboo beer or two, but most importantly, I have four or five friends lounging around on the ugly sofas that have migrated from the family living room.

This is my teenage memory, and maybe it’s yours, too.

We are riffling through a small stack of comedy records deciding which one to listen to first: Cheech and Chong? George Carlin? Bill Cosby? My dad’s forbidden Lenny Bruce album? I make the call: National Lampoon’s Lemmings, the one with the great Belushi impression of Joe Cocker.

It’s impossible to overstate how important comedy records were back then. They were the only way to hear a full uncensored act. Sure, you could watch snippets of comedians on The Tonight Show or Ed Sullivan, but if you wanted the genuine article, records were the way to go. In 1960, Bob Newhart had the first comedy album to hit number one on the Billboard charts, and after that, everyone started recording them.
This continued through the early ’80s with Steven Wright and Steve Martin getting huge advances from record companies. The gold rush only halted when cable TV started broadcasting uncensored hours of standup. The boom was over. Video killed the recording star.

But over the last five years, there’s been a resurgence of the comedy albums, thanks mostly to the Internet. The albums are mostly digital, but it now seems every comic has a 60-minute audio set for purchase and download.

The technology has made this possible. You can record great quality audio with a tiny recorder and a few mikes.

This was on my mind when I went to a CD launch party a few weeks ago at the Rivoli for my old friend Tim Steeves.

Steeves is one of those comics who isn’t a household name, but should be. A Maritimer living in Toronto, he has been a headliner since the ’80s, with a gunfire delivery and a simmering anger about injustices big and small.

Steeves may not be a known name, but his extensive resumé speaks for itself. He’s done four galas at Just For Laughs, had his own CTV special, hosted two talk/sports shows on Global TV and has been one of the longest running writers on both The Rick Mercer Report and This Hour Has 22 Minutes.
So, why release an album now?

“I noticed that everyone who has five minutes on a Tuesday night open mike seems to have an album, so when Ben Miner of SiriusXM told me he had nothing of mine to play, I figured it was overdue.”
The title of the album, American Portions, is significant for Steeves.

“It’s a metaphor for the circuslike atmosphere of what’s happening down there right now,” he says.
If there’s a theme on the album, it’s a befuddlement at our age of excess and the frustrations of living a “modern” life.

“I like the stuff I chose to put on it because it’s a good blend of my classic bits and some really up-to-the-moment material,” says Steeves.

Unfortunately, in our digital age, most listeners will hear this album alone at their computer. Communal enjoyment is rare, if it exists at all.

I miss that old rec room — and the potato chips.