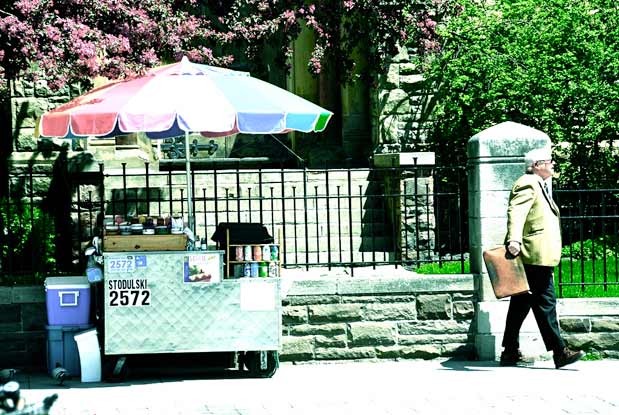 An appeal from six street food vendors who are being forced to relocate due to construction projects along Front Street has been turned down. Last year, city staff raised concerns over the locations of several street vendors — specifically the ones that sold food in front of Union Station — and their impact on construction in the area. The six vendors were then told to vacate, and city council made it official yesterday by denying their appeal.

The vendors still have their licenses intact, but now must find a suitable location within the city and submit a permit application before they can sell their next hot dog.

“It’s going to be hard to find another location in the city,” said a saddened Kathy Catsiliras, a family member of one of the affected vendors. “Tell me where can you find space on the pavement to set up a food cart?”

Within the GTA, food cart owners are allowed to apply for new street vending permits in most districts except for downtown (wards 20, 27 and 28) due to a 2002 moratorium. But during yesterday’s public meeting at City Hall, Ward 28 councillor Pam McConnell took the vendors aside — along with Street Food Vendors Association (SFVA) representative Marianne Moroney — and offered the vendors a concession: they can apply for permits in the areas affected by the moratorium.

Still, Moroney sees the decision to shut down more street food vendors as a blow to any sort of street food push.

“They put the moratorium in place to strangle the vendors. And, look, it’s happened,” Moroney said. “But now they have an opportunity to seek permits within the moratorium. What are the chances? Slim. Is it good enough? No. But, it’s something and it’s better than what the city initially proposed.”

The projected pedestrian traffic outside Union Station is expected to double in the next 10-15 years.

“There will be a need for more, not less, available street food,” she said.

One thing is for sure: Toronto loves its street food. Anyone who’s experienced one of the hugely popular Food Truck Eats events needs no further proof of that.

There’s reason for hope, though. According to Moroney, the Downtown Yonge BIA is looking to partner up with the SFVA and Ryerson’s urban planning department to build a street vending community in their district.

“Toronto hot dogs and sausages are iconic,” she says. “So much so that Toronto Tourism supplied 50,000 Toronto maps with the Street Food Vendors Association logo printed next to theirs — not Pepsi or Tim Hortons, but hot dogs.”

“The current appetite for more street food vending in Toronto clearly indicates a need to build in the infrastructure now for the opportunity of allowing the street food industry to flourish, not die.”