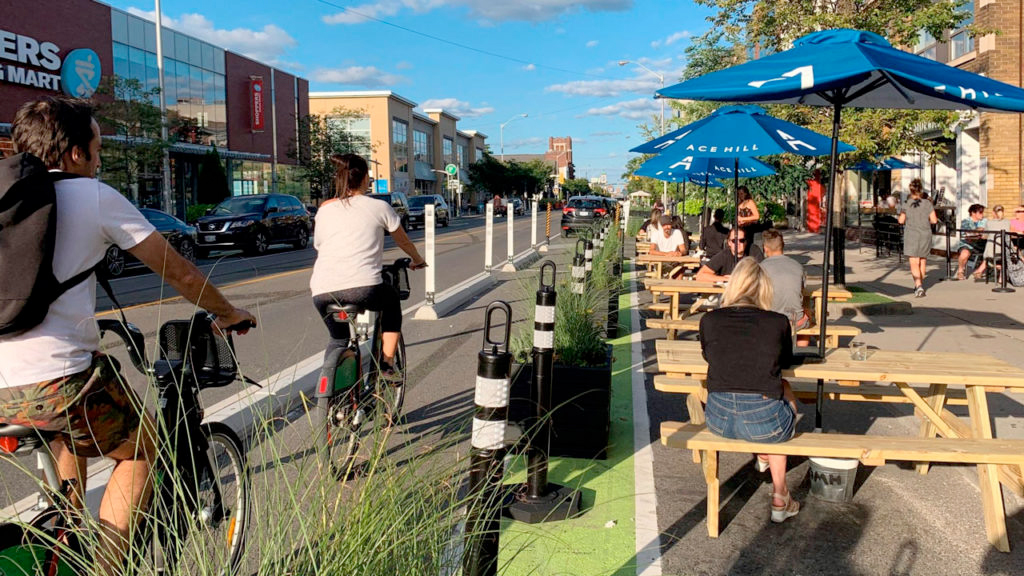 Ahead of a scheduled meeting of Toronto’s environment and infrastructure committee, a city report is recommending that two temporary separated bike lane pilot projects be made permanent on Yonge Street as well as Bayview Avenue. The meeting is scheduled for Jan. 30 and if approved the project will move to city council for a final vote in February.

The ActiveTO Yonge Street Cycling Network Expansion project installed separated bike lanes on both sides of Yonge from Bloor to Davisville, while the Bayview project runs from River Street to Front Street.

On Yonge Street, the bike lanes were part of a “complete street” project that also saw the installation of a number of CafeTO patios on the curb-side traffic lane.

According to the city report, cycling and pedestrian traffic is up.

“After 18 months of installation, the data demonstrates increases (ranging between 57 percent and 250 percent) in cycling trips and increases in pedestrian trips (ranging between 59 percent and 145 percent) on the corridor, as well as support for local business including an increase from 10 CaféTO patios in 2020 to 21 patios on the corridor in 2022,” the report read.

Two groups have staked out opposite sides of the issue with Yonge4All collecting nearly 7,000 signatures supporting the project and another with nearly 6,000 signatures asking for the removal of the bike lanes.

One of the signatories on the Yonge4All petition in support of the project is the newly elected city councillor for the area, Diane Saxe.

Saxe is the former environmental commissioner of Ontario.

“I do think that having protected bike lanes on Yonge Street is a very important part of the city’s transportation transformation. At the same time, there have obviously been some issues,” Saxe explained, in a prior interview. “And one of them is the interaction between CaféTO and the bike lanes. And that, I understand, is going to be somewhat different next year, that we have a report coming to council proposing revisions to the CaféTO program.”

Saxe did add that there are a number of competing priorities on Yonge Street and a balance must be achieved.

One residents’ associations that comprises the largest percentage of public space in the project area, ABCRA, wrote a letter in support of the project dated Jan. 3.

In it, they suggest additional steps be taken by the city upon approval of the project to help mitigate the impacts from traffic cutting through local streets such as speed bumps. In addition, ABCRA would like to see enhanced and attractive public spaces and an increased focus on environmental sustainability “by enhancing the tree canopy and landscaping, reducing urban heat island effects, reducing stormwater runoff, reducing energy consumption, and reducing greenhouse gas emissions.”

If the project is made permanent, the city outlined next steps in improving the design of the bike lanes.

“It would provide the opportunity to transform temporary curb extensions and buffers into permanent planted and/or concrete islands, incorporate upgrades into redevelopment site streetscape frontages, and incorporate other upgrades as part of major road resurfacing planned in upcoming years,” the report read.