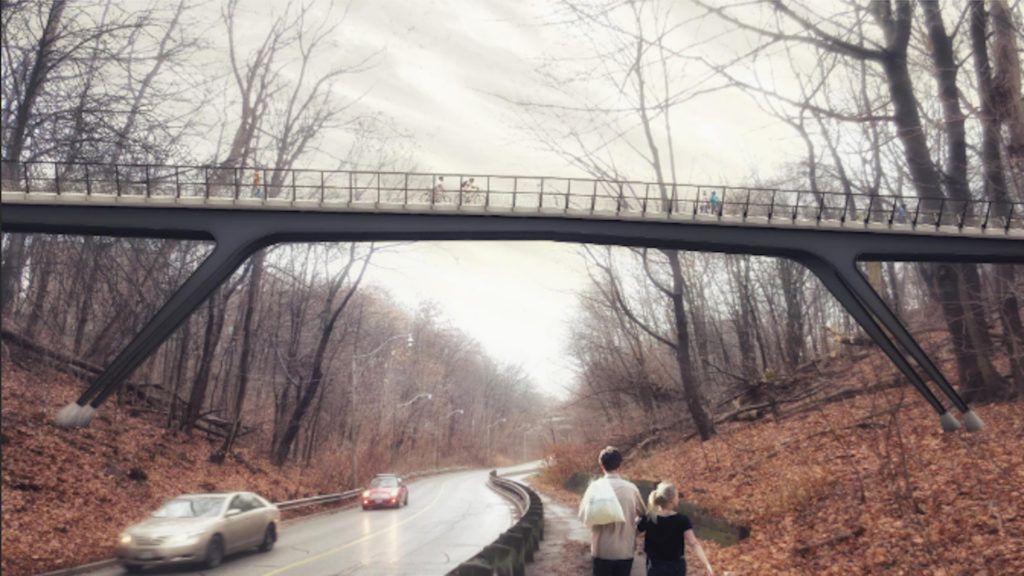 Set to begin in the spring, the city is moving forward with plans to reconstruct the Glen Road Pedestrian Bridge that runs across the Rosedale Valley Ravine, and the pedestrian tunnel under Bloor Street East that connects the neighbourhoods of Rosedale and  St. James Town.

Expected to take a minimum of two years to complete, the pedestrian bridge and tunnel will be entirely replaced, while installation of a barrier-free accessible path from the north side of Bloor St. East to Sherbourne Subway station to the south will be constructed.

First documented in 1884, the historic bridge which is a designated heritage property, has been in a state of decline for the last twenty years– previous bridge rehabilitation was completed in 2001 and emergency repairs to the structure occurred in 2015.

Prior to bridge removal and reconstruction which is slated to begin in early spring, preparatory undertakings include traffic control set-up, tree protection and removal, and implementation of erosion control measures.

Renamed the Morley Callahan Footbridge in 1992, the rehabilitation will see the bridge width increased by more than one metre enhanced LED lighting along the railing and barriers and the addition of a suicide prevention barrier.

The tunnel and south landing will also see an increase in width, enhanced strip lighting in the celling corridors and a new, up-to-code staircase.  Located just south of the tunnel, the Glen Road Public Space will receive a new planting area and retaining wall, security cameras and an emergency intercom system. Other additions include a bike share station, while artwork by Inuit sculptor, Couzyn Van Heuvelen will be displayed in the tunnel’s exterior and interior, centred around the theme of migration and travel.

The bridge and tunnel will be closed for the full duration of construction. Several lane closures will occur on Bloor St. E., and bike lanes temporarily removed; however, full pedestrian access will be maintained.

To facilitate work on the project, 127 trees will be removed from the Rosedale Valley ravine, but according to the city’s Urban Forestry Division, approximately 400 trees and 1,000 shrubs will be replanted on site following the construction.