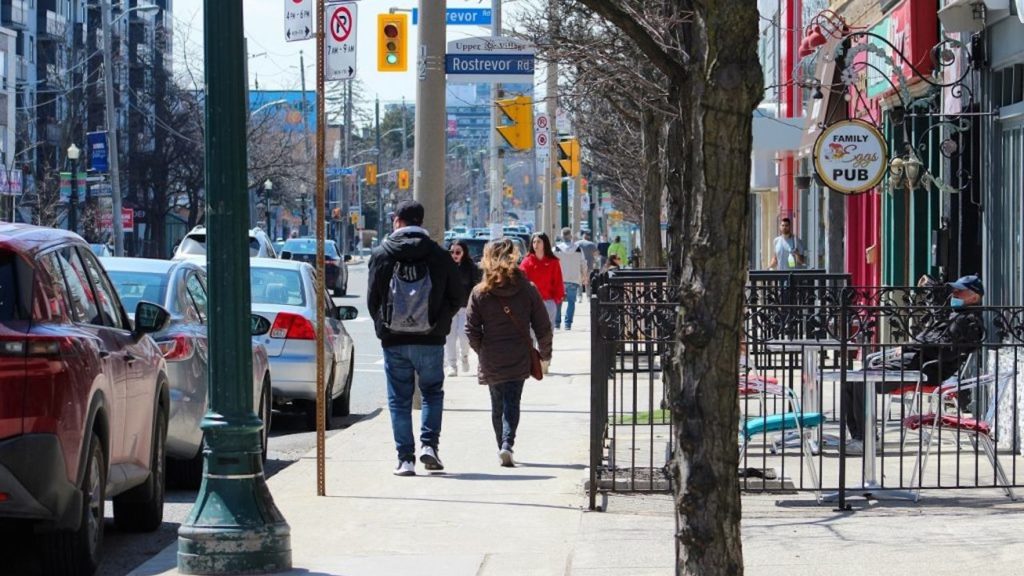 A new city project that, with a green light from council, would bring several kilometres of permanent, protected bike lanes to Eglinton Avenue as early as next year is garnering some Midtown community support — while raising questions about parking and traffic.

Earlier this week, the city held its first public consultation to discuss the eglintonTOday Complete Street Project, which aims to transform the arterial road between Keele Street and Brentcliffe Road, by the Don Valley, into a “complete street” (the city defines these as “streets that are designed to be safe for all users”).

The project is based on the longer-term EglintonConnects plan, which was adopted by council in 2014 and sets out a vision for more public space, greenery, and cycling infrastructure throughout 19 kilometres of the Eglinton corridor.

EglintonTOday’s first phase, which is the current subject of consultation, spans roughly seven kilometres between Keele and Mount Pleasant Road (the second phase continues to Brentcliffe and would be started once the first is implemented).   The project fills in gaps between the streetscape changes that Metrolinx is making during construction of the Crosstown LRT — including disjointed sections of bike lanes fronting new stations — and coincides with the new transit line’s anticipated opening.

Planning is in the early stages, but whatever staff recommend to council by 2023 should look familiar to Midtown residents. The project uses the same “quick-build” approach as the ActiveTO Midtown Complete Street Pilot that put bike lanes on Yonge Street. That means, rather than major reconstruction, there will be lane repainting, physical separation for cycle tracks, curb and patio extensions, planters, and art installations.

While community feedback shapes design to an extent, Hayward notes that some form of continuous cycling infrastructure along Eglinton will likely be recommended to council because of the EglintonConnects plan.

“That’s the endorsement that we have from council, so that’s the starting point that we, from staff, are working from,” she says.

Multiple participants expressed support for the plan at the inaugural June 22 eglintonTOday meeting, which was held online and did not display commenters’ identities. But more than one raised concerns about traffic implications, especially for the stretch of Eglinton that feeds into the Allen Road expressway.

“The fact that you are suggesting that a bike lane could run along Eglinton, westbound from Bathurst, and cross over this highly, highly congested intersection and entranceway to the highway, to the freeway of Allen Road — respectfully, it loses credibility,” said one commenter of the plan and consultation process in general.

City staff note that no specific street configurations have been finalized but that the project always maintains at least one lane of traffic in either direction.  On the question of parking, which also came up at the meeting, Hayward acknowledges that it’s not possible to maintain the current number of spots along Eglinton and create a complete street.

“The exact number along Eglinton itself? No,” she says. “We’ll need to balance the desires of the community.”

Parking isn’t a concern for Louroz Mercader, manager for the York-Eglinton BIA, whose boundaries extend from Marlee Avenue to Dufferin Street, on Eglinton. However, he says his BIA wants a flexible design so that it’s easy to host street festivals (Mercader notes how Taste of the Danforth organizers cancelled the event this year, citing planning complications related to bike lanes).

“Festivals and events are the lifeblood to BIAs and communities that drive new visitors into the neighbourhood, so we need to be able to have a flexible design to have those,” says Mercader. “We’d love to see the bike lanes, but we want to see a flexible design to allow us to close down the street to have these full-on festivals in the future.”

“We support this project,” says Alison Stewart, senior advocacy manager for CycleTO. “There are lane reductions, there’s building safe-separated bike lanes, and using street beautification and greenery to basically improve the streetscape and make it safer for everyone.”