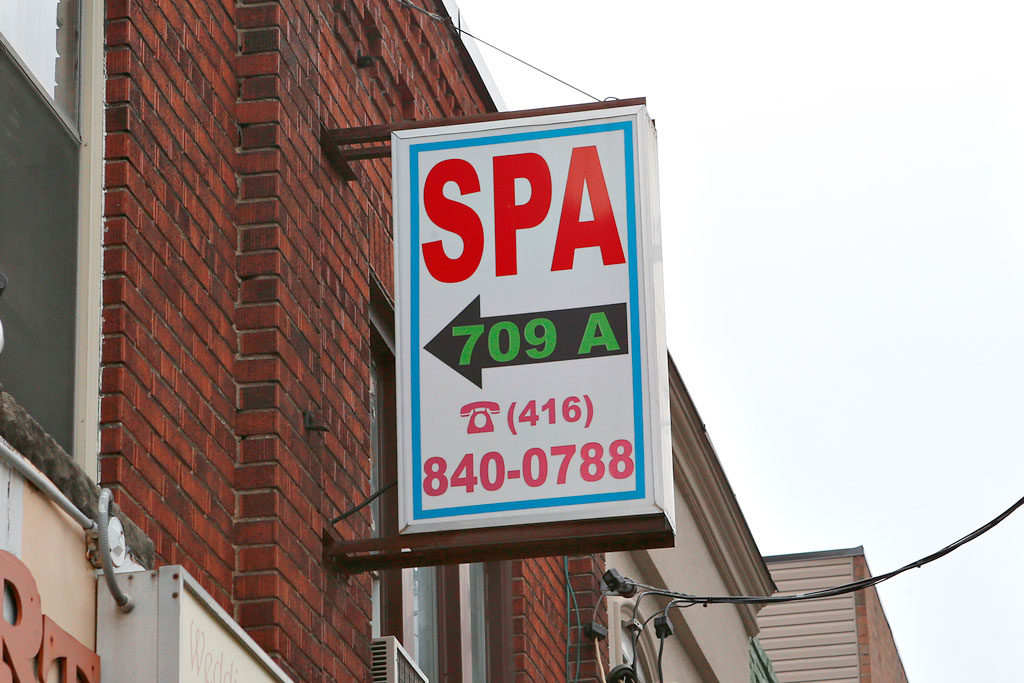 In February, City of Toronto staff are expected to report back to city council on the feasibility of increasing the number of licences granted to so-called body-rub parlours in Toronto. Staff were also instructed to look into acquiring additional equipment and hiring more staff to oversee regulation and enforcement of the current bylaws. One option outlined by staff in December suggested allowing an additional 53 licences to offset the cost of regulation.

The increase is intended to prevent illegal and unlicensed operations, often masquerading as holistic centres, from sprouting up in unsuspecting residential neighbourhoods.

A holistic centre — which is defined by the city as a place offering services that focus on wellness of the body, mind, spirit and emotions, such as reiki, aromatherapy and massage therapy — requires a licensing fee of $270, with an annual renewal fee of $148. By comparison, a body-rub parlour licence costs $13,102, with an annual renewal fee of $12,660, and employees must submit to a medical examination.

Body-rub parlour premises are zoned to industrial areas, away from schools, places of worship and prying eyes, whereas holistic centres may occupy residentially and commercially zoned neighbourhoods.

A report by Toronto’s auditor general in October 2017 found at least 107 of the city’s 410 holistic centres were providing a range of “unauthorized” sexual services.

One client of a licensed parlour, who spoke to Post City, requesting anonymity, said everything about his experience was above board. He said that the women working in the first parlour he attended were communicative and expectations were laid out clearly. A touch screen enabled him to choose his masseuse and while she did not offer sex, he indicated some masseuses do at various rates and that anything “extra” — nudity, client touching or bodily contact — came with a fee. The facility was clean, had showers for the clients and was devoid of any menacing, “pimp-like” figures, he said.

“Sex work will continue to happen. Relegating it to a zone or wishing it away isn’t effective.”

His first visit was borne out of curiosity, but he has since attended different licensed and unlicensed parlours –– according to him, over 20 times.

“I know many guys that have been to a body-rub parlour, and I know a lot more guys that have never been,” he said. “It’s also a place that a lot of married men attend and sort of blurs the line between acceptable monogamy and cheating.”

He said the number of fraudulent centres identified by the auditor general sounded low, and that the possible increase in licences granted to body-rub parlours is a sign of the times.

“There’s simply fewer lawmakers that would be against this kind of thing,” he said.

Councillor Mihevc, who is also the chair of the Toronto Board of Health, said the increase would help further ensure that the women working in body-rub parlours do so in a safe and clean environment.

Jenn Clamen, of the Canadian Alliance for Sex Work Law Reform, noted that the commodification of sex has existed for centuries and criminalizing it puts the workers at a disadvantage.

“When you have a context of criminality, it allows exploitation to flourish because there is no recourse,” Clamen said. “Despite what people think, there is a fundamental right that needs to be respected, and that’s the health and safety of sex workers.”

She also argued that isolating body-rub parlours in the outskirts of the city won’t encourage unsanctioned ones to purchase a licence as many operators would likely fear the drawback of having so much competition nearby.

“[Sex work] will continue to happen. Relegating it to a zone or wishing it away isn’t effective,” Clamen said. “You wouldn’t put all the nail salons or McDonalds in the same zone.”

“Until we have the ‘Wild West’ of illegal operators [contained], we can’t open more,” Pasternak said. “We should be reviewing body-rub rules as well. I think we need a wholesale review of those policies and enforcement, which is the only way to regulate and clean up this mess.”

“It’s our responsibility to protect our neighbourhood and our school-aged children,” he added.