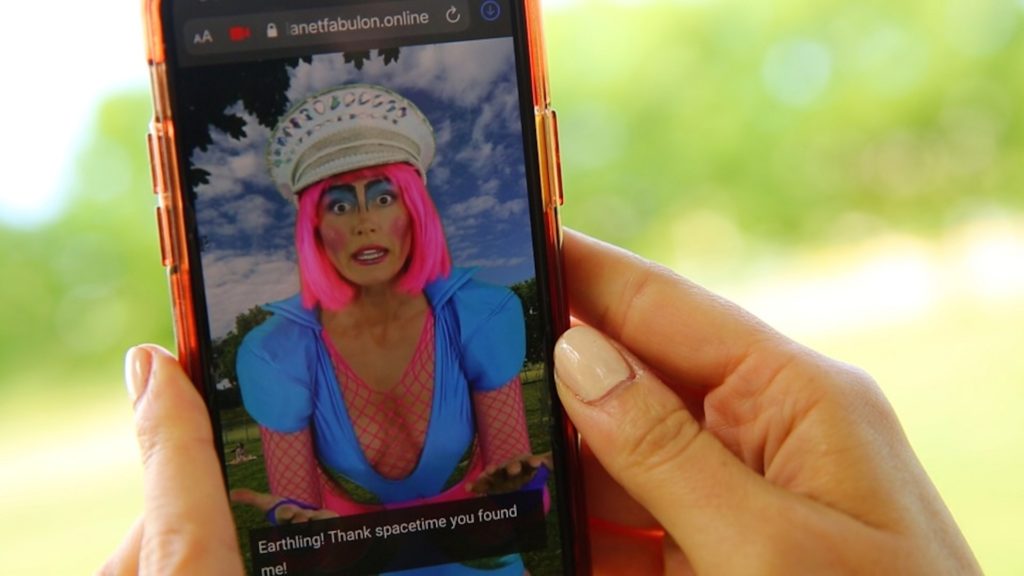 Running right now until July 18, an interactive augmented reality scavenger hunt is taking place at Christie Pits Park. The 30-minute interactive “Splinter-Dimensional” hunt will bring attendees on a journey through the park to look for clues using QR codes with the ultimate goal of saving the story’s hero.

Splinter-Dimensional is commissioned by the Luminato Festival and was created by Planet Fabulon, an immersive event company. The story is based on a Fabulon character called The Captain, who has made an interdimensional teleporter trip to Earth to throw a party. Still, the teleporter gets stuck over Christie Pits park, where attendees must save her. Natch.

Those who successfully save The Captain will receive an automatic invitation to an AR dance party on July 18 featuring Toronto DJ Me Time. Planet Fabulon created this scavenger hunt to let GTA residents come out and play without worrying about current Covid-related stress.

“We want to get Torontonians out of their homes and in sync with their inner child,” says Anna Douglas, Planet Fabulon event organizer, and actor who plays The Captain. “When we were invited to participate in Luminato’s Creative Current programming this year, we knew we would still need to lean into technology to dream up a safe event. But we want to get folks back outside in the real world! How? By using augmented reality to create a physical adventure designed with safety, accessibility, and most importantly, our particular brand of sci-fi whimsy in mind.”

The Planet Fabulon event kicked off today and runs from noon until 8 p.m. until July 16 and then from 10 a.m. until 8 p.m. this weekend. Participants can join at any time, and there’s no cost to participate — make sure to bring your phone to take part in the entire experience.